NYT Peddles ‘From Time Immemorial’ Hoax About Palestine as Fact

Instead of informing readers about the truth, the New York Times peddle Joan Peters' hoax about Palestine from her book "From Time Immemorial". 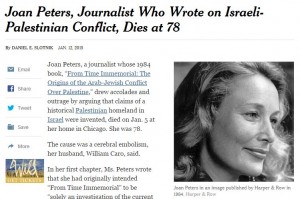 Two weeks ago, the New York Times had a piece about the death of Joan Peters, author of the book From Time Immemorial, which perpetrated the hoax that when the Zionists arrived there to establish their “Jewish state”, Palestine was an uninhabited land, and that the Arabs migrated there only after the Zionists had made the desert bloom. But instead of informing readers about the truth, the Times itself decided just to re-peddle the hoax.

Here’s the letter I wrote to the editor:

In his piece on the death of Joan Peters, author of From Time Immemorial, Daniel E. Slotnik writes that historical documents show “that Arab settlers had flocked to Palestine beginning in the late 1800s”; then Mr. Slotnik describes the displacement of Arabs from Palestine in 1948 as a “widely accepted narrative” and quotes Hebrew University professor Yehoshua Porath characterizing it as a “myth”.

It is a disservice to Times readers to leave them with the false impression that the increase in the Arab population was due to immigration when in fact, as noted by the UN Special Committee on Palestine, it was “almost entirely” due to natural increase (an observation also made by the Anglo-American Committee of Inquiry). And it is a well-documented and uncontroversial historical fact that three-quarters of a million Palestinians fled or were driven from their homes—never allowed to return—during what Israelis call their “War of Independence” and Palestinians call “the Nakba”—their “catastrophe”.

A correction is warranted to properly inform readers of the truth.

Of course, I did not expect my letter to be selected for publication, and the Times did not surprise me.

“The New York Times peddles Joan Peters’ hoax about Palestine from her book ‘From Time Immemorial'” [Tweet this!]

I provide a lot more examples of the Times’ absolutely disgraceful reporting on the topic of Palestine in my forthcoming book, Obstacle to Peace: The US Role in the Israeli-Palestinian Conflict. I show what and how the Times has reported over the years and then systematically dismantle their propaganda. I take down Ethan Bronner, Isabel Kershnher, and the entire editorial board.

If you want to better understand how the US mainstream media serve to manufacture consent for the US government’s policy of supporting Israel’s crimes against the Palestinians, you won’t want to miss it. To stay notified, please sign up for my free newsletter.