NYT Reports As Fact That East Jerusalem Is Part of Israel

The consistently prejudiced nature of the New York Times's reporting on the legal status of East Jerusalem is absolutely disgraceful.

The consistently prejudiced nature of the New York Times’s reporting on the legal status of East Jerusalem is absolutely disgraceful. But the Times has outdone itself passing off a lie as factual information with a recent article.

Earlier this month, the Times published a piece with the title: “A Celebration of Jerusalem’s Unification Helps Point Up Its Divisions“. So right from the get-go, the Times reports as though fact that there has been a “Unification” of Jerusalem, implying that all of Jerusalem is part of the state of Israel.

The next thing the reader sees is the following image and caption: 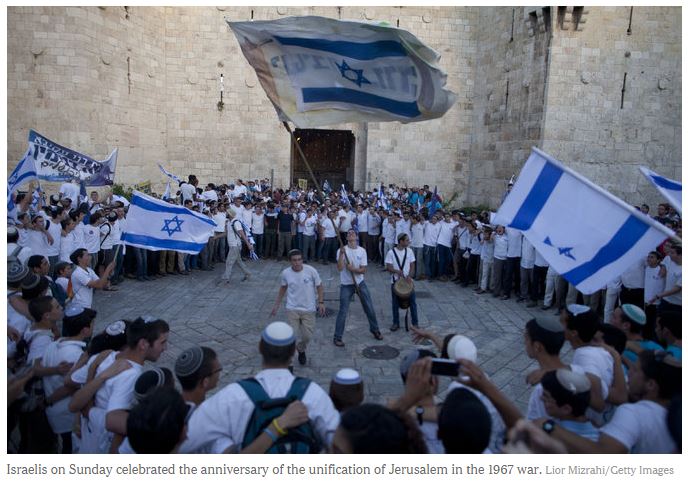 Note that the caption, too, asserts as though fact that a “unification of Jerusalem” occurred during the 1967 war. Neither the title nor the photo caption suggest this is merely the Israeli view. It is simply as though this was true. The article begins:

JERUSALEM — Umm Nidal peered over her balcony in Jerusalem’s walled Old City on Sunday, watching thousands of marchers waving Israeli flags stream through an alleyway as they celebrated Israel’s unification of the city in the 1967 war.

So reading no further than the lead paragraph, already three times the Times has asserted as fact that all of Jerusalem is Israeli territory. A bit further down, the Times reports:

“I think there’s a legitimate joy and celebration of the return to the Old City of Jerusalem,” said Rabbi Aaron Leibowitz, 47, a city councilman.

But, again, there is no hint that this alleged “return” of East Jerusalem to Israel is merely an Israeli claim. After quoting the rabbi, the Times states:

The 330,000 Palestinians of East Jerusalem form roughly one-third of its population, but they are more residents than citizens. They may apply for citizenship, but most do not because they believe it would legitimize Israel’s occupation of a city they seek as the capital of their own future state.

So the Times again reinforces the assertion that East Jerusalem is part of Israel while presenting the view that it is rather under occupation as being merely a point of view of the Palestinians. Dismissing this view and adopting the Israeli position as though fact once again, the Times adds:

Some 20,000 homes have been built illegally, because it is extremely difficult for Palestinians to obtain permission to build.

That is the article’s final word about the legal status of East Jerusalem. Thus, according to the New York Times, while Palestinians are resentful of it and don’t see it the same way, East Jerusalem is a part of Israel.

This is astonishingly disgraceful reporting, even by New York Times‘ standards. Never mind that it is a completely uncontroversial point of fact under international law that East Jerusalem is occupied Palestinian territory and Israel’s measures to annex the city illegal, null, and void.

A relevant excerpt from my forthcoming book, Obstacle to Peace: The US Role in the Israeli-Palestinian Conflict:

In July 2004, the International Court of Justice (ICJ) issued an advisory opinion at the request of the UN General Assembly that reaffirmed that “all these territories (including East Jerusalem) remain occupied territories and that Israel has continued to have the status of occupying Power”. The ICJ also determined that Israel’s settlements in the West Bank, including Jerusalem, “have been established in breach of international law.”[2]

[2] International Court of Justice, Legal Consequences of the Construction of a Wall in the Occupied Palestinian Territory, Advisory Opinion, July 9, 2004.

Another relevant snippet relating to both Jerusalem’s status and the New York Times’s deceptive reporting about it:

Demolitions of Palestinian homes in the West Bank had “escalated alarmingly” that year, UNRWA reported in early August. There had been 356 demolitions displacing 700 Palestinians in the first six months of 2011 compared to 431 demolitions with 594 displaced for the whole of 2010. “Most demolitions have targeted already vulnerable Bedouin and herding communities,” said Christopher Gunness. “In many cases, demolition orders have been issued to virtually the whole community, leaving these communities facing a real danger of complete destruction.”[1]

Israel proceeded to approve another 900 housing units in East Jerusalem. While the US remained silent, the EU condemned the move and reemphasized that all of Israel’s settlement activities, “including in East Jerusalem”, were “illegal under international law.”[2]

The following week, Israel announced the approval of a 1,600 apartment complex and said it would approve 2,700 additional housing units in East Jerusalem in a matter of days.[3] The EU again condemned Israel’s illegal actions.[4] Israel’s announcement had come “a day after President Obama spoke with Prime Minister Benjamin Netanyahu of Israel by telephone”, the New York Times perceived. The State Department’s only comment was that Israel’s settlement activities were counterproductive in terms of the goal of getting the Palestinians “back to the table”. In another typical example of how the Times frames the discussion through deceptive language, it described East Jerusalem as “disputed” land solely on the grounds that “Israel’s government has said it regards all of Jerusalem as its capital”, thus lending equal weight to Israel’s position as that of the rest of the planet that its annexation was illegal, null, and void under international law.[5]

I go into much greater depth about the New York Times’s absolutely despicable reporting on the Israeli-Palestinian conflict in the book. Coming soon! Be sure to sign up for my free newsletter stay updated.