Paul Krugman Admits Ignorance of How an Economy Grows

Paul Krugman can't see how to achieve long-term economic growth because he is a high priest of the state religion with unwavering faith in central planning.

In a recent New York Times column, Paul Krugman admits that Keynesian economists don’t know how to centrally plan the economy to cause long-term growth. He writes:

[L]et me tell you about a dirty little secret of economics — namely, that we don’t know very much about how to raise the long-run rate of economic growth. Economists do know how to promote recovery from temporary slumps, even if politicians usually refuse to take their advice. But once the economy is near full employment, further growth depends on raising output per worker. And while there are things that might help make that happen, the truth is that nobody knows how to conjure up rapid productivity gains.

Of course, when he says “Economists” and “we”, he isn’t speaking for all economists, just Keynesians. Austrian economists could tell Krugman precisely why it is that central planners don’t know how to create long-term growth. In fact, the answer is right there in Krugman’s comment.

Krugman boasts that they “know how to promote recovery from temporary slumps” — a reference to the Keynesian prescription of monetary inflation to push down interest rates to incentivize borrowing and spending. And if interest rates can’t go any lower, then the government should step in and do the spending.

That is, Keynesians think that creating currency out of thin air and can create wealth. They think that a government going deeper into debt is helpful to get the country’s economy back on the road to growth. They think that government bureaucrats making decisions at best arbitrarily know better than the free market with its pricing system how to efficiently direct scarce resources towards productive ends.

Krugman’s record on the business cycle is instructive for illustrating the error of his Keynesian ways and why he is unable to understand how to achieve long-term economic growth.

In the wake of the collapse of the NASDAQ bubble, Krugman advocated a Fed policy of low interest rates specifically in order to fuel a boom in housing. All that borrowing and spending would get the economy back on track to growth, he believed.

And it did — sort of. The housing sector did indeed boom. But it wasn’t sustainable growth. It was a Fed-induced bubble that inevitably just led to another bust.

Yet Krugman still failed to see that the problem was the bubble caused by artificially low interest rates (meaning rates below where they would otherwise be if determined by the market rather than central planners attempting to steer the economy). To Keynesians, the problem is not the boom, but the bust. And the answer to the bust caused by Fed monetary inflation is even more monetary inflation, only on an even greater scale.

Here’s what the Fed has done to the base money supply since the recession caused by the housing bubble going bust: 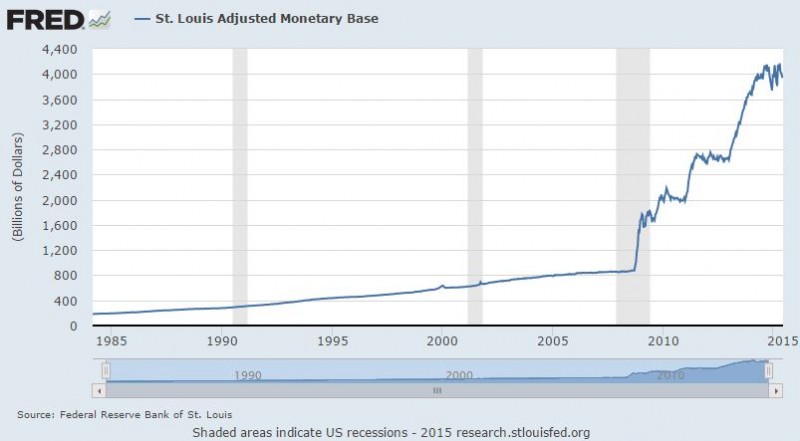 Of course, this just produces more illusory “growth” and sets the economy up for the next, even worse, bust.

Keynesian economists like Krugman fail to understand that the problem isn’t the bust, it’s the artificial boom. They see the bust as the disease and central planning as the cure. But central planning is the disease, the bubble is a symptom, and the bust is the cure. The bust is the market correction required to liquidate the malinvestment caused by the central planners’ attempts to steer the economy where they want it to go rather than letting the market determine where and how resources are directed.

Of course, the central planners do everything they can to prevent the market correction, thus preventing the patient from being cured. It is quite a bit like treating the heroin addict by doubling his dose of heroin in order to prevent symptoms of withdrawal.

Yes, if the Fed didn’t act to lower interest rates during the bust, there would be a deeper recession. But that is necessary. It would be deeper, but shorter. If the market correction was allowed to occur, the economy would be able to get back on track to real growth.

By disallowing this, all the central planners end up doing is prolonging the agony and setting the economy up for the next crash.

Ergo, to achieve long-term economic growth, the central planners ought to get out of the way and let the market decide how resources are directed.

Krugman can’t see that because he is a high priest of the state religion who will never give up his faith in central planning.

With that in mind, his column gets really funny. He goes on to criticize Jeb Bush for espousing the belief “that the growth in Florida’s economy during his time as governor offers a role model for the nation as a whole.” He thinks that is funny; and of course, he’s right about that, it is ridiculous. But his reason for thinking its funny is funny.

He goes on: “Why is that funny? Because everyone except Mr. Bush knows that, during those years, Florida was booming thanks to the mother of all housing bubbles. When the bubble burst, the state plunged into a deep slump, much worse than that in the nation as a whole.”

[T]he Federal Reserve successfully replaced the technology bubble with a housing bubble. But where will the Fed find another bubble?

Then he goes on to criticize Republicans for calling for tax cuts to help the economy grow. Yet here is what Krugman had to say about the Bush tax cuts in 2002:

Here’s the story so far: In 2000 the bubble finally burst. As investors and businesses rediscovered the law of gravity, business investment plunged, and the economy slumped. Then the situation stabilized, more or less. Repeated interest rate cuts encouraged families to buy new houses and refinance their mortgages, putting cash in their pockets; yes, the tax cut also made a marginal contribution. Strong housing demand and consumer spending partly offset the lack of business investment. And so the economy began growing again.

And there again, we see Krugman doing the exact same thing he laughs at Jeb Bush for doing — namely, pointing to the already-forming housing bubble induced by the Fed’s response to the previous bust as the path to growth.