In his latest Friday column, titled “Crazy About Money”, Paul Krugman mocks Ted Cruz for “calling for a return to a gold standard”, which is “very much a fringe position among economists.” He adds:

In fact, many economists believe that a destructive focus on gold played a major role in the spread of the Great Depression.

The link is to an article describing how former Fed Chairman Ben Bernanke explaining how the Fed at the time was constrained in its money printing due to the gold standard; this lack of monetary expansion is then attributed as causing the Great Depression.

But then Krugman says something that illustrates the fallacy of his own argument:

As recently as 2004, Bush administration economists lauded the very kind of policy activism a return to the gold standard is supposed to prevent, declaring that “aggressive monetary policy can help make a recession shorter and milder.”

Of course, Krugman isn’t saying these Bush administration economists were wrong about this; he’s saying they were right.

What happened was that at the peak of the NASDAQ bubble, Paul Krugman was proclaiming how wonderful the US economy was, how it had nowhere to go but up; then it burst, and he began advocating that the Fed push interest rates lower specifically in order to fuel a boom in the housing industry. Which it did, blowing up the housing bubble that eventually burst, as a bubble must, in turn precipitating the financial crisis and “Great Recession”, prompting Paul Krugman to advocate that the solution is still more money printing.

See, the Fed’s money printing didn’t make the recession “shorter and milder”. On the contrary, by preventing the necessary market correction, the Fed simply prolonged the agony and set the stages for the next, even more destructive bubble, the response to which in turn has now set the stage for an even worse economic crash (notwithstanding the government and media’s proclamations about the fundamental good health of the US economy).

Of course, then Krugman goes into his usual psychological projections, attributing to others that which he suffers from to an even greater extent. Paul Ryan is “a true believer on monetary policy” for having warned that the Fed’s monetary inflation would devalue the dollar when the government’s measure of price inflation has actually remained below target. Believing something beyond all evidence is “monetary faith”. 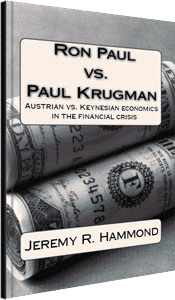 So let’s apply Krugman’s own standard: He is indeed a true believer on monetary policy, first advocating the Fed policy that caused the housing bubble and consquent recession, then calling for even more of the same to solve the problem created by money printing in the first place and mocking anyone who suggests that perhaps this isn’t so bright an idea.

For the whole story on Krugman’s record on this subject, see my book Ron Paul vs. Paul Krugman: Austrian vs. Keynesian Economics in the Financial Crisis.

Learn More About the Book!
Donate