‘Obstacle to Peace’ Is Indictment of US to Be Reckoned With: Barron’s

Obstacle to Peace: The US Role in the Israeli-Palestinian Conflict is an exhaustively researched and damning indictment, says a Barron's review of the book.

Barron’s this morning published a review of my book Obstacle to Peace: The US Role in the Israeli-Palestinian Conflict describing it as a comprehensive and damning indictment of US policy that must be reckoned with by anyone who believes the so-called “peace process” has been intended to bring about the two-state solution. 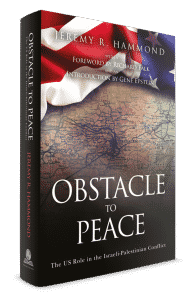 Scott McConnell writes, “This work of contemporary history is an exhaustively researched indictment of America’s policies toward Israel and the Palestinians that will surprise those schooled in the mainstream version of the conflict.”

While the mainstream narrative portrays the US as an “honest broker” attempting to fairly mediate between the two parties, my book “argues persuasively that while an international consensus favoring a Palestinian state alongside Israel in its 1967 boundaries has long existed, the United States has used every tool in its diplomatic arsenal to thwart movement toward a resolution.”

It’s a “comprehensive and damning charge” against the US government that includes “persuasive evidence” of US complicity in Israel’s war crimes during its 22-day full-scale military assault on Gaza from December 27, 2008 to January 18, 2009 ­(“Operation Cast Lead”).

“This account of the Gaza assault makes painful reading: a well-trained high-tech army set on teaching a lesson to a trapped and more or less defenseless population.” Meanwhile, President-elect Barack Obama “all but hid from the media to avoid voicing an opinion of the slaughter.”

The book also “piles up one example after another” of the US media’s propagandistic reporting on the topic, which serves to manufacture consent for the US’s duplicitous and criminal policies.

“Obstacle to Peace must be reckoned with,” McConnell writes, “by all those who thought that the peace process initiated at Oslo in 1993 and overseen since then by the United States would bring forth both a Palestinian state and a long sought peace between Israelis and Palestinians.”

Click here to read the full review! (Second review on the page; may be behind a paywall.)

Order your copy of Obstacle to Peace now!