Is the Two-State Solution Dead and Buried?

Milena Rampoldi of the blog ProMosaik interviews me about Palestine, including whether the two-state solution is dead, and the state of journalism.

Milena Rampoldi of the blog ProMosaik asked me a few questions this week about the prospects for the two-state solution, how the Trump administration’s policy is likely to approach the Israel-Palestine conflict, Israel as a neo-colonialist project, the poor state of mainstream journalism, and how independent journalists, writers, and activists can make a difference.

Here is the full text of the interview:

Do you believe the two-state solution is definitively buried?

Israel and the US certainly have been working hard for decades to bury it, but, no, I do not believe they have succeeded.

On the contrary, I think right now there is a unique opportunity for the Palestinians to move forward and accomplishing an end to the Israeli occupation, which is essentially equivalent to implementing the two-state solution.

The leadership should pursue legal remedy for the Occupying Power’s crimes against the Palestinian people through the international mechanisms that have been available to Palestine since the UN recognized it as a state in 2012; most specifically, through the International Criminal Court (ICC).

What do you believe the next moves of the Trump administration will be in Palestine/Israel and Middle East?

He’ll likely try to pick up the baton from the previous administration and make a feeble and vain effort to restore credibility to the US-led so-called “peace process”.

He might, for example, try to persuade the Netanyahu government to implement some kind of limited scaling back of Israel’s illegal settlement activity in the West Bank.

The good news is that with Trump in the Oval Office, it seems unlikely the “peace process” could regain any traction even among other governments of the world (it has long since ceased to have any credibility among the publics of the world).

This presents the Palestinian leadership with an opportunity. They must take advantage of the political leverage they gain so long as the “peace process” is dead on account of Israel’s refusal to even limit its illegal activities.

If the Palestinian Authority (PA) won’t do what is necessary, the Palestinian people should rise up and dissolve that body – which the PLO has the authority to do – and find new leadership who will.

For me personally, Israel is a neo-colonialist project. What do you think about it?

It is certainly a neo-colonialist project.

Going back to the Mandate era, the League of Nations’ Palestine Mandate was literally drafted by the organized Zionists, the aim being to implement an occupation regime that would accommodate their goal of displacing and dispossessing the Arab inhabitants with mass waves of Jewish immigration.

The idea was that the right to self-determination of Palestine’s inhabitants would not be respected until the Jews became a majority.

This was in keeping with the British and Zionists’ concept of “the democratic ideal” (as discussed between Lord Arthur Balfour and Zionist leader Chaim Weizmann).

It was a colonialist project from the outset, and so remains today.

Tell us about your books!

In late 2008, when Israel began its 22-day full-scale military assault on Gaza dubbed “Operation Cast Lead”, I watched with disgust how the US mainstream media waged a propaganda war against the public, a systematic campaign of deception that served the purpose of manufacturing consent for the US government’s support for Israel’s war crimes against the civilian population of Gaza. I became determined to write a book about it to set the record straight. (My coverage of the US’s support for Israel’s war crimes during that conflict resulted in me receiving a Project Censored Award.) 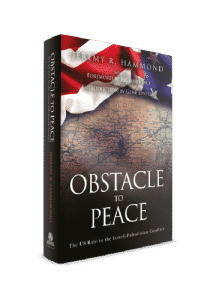 But I didn’t just want to write about that operation. I wanted to explain the whole conflict in context, to help others understand why this conflict has persisted for so long. Only by fully understanding what the greatest obstacles are can we determine how to move forward. What is required is a paradigm shift, a change in the way the public perceives this issue. We need to fight the propaganda and get the truth out. That is why I set out writing Obstacle to Peace: The US Role in the Israeli-Palestinian Conflict (2016)

But before I could explain contemporary events, I would need to provide the necessary historical background and explain what the root causes of this conflict are. That would require examining the period from the rise of the Zionist movement in the late 1800s through to the establishment of the state of Israel in 1948 via the ethnic cleansing of Palestine. So I ended up splintering my book idea and writing a short book titled The Rejection of Palestinian Self-Determination: The Struggle for Palestine and the Roots of the Israeli-Arab Conflict (2009). 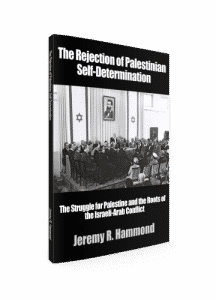 Obstacle to Peace presents historical context as necessary in order to understand more recent events (it focuses primarily on the last decade), but readers will even get more out of it if they first read The Rejection of Palestinian Self-Determination as a primer to understanding how the conflict originated. Obstacle to Peace will then help readers understand why the conflict persists, how the mainstream media serve to help perpetuate it, and what needs to happen for peace and justice to finally be realized.

How to engage for Palestine today as human rights activists, writer and journalists?

Everyone has their own strengths in terms of knowledge and skills, and it’s up to the individual to determine how best to apply those skills toward achieving peace and justice.

My own strengths include research, analysis, and writing, so that is where I’ve focused my energy. I can’t advise others how to focus their energy without knowing their individual strengths.

Generally, however, we must continually educate ourselves and then share that knowledge with others until a tipping point is reached and the necessary paradigm shift occurs at which point it will become politically infeasible for the status quo to persist any longer.

Which are the main objectives of Foreign Policy Journal?

I established FPJ to serve as an antidote to the propagandistic reporting of the mainstream media, which serve the role of manufacturing consent for government policy.

I’m borrowing this phrase from Edward Herman and Noam Chomsky, from their book Manufacturing Consent; they were in turn borrowing the phrase from Walter Lipmann, who had written in the early 20th century about the need for the ruling elites to manufacture the consent of the ruled for the policies they wished to implement to pursue their own self-interests (as opposed to the interests of the public).

It’s my goal with FPJ to help others become better informed about the true nature of US foreign policy and international affairs, as this is a task at which the mainstream media have utterly failed us.

This interview was originally published at ProMosaik.