Disturbing the Peace: A Film on Ending the Israeli Occupation ‘With Your Own Hands’

The film Disturbing the Peace provides great insight into the conflicting perspectives between Israelis and Palestinians—and how peace will be realized.

Disturbing the Peace is a documentary film about a group of Israelis and Palestinians who have formed an unusual partnership to work for an end to the Israeli occupation. It begins with their individual stories about how they went from viewing the other as the enemy to making the effort to see things from the other’s perspective and, ultimately, to gaining empathy and rediscovering that bond of shared humanity.

Each story provides fascinating insight into just how critical to the conflict is the matter of perception.

The Palestinians’s perspective, naturally, is that the Israelis are their oppressors. While not generalizable to every Israeli citizen, it is observably true that the state of Israel is occupying their land and oppressing them; it is an accurate perception.

The Israelis’ stories, on the other hand, reveal the great extent to which the policies of the state of Israel depend on manufacturing the consent of its citizenry—which it accomplishes by convincing its citizens to maintain a fantastical worldview ungrounded in reality.

The film’s message is one of hope. And the story of how these Israelis and Palestinians came together to form the organization Combatants for Peace is indeed inspiring. Yet the film also demonstrates the staggering obstacles standing in the way of a just peace between the two peoples—including the obstacle of overcoming the many popular and deeply held misconceptions about the nature of the conflict between them.

To illustrate, the Israeli perspective with respect to what occurred in 1948 is essentially that Arab invaders attacked their country with intent, at best, to deny them their right to self-determination or, at worst, to wipe out the Jews in an organized campaign of genocide.

The Palestinian perspective of the same events is that Zionist forces occupied their villages and expelled them from their homes, never permitting them to return to the land their families had lived on and worked for generations.

One of these perceptions is accurate.

The Israeli state’s propaganda version of history—a version of history all-too-readily adopted by the US and other Western governments—maintains that the creation of the Palestinian refugee problem was an unfortunate result of the neighboring Arab states committing aggression against the state of Israel. In truth, by the time the Arab states managed to muster a military response, hundreds of thousands of Arab Palestinians had already fled or been expelled from their homes by Zionist forces.

This legend taught to Israelis by their public school system is also premised on the assumption that the Zionists’ declaration of the existence of the state of Israel on May 14, 1948, was somehow legitimate. It is dubbed a “Declaration of Independence” in officialdom, and the war that followed a “War of Independence”.

Nor did the Zionists have any legal claim to most of the land that became “Israel”. At the time of the declaration, the minority Jewish community owned less than 7 percent of the land in the territory of Palestine; Arabs owned more land than Jews in every single district, including Jaffa, which included the main Jewish population center of Tel Aviv.

The Palestinians’ perception that Israel came into being via the ethnic cleansing of most of the Arab population, on the other hand, is a historically accurate one. To them, the war of 1948 is al-Nakba, the Catastrophe. It was emphatically not a war by Arabs to deny Jewish Palestinians their right to self-determination, but a war by the militarily superior Zionist forces to deny the Arabs the exercise of that same right.

Indeed, the League of Nations’ Mandate for Palestine was drafted by organized Zionists with the goal of denying self-rule to Palestine until the Jews had through mass immigration succeeded in establishing a majority. When it became evident that such means of establishing a “Jewish state” would prove untenable, the Zionist leadership turned to other means: the “compulsory transfer” of most of the Arab population, as David Ben-Gurion worded it.

The Israelis’ perception that there legitimately existed a state called Israel populated by a majority Jewish population merely determined to exercise their right to self-determination in the face of irrational hatred from their neighbors is, simply stated, a legend.

This was the recollection of one of the Israelis, the memory being of hearing the news on October 6, 1973, that war had erupted.

The Israeli perspective of this war, as with the 1948 war, is that Israel was David once again facing the Arab Goliath. In state officialdom, this was another genocidal war grounded in pure irrational hatred of Jews.

It is true that the Arab states of Egypt and Syria initiated the war of 1973. That’s about where the accuracy of the Israeli perception ends. In truth, Egypt and Syria were not attacking Israel, per se, but Israeli forces occupying their land.

During the June 1967 war, Israel had invaded and occupied the Egyptian Sinai Peninsula and the Syrian Golan Heights, and the Arabs were making an attempt to expel the Occupying Power from their soil. This is a legitimate use of force under international law, even if some of the methods employed to achieve that aim were war crimes (i.e., indiscriminately shelling Israeli settlements).

But truth does not avail itself as well to Israeli policies as legend, so the legends are necessary.

The Palestinians’ stories include memories of families being made homeless by the demolition of their dwellings by Israeli forces and hearing the news of the massacre in the Sabra and Shatila refugee camps in Lebanon during Israel’s 1982 war there.

One of the Israelis recalls thinking, “I can’t understand why they hate us.” It takes no great imagination; this expressed perplexity reflects the sheer power of the Israeli state’s system of indoctrination, as well as how Israelis can overcome that brainwashing.

The Palestinians, too, have their systems of indoctrination.

One of their stories is that of a mom who relates how she had come to tell her young daughter that she had decided to go strap a bomb to herself and detonate it among a group of Jews (she didn’t put it in those words to her daughter, but nevertheless).

She never had the chance to carry out the plot as Israeli forces, evidently having gained knowledge of it, arrested her that very night.

In her prison cell, she encountered a female prison guard who had lost a loved one to a suicide bombing, but who, instead of expressing hatred toward her, expressed empathy and a desire for peace between their two peoples.

That willingness of an Israeli to empathize with the plight of the Palestinians deeply affected the would-have-been suicide bomber. When she was released from prison, as a result, instead of preaching a message of violence, she spoke of the need for non-violent resistance.

Empathetic words from a prison guard had broken the indoctrination that had led her to decide that leaving her daughter behind and ending her life (along with the lives of many Jews) was preferable to continued existence under the oppression of the Israeli occupation regime.

“Goodness is possible” was the lesson that experience taught her.

What it takes is for good people to break free of the chains their society binds upon them. 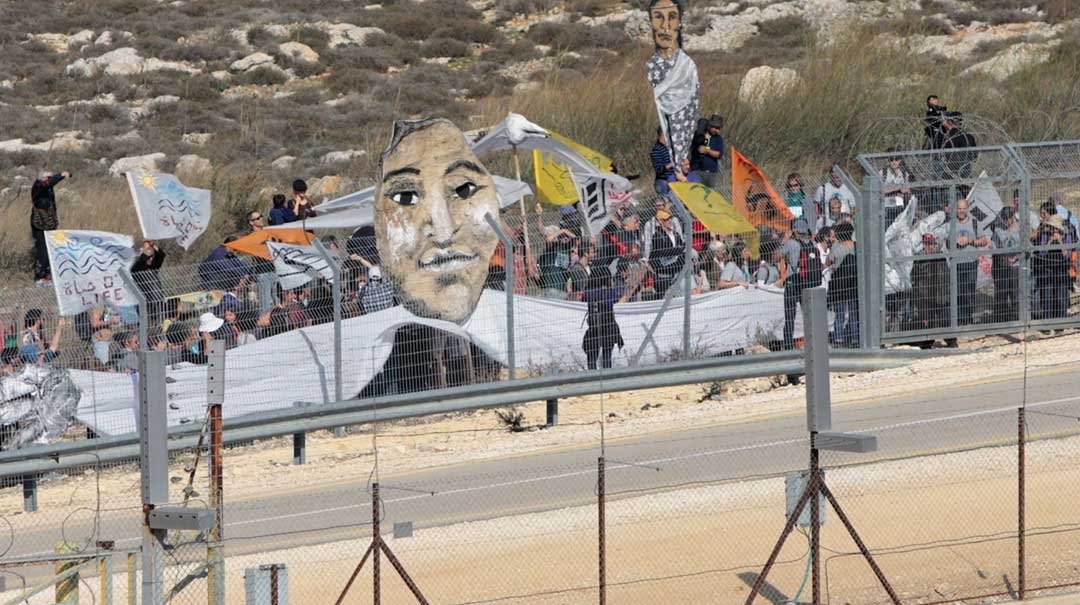 A scene from Disturbing the Peace.

A striking illustration comes toward the end of the film as Combatants for Peace holds a peaceful rally to protest the occupation—the Palestinians from one side of an Israeli fence and the Israelis from the other. In between, keeping the Arabs separated from the Jews rallying in solidarity, were armed Israeli soldiers and barbed wire.

One of those present recalled having the realization that the ones who were truly imprisoned in that moment were those soldiers. They were the ones confined between that barbed wire, trapped in the role that their society had defined for them, unable to break free of the constraints of hatred.

In contrast were the Israelis on the other side of that barbed wire who were rallying in solidarity with the Palestinians living behind the wall illegally constructed by Israel in the occupied West Bank.

“I’m not going to be part of this,” one of them recalls at one point in the film, his memory being of having just participated, as a soldier in the Israel Defense Forces, in the demolition of a Palestinian family’s home.

He made the choice to stop participating in his government’s crimes against the Palestinians, knowing well that doing so would earn him the resentment of those around him, including accusations of being a traitor to Israel and a coward.

Who are the real cowards, though? Those who dare to break free of those societal constraints or those who choose to participate in oppression simply because it’s what their society expects of them?

Perhaps the most important message of the film comes at the end, expressed profoundly through words spoken by Shifa al-Qudsi, the would-be suicide bomber who returned to motherhood and became “a messenger of peace” (as she’s been described by the New York Times):

“Don’t listen to your leaders. Challenge them. And create peace with your own hands, whether you are Palestinian or Israeli.

“You create peace in spite of them.”

If a critical mass of Israelis and Palestinians can hear those words and act on them, as Disturbing the Peace suggests is possible, then there is indeed hope.

Disturbing the Peace is directed by Stephen Apkon and Andrew Young, produced by Marcina Hale, and distributed by Bullfrog Films (running time 86 mins). To learn more about the film, visit DisturbingThePeaceFilm.com.