If some public vaccine policy advocates had their way, you would not be able to exercise your right to informed consent, one of the most fundamental ethics in medicine.

Public vaccine policy represents a serious threat to our health and our liberty. It constitutes an all out assault on our right to informed consent.

If some politicians had their way, you would not have any choice about vaccinating.

They pretend to care about the health of your child, but they do not.

If they cared about our children’s health, they would not lecture us about what the science says while perpetually demonstrating total ignorance of the science.

They would not advocate vaccination as a safe and effective one-size-fits-all solution when, for example, science tells us that some children have a genetic or environmental predisposition placing them at greater risk of vaccine injury.

If they were primarily concerned with achieving good societal health, they would not play Russian roulette with our children.

The right to informed consent is one of the most fundamental ethics in medicine. It was codified in international law after Nazi experimentation with human subjects during World War II.

If public vaccine policy advocates had their way, you would not have the ability to exercise this right.

In many ways, you already do not have the ability to exercise this right, especially if you would like your child to attend public school.

But there are politicians who would like to further violate our rights. To them, the existing systems of coercion intended not to make our society healthier, but to achieve policy aims for its own sake, is not enough.

Whether you are a parent or a doctor, these politicians would have you be their obedient subjects.

Here is a quote illustrating how these kinds of people think:

“[G]ranting [Medical Exemptions] to legally required vaccines is not the practice of medicine but of a state authority to licensed physicians…. Essentially, physicians are fulfilling an administrative role….”

Think about what he is saying for a moment.

He is saying that the decision whether or not to vaccinate does not lay with you, the parent, in consultation with your child’s pediatrician.

He is saying that it’s not a decision to be made by the only parties with the specialized knowledge of the individual child necessary in order to be able to reasonably make it.

He is saying that the bureaucrats in Washington know better than you and your doctor what’s in the best interests of your child.

Now, tell me, do you think that bureaucrats in Washington know better than you and your child’s pediatrician how best to ensure your child’s health and well-being?

There is a war on right now over our right to informed consent.

If you appreciate my independent journalism on this critically important subject, please consider making a donation to help support my work. 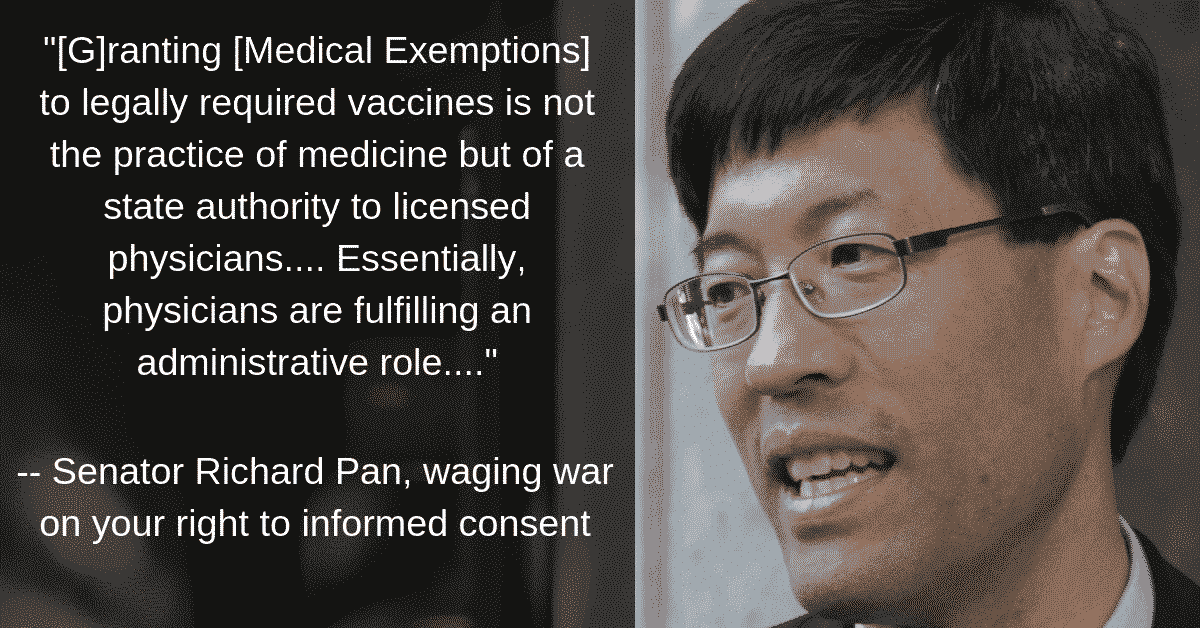