A Wanted Man in Burma

Antonio Graceffo is a wanted man. His crime? Supporting the Shan people in their rebellion against the ruling military junta in Burma, known euphemistically as the State Peace and Development Council (SPDC). A former successful Wall Street investment banker from Brooklyn turned travel and adventure writer, Antonio has authored numerous books, including about his adventures […] 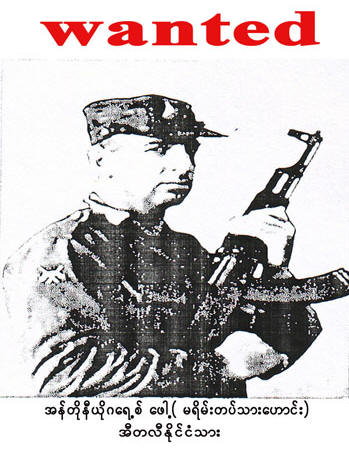 Antonio Graceffo is a wanted man. His crime? Supporting the Shan people in their rebellion against the ruling military junta in Burma, known euphemistically as the State Peace and Development Council (SPDC).

A former successful Wall Street investment banker from Brooklyn turned travel and adventure writer, Antonio has authored numerous books, including about his adventures bicycling around Taiwan, bicycling across the Taklamakan Desert in China, and his time studying with the monks at the famous Shaolin Temple. More recently, he has been involved trying to bring the world’s attention to the plight of the Burmese people suffering under the brutal reign of the SPDC.

Since outside journalists are banned from entering the country, Antonio crossed the border under the protection of the Shan State Army (SSA) and began reporting on conditions in the country, interviewing victims of the SPDC’s war against the people, writing about what he learned, and producing a series of videos featured on YouTube to bring awareness about the plight of the Shan.

Perhaps more well known than the SSA are another resistance group known as the Karen National Union (KNU), and its armed wing, the Karen National Liberation Army (KNLA), who were featured in the 2008 movie “Rambo”, starring Sylvester Stallone in the fourth installment in the film series.

But while Stallone played a fictional character, Antonio Graceffo, one could fairly say, is the real Rambo. An experienced martial artist featured on the Discovery Channel and in a number of martial arts films, Antonio was embedded with the Shan State Army and helped train Shan soldiers in the art of close-contact self-defense. Among Antonio’s videos on YouTube are several featuring him demonstrating martial arts techniques and sparring with SSA soldiers.

It is on a purported KNU website that an image of Antonio appears under a heading reading “wanted”, reminiscent of an old Western poster — except, of course, that Antonio is wearing the cap and uniform of the Shan State Army instead of a cowboy hat and leather vest, and holding a Kalashnikov rifle instead of a Winchester.

The website, MyanmarNargis.org, has a few telltale signs of being a false front operation–what is euphemistically known in the field as “counterintelligence”– headed up in fact by the SPDC. Perhaps not least among these signs is the name, “Myanmar”, which is the ruling regime’s name-change for the country that is otherwise known – particularly among opposition groups who do not recognize the regime – as Burma.

And the fact that a “wanted” poster for a man who has helped the rebels on a website of a rebel organization is also more than slightly counter-intuitive. Anti-junta groups Antonio remains in contact with confirmed to him that it is a disinformation site designed by the SPDC to create disunity and infighting among and within opposition groups.

“Fortunately,” says Antonio, “most people working on the Burma issue don’t trust anything written in Burmese. Each of the tribes has its own language and alphabet. Most of them are smart enough to use English on their websites to garner international support. The junta, it appears, is not that smart. But, since General Ne Win forcibly closed all of Burma’s universities, to prevent smart people from meeting and exchanging political ideas, it is no wonder that they are slipping intellectually.”

The text of the website page featuring the “wanted” poster, which requires the proper character encoding to be installed on one’s computer in order to read it, was translated for Antonio by a person he described as “an exiled Burmese intellectual, who had to flee Burma and seek asylum in another country. He hates the junta with a passion and supports the resistance groups.”

The exile noted along with his translation to Antonio, “the KNU has cleared your name and so we cannot sell you by the kilo to them.” (How very disappointing for those of us who know his whereabouts).

The page heading, under the “wanted” poster, reads “The Former Marine Who Would Combine Military Forces with Terrorists.” It describes the KNU, SSA and other resistance groups, as “armed terrorists” (perhaps–just maybe–another sign that the website is a counterintelligence front of the SPDC). It describes Antonio as “a former US Marine Italian race, American citizen”, and as being the head of a small group travelling within the country. It says Antonio’s group “is surely going to have to run and escape for their lives as they go through the Armed Forces’ Offensives” but that “it is more certain they will die violent deaths.”

Not very polite. Fortunately, Antonio is not actually in Burma currently — nor was he during the period of time last month the website alleges he was moving through the country with his “group” — a merry band, no doubt.

As much as the page seems designed to put people on the lookout for Antonio, it also seems intended to sow resentment among opposition leaders. Take, for instance, the insertion of this tidbit: “5th Brigade Commander Baw Kyaw Hair, on his part, was dissatisfied with how the present congress has appointed a central group in which General Tamlabaw’s sons and daughters have important posts in the KNU.”

Baw Kyaw Hair’s group “favors having a ceasefire with the present military government and exchange arms for peace”, the website says. (The exiled translator noted to Antonio that “this is an SPDC phrase for complete surrendering of one’s forces and one’s weapons to SPDC — very indicative of an SPDC author”.)

That author adds, “It is heard that 6th Brigade Commander Hsarmi is [also] dissatisfied with Tamlabaw’s circle of family and friends.”

The intent thus seems to try to poison relations among rebel groups as much as to threaten Mr. Graceffo — not that such a warning from the violent SPDC should be taken lightly.

While Antonio always manages to keep his sense of humor, despite the danger and despite the ugliness he has witnessed firsthand, the oppression in Burma under the military junta of the SPDC is no laughing matter. It’s high time the world took notice and took action. Antonio’s courageous work in defiance of the ruling regime has been intended to further that goal.

To close, in the words of Antonio, “please say a prayer for the people of Shan State.”