Jerusalem Is NOT ‘disputed’ Territory

It is a simple and uncontroversial point of fact that Israel has no legal claim to East Jerusalem, "occupied Palestinian territory" under international law.

Here’s the Washington Post on the Israeli occupation of Jerusalem, emphasis added:

Ever since the administration was blindsided by Israel’s March 9 announcement that it intends to build 1,600 housing units in a disputed area of Jerusalem, U.S. officials have pressed Israel to take actions to encourage Palestinians to attend indirect talks, including canceling the project, making concrete gestures such as a prisoner release and adding substantive rather than procedural issues to the agenda for talks. Some U.S. requests have not been made public. 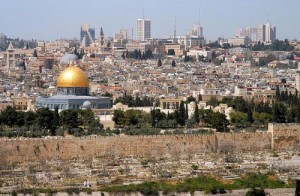 “Disputed”? This description implies that Israel and the Arabs both have some kind of legal claim over Jerusalem. But the fact of the matter is that Jerusalem is not by any means “disputed”. This is simply false. It is a simple and uncontroversial point of fact under international law that Israel has no legal claim to Jerusalem, that Jerusalem is rather undisputed Palestinian territory, and that Israel’s occupation of the city is illegal, in violation of both the Fourth Geneva Convention and numerous U.N. Security Council resolutions.

Israel today controls Jerusalem because it invaded and occupied the West Bank in 1967. Subsequently, the United Nations Security Council passed resolution 242, which emphasized “the inadmissibility of the acquisition of territory by war”, emphasized that member states have a commitment to abide by the U.N. Charter, and called for the “Withdrawal of Israeli armed forces from territories occupied” during the June 1967 war.

In May 1968, the Security Council passed resolution 252, which declared Israel’s annexation of Jerusalem “invalid” and called upon Israel “to rescind all such measures already taken and to desist forthwith from taking any further action which tends to change the status of Jerusalem”.

In July 1969, the Security Council passed resolution 267, noting that Israel had since “taken further measures tending to change the status of the City of Jerusalem”. It reaffirmed “the established principle that acquisition of territory by military conquest is inadmissible” and deplored Israel’s further violations of U.N. resolutions, censured “in the strongest terms all measures taken to change the status of the City of Jerusalem”, and confirmed “that all legislative and administrative measures and actions taken by Israel which purport to alter the status of Jerusalem, including expropriation of land and properties thereon, are invalid and cannot change that status”, and urgently called on Israel to rescind the measures taken to annex Jerusalem.

Security Council 271 of September 1969 again reaffirmed the principle of the inadmissibility under international law of the acquisition of territory by war, describing Jerusalem as being under “military occupation” by Israel and condemning Israel’s continued violation of previous resolutions.

Resolution 452 of July 1979 again deplored Israel’s continued violation of Security Council resolutions and again emphasized that Israel’s annexation of Jerusalem “has no legal validity and constitutes a violation of the Fourth Geneva Convention”. It again also noted that Jerusalem is included in “the occupied Arab territories”.

Resolution 476 of June 1980 again deplored Israel’s continued violation of international law and reaffirmed “the overriding necessity to end the prolonged occupation of Arab territories occupied by Israel since 1967, including Jerusalem”, and reaffirmed Israel’s annexation measures “have no legal validity and constitute a flagrant violation of the Fourth Geneva Convention” and were “null and void”.

Resolution 478 of August 1980 again censured Israel’s continued violation of international law and again reaffirmed that its annexation attempts were “null and void”.

In July 2004, the International Court of Justice issued an advisory opinion on the legal consequences of Israel’s decision to build a wall in the West Bank, including Jerusalem, which concluded that “all these territories (including East Jerusalem) remain occupied territories and that Israel has continued to have the status of occupying Power”, that the construction of the wall in those territories is “illegal”, and that Israel’s settlements in the West Bank, including Jerusalem, similarly “have been established in breach of international law.”

So what, exactly, is it the Washington Post would have its readers believe there is a “dispute” over? There is absolutely no dispute whatsoever, and it remains an uncontroversial point of fact under international law that Jerusalem is occupied Arab territory from which Israel must withdraw.

The closest the Post comes to acknowledging this fact, in this particular example, is (emphasis added):

Reports from Israel differed on the significance of the new approval, and U.S. officials said they were seeking “clarification” from the Israeli government. Netanyahu has defended Israel’s right to build in East Jerusalem, which Israel annexed in 1967 in an act not recognized internationally, but the Obama administration has urged him to ensure that housing projects there do not spoil the atmosphere for talks.

See, the description of Jerusalem as “disputed” could perhaps be sustainable so long as Israel’s annexation is “not recognized internationally”, which is no doubt why the Post declines to impart upon its readers the fact that — far from merely not being recognized — there is an international consensus that Jerusalem is occupied Arab land.

Were the Post and the rest of the mainstream media to actually disclose such facts to its readers, it could no longer use such descriptions as “disputed” to describe land illegally occupied by Israel. And that would just cause problems for U.S. policy, so it’s best just to stick to the formula and not rock the boat with things like facts and principled adherence honesty and accuracy in reporting.