The Framework for Debate on Iran

Once again, I find myself mostly in agreement with Marc Lynch, who argues against launching a military attack on Iran at Foreign Policy. I agree pretty much with all of his conclusions. But that’s not what I’m inspired to comment on at the moment. Rather, I’d like to make an observation about the nature of […] 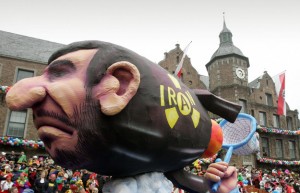 Once again, I find myself mostly in agreement with Marc Lynch, who argues against launching a military attack on Iran at Foreign Policy. I agree pretty much with all of his conclusions. But that’s not what I’m inspired to comment on at the moment. Rather, I’d like to make an observation about the nature of the framework for debate on the Iran issue.

Lynch’s article serves to illustrate the point well. He outlines, accurately, the arguments both for and against bombing Iran:

[W]e must bomb Iran because there are no other policy options which guarantee success; the risks of an attack are exaggerated; the benefits of an attack are great; and Iranians and Arabs secretly want us to do it. Nor have the rebuttals changed: other policy options are available, which at least slow down Iran’s progress towards a nuclear weapon even if they do not provide the kind of epistemic certainty which hawks crave; the risks of an attack are many and real; the benefits of an attack are likely to be less than advertised; and it is exceedingly doubtful that Arabs or Iranians will in fact rally to support an Israeli or American attack. These arguments are now as familiar as wallpaper, from the arguments over Iraq from the 1990s-2003 through the long years of arguments about Iran.

What’s instructive about this is not what factors the arguments include in the equation, but which ones are excluded. To name one obvious one, there is the fact that there isn’t any solid evidence that Iran actually has a nuclear weapons program. It’s an unquestionable axiom that Iran is actively attempting to build a nuclear bomb. This needn’t be proven; it’s an article of faith. One needn’t bother oneself with unimportant things like evidence.

What? Learn something from the lesson of Iraq?! Never!

Another one that jumps immediately to mind is the fact that such an attack would be illegal, a clear violation of the U.N. Charter, Iran’s right to a civilian nuclear program under the nuclear-non-proliferation treaty (NPT), and other relevant texts of international law forbidding the use of force in international relations — or threats to use force, for that matter. Notice the legality of such an attack is completely irrelevant. It’s just not a factor worth considering.

That the conditions of jus ad bellum are met in the case of any attack on Iran is an inherent assumption in the standard framework — which Lynch accurately summarizes. It’s also worth noting that his point here is not that this framework is  insufficient or faulty; merely that it is “as familiar as wallpaper” — no doubt also correct.

One could also take into account moral considerations, in addition to pragmatic and legal ones. It’s possible that there is room for such considerations in the standard framework. One could perhaps take potential civilian casualties into account under “the risks of an attack”, alongside more practical considerations of potential consequences like disruption of the Gulf oil supply, sparking a larger regional conflict harmful to U.S. interests as defined by the political and economic elite, getting most of the world pissed off at us, etc.

Or not. Whichever. It’s not all that important.

Just an observation. Carry on.