Foreign Policy Journal — The U.S. Senate on April 14 passed a resolution “calling on the United Nations to rescind the Goldstone report”, the popular name for the report of a U.N. fact-finding mission chaired by Richard Goldstone that was charged with investigating Israel’s full-scale military assault on the Gaza Strip in 2008-09, code-named […] 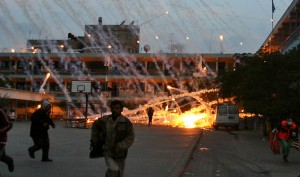 Foreign Policy Journal — The U.S. Senate on April 14 passed a resolution “calling on the United Nations to rescind the Goldstone report”, the popular name for the report of a U.N. fact-finding mission chaired by Richard Goldstone that was charged with investigating Israel’s full-scale military assault on the Gaza Strip in 2008-09, code-named “Operation Cast Lead”.

The report of the fact-finding mission concluded that there was evidence that both Israel and the Palestinian authority in Gaza, Hamas, committed war crimes during the course of the assault.

S.RES.138 states that “Justice Richard Goldstone publicly retracted the central claims of the report he authored in an op-ed in The Washington Post on April 2, 2011” and “also conceded that the number of civilian casualties was far smaller than the report alleged”.

On this basis, the resolution calls upon the U.N. to “rescind the report”, and “requests [U.N.] Secretary-General Ban Ki Moon to do all in his power to redress the damage to Israel’s reputation caused by the Goldstone report” and “urge member states to prevent any further United Nations action on the report’s findings”.

A similar resolution in the House of Representatives was introduced on April 15 and referred to the House Committee on Foreign Affairs.

In his Washington Post op-ed, Goldstone wrote that a further U.N. report that “followed up on the recommendations of the Goldstone Report” had recognized Israeli investigations into its own conduct, the findings of which “indicated that civilians were not intentionally targeted as a matter of policy.”

The Senate resolution states that these remarks from Goldstone constitute a retraction of “the central claims” of the Goldstone Report.

But another of the four leading authors of the report of the U.N. fact-finding mission, Hina Jilani, pointed out to the Middle East Monitor that the findings of the follow-up committee did not alter or contradict the earlier report’s conclusions.

In response to Goldstone’s op-ed, U.N. Human Rights Council spokesman Cedric Sapey observed that an op-ed in a newspaper does not constitute an official retraction from the U.N., and for the report to be withdrawn, Goldstone would need to submit a formal request to do so—something he told the Associated Press he had no intention of doing.

Also on April 14, the same day the Senate resolution was passed, the three other principle authors of the so-called “Goldstone report”, Hina Jilani, Christine Chinkin, and Desmond Travers, issued a statement saying that “some articles and comments appearing in the press” had “misrepresented facts in an attempt to delegitimize the findings of this report and to cast doubts on its credibility”, making it ” “necessary to dispel any impression that subsequent developments have rendered any part of the mission’s report unsubstantiated, erroneous or innacurate.”

The joint statement said that the report of the fact-finding mission “contains the conclusions made after diligent, independent and objective consideration of the information related to the events within our mandate, and careful assessment of its reliability and credibility. We firmly stand by these conclusions.”

Following upon the recommendations of the Goldstone report, a committee of independent experts was appointed “to monitor the independence, effectiveness and genuineness of any domestic proceedings carried out to investigate crimes and violations of international law pointed out in the mission’s report.”

Yet, the statement continues, claims that the follow-up report “somehow contradicts the fact-finding mission’s report or invalidates it … are completely misplaced, and a clear distortion of their findings.”

The actual findings of the report of the committee of independent experts stands in stark contrast to what is being portrayed in the media as contradicting the findings of the Goldstone report.

In once case where Israeli soldiers had shot and killed two boys and wounded a third, Israel found that its soldiers had “acted lawfully in light of a perceived threat” despite discrepancies in their testimonies.

In another case where civilians had been ordered to a location that was then bombed by Israel and then ambulances prevented from entering the area to help the victims, Israel’s self-investigation “did not conclude that there had been anything out of the ordinary in the strike” on a civilian home.

The committee had no information from Israel on any investigations into a number of other incidents cited in the Goldstone report, including attacks on hospitals.

The use of Palestinian civilians as human shields, the committee’s report points out, has been acknowledged by Israel, which “demoted” two soldiers who also “received suspended sentences of three months each.”

The report comments upon this by saying that “it is hard to square the apparent finding that the soldiers ‘did not seek to degrade or humiliate the boy'” in the case where a conviction occurred “with evidence that they intended to put him directly in harm’s way at grave risk to his life.”

The only other conviction that has occurred in Israel for conduct during its assault on Gaza was “the case of a soldier who was sentenced to a prison term of seven and a half months for stealing a credit card”.

The report contrasts the two cases resulting in sentences by nothing that this “harsher penalty was imposed for acts that did not entail danger to the life or physical integrity of a civilian, much less to a nine year old child.”

The committee’s report “reiterates the conclusion of its previous report that there is no indication that Israel has opened investigations into the actions of those who designed, planned, ordered and oversaw Operation Cast Lead.”

“In other words,” Goldstone’s co-authors wrote in their statement, published in the London Guardian, “one of the most serious allegations about the conduct of Israel’s military operations remains completely unaddressed.”

“We consider that calls to reconsider or even retract the report, as well as attempts at misrepresenting its nature and purpose,” the statement reads, “disregard the right of victims, Palestinian and Israeli, to truth and justice.”