Ah, Thomas Friedman. You gotta love him. Here he is on December 20, 2011: With the withdrawal of the last U.S. troops from Iraq, we’re finally going to get the answer to the core question about that country: Was Iraq the way Iraq was because Saddam was the way Saddam was, or was Saddam the […] 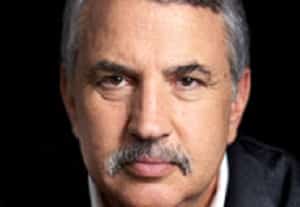 Iraq was always a war of choice. As I never bought the argument that Saddam had nukes that had to be taken out, the decision to go to war stemmed, for me, from a different choice: Could we collaborate with the people of Iraq to change the political trajectory of this pivotal state in the heart of the Arab world and help tilt it and the region onto a democratizing track?

Whoa. Notice the high bar he sets for himself there: “I never bought the argument that Saddam had nukes that had to be taken out…” That’s funny, because the (false) claim at the time wasn’t that Iraq had nukes, but that it was trying to obtain them.

There is no avoiding nation-building in Iraq. Because to get at Iraq’s weapons of mass destruction we’ll need to break the regime open, like a walnut, and then rebuild it.

Doh! Seems good ol’ Tom Friedman pathetically bought into the transparent lies that Iraq had WMD after all. No wonder he had to set the bar for himself so high all these years later.

How is it possible that anyone actually takes this clown seriously? Wonders never cease. This guy winning the Pulitzer is like Henry Kissinger winning the Nobel Peace Prize.