Hey, Europe! You can’t compete with America’s capacity for violence! Suck on it!

USA! USA! USA! America is the most powerful and efficient killing machine on the planet, yeah! Suck on that, Europe! Losers!

The New York Times editorializes on NATO’s intervention in Libya: “NATO can be proud of the role it played in violating international law to overthrow the government of Libya regardless of the resulting escalation of violence and risk to civilians.”

Okay, the Times didn’t really say that, except the part about how “NATO can be proud”. The purpose of the editorial is to boast about how wonderful the U.S. is, and how (despite Obama’s meaningless assertions that the U.S. was taking a back seat in a supporting role) the U.S. was really leading the military intervention. “Europe is still not ready for prime time”, the Times gleefully chides, ever so proud of America’s enormous capacity to inflict violence.

Of course, during the NATO bombing of Libya, the Times was all to happy to parrot the official line that the U.S. was merely in a supporting role. But now the charade may be dropped and we may complain about how the European militaries are “free-riding” on “Washington and the American taxpayer”, and how our “patience is running out”. “Europeans need to spend more on their militaries and spend it more rationally”, the Times lectures, so that European nations will not need to rely so much on the U.S. to do most of the heavy bombing and killing.

USA! USA! USA! America is the most powerful and efficient killing machine on the planet, yeah! Suck on that, Europe! Losers!

Say, here’s a thought: What if instead of investing more money in violence and death, the U.S. and other NATO members let their taxpayers keep those dollars and euros so that instead of going towards bloodshed they could go towards rebuilding their economies, reducing poverty, advancing health care, providing food and clean drinking water to those who lack it, trading with rather than bombing nations, etc.? What if we invested in peace instead of war?

Okay, now back to our regularly scheduled programming. 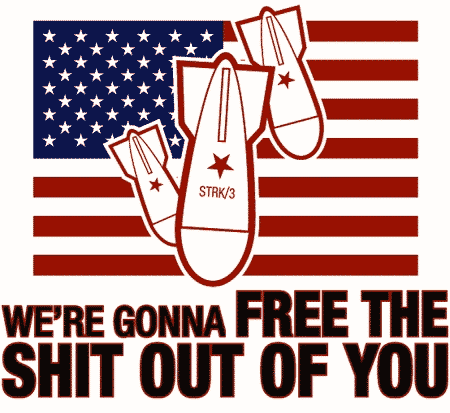