Paul Krugman on BBC Newsnight debates with MP Andrea Leadsom and Better Capital LLP Chairman Jon Moulton about the U.K.’s “austerity”, which, Krugman argues, is hurting Britain and all of Europe.

Paul Krugman on BBC Newsnight debates with MP Andrea Leadsom and Better Capital LLP Chairman Jon Moulton about the U.K.’s “austerity”, which, Krugman argues, is hurting Britain and all of Europe. What countries need to be doing, he argues, is spending more by borrowing more. 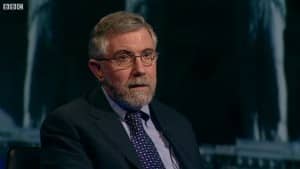 Pay close attention to how Krugman’s argument degenerates into an ad hominem attack on Moulton and Leadsom; they aren’t honest, they aren’t sincere, they do not care about fiscal responsibility, he says. They only care about irresponsibly advancing their own ideological viewpoint of a smaller state; unlike Krugman, who would never act irresponsibly—such as by advocating that the Fed create a housing bubble, which would later burst and lead to the unemployment he now wants to address by generating more debt—in order to advance his own ideological desire for a bigger state. The fact that he feels it necessary to resort to fallacies like personal attacks on the character of his interlocutors says everything.

As for his non-ad hominem arguments, where to begin?

First of all, what “austerity”? Spending in the UK has only increased since the crisis hit in ‘08. I want to know how Krugman defines “austerity” when he can claim it exists even as spending goes up.

Secondly, even if we were to stipulate that there has been “austerity” in Europe, there certainly hasn’t been in the U.S., which has rather followed Krugman’s prescription of increasing spending, fiscal “stimulus”, and running the printing presses. He claims the lack of a recovery in Europe “proves” that “austerity” makes things worse; but, then, paradoxically, by the same logic, doesn’t the U.S. case then also “prove” that Krugman’s prescription doesn’t work? Obviously, Krugman’s simplistic argument breaks down.

Of course, he would respond that the “stimulus” just hasn’t been big enough, the spending just hasn’t increased enough—the same way he criticized the Fed during the recession following the bursting of the dot-com bubble for not lowering interest rates far enough to stimulate spending in the housing sector.

Thirdly, notice how he agrees that more spending today means burdening the next generation with more debt—he just doesn’t care. This is a “venial sin”, as he puts it, that we may be forgiven for. What is unforgivable is today’s unemployment. He’s only concerned with getting jobs to people today (never mind they’ll have to work harder to shoulder their debt burden tomorrow). But why is unemployment so high? Well, it’s because the Fed followed Krugman’s prescription of artificially low interest rates and inflated the housing bubble that precipitated the financial crisis. Now he wants to treat the symptoms of his own disease with more of the same that caused the disease.

And how does he want to create new jobs? By having the government create them. So what does that mean? More TSA agents? A larger IRS bureaucracy? He is never specific about what jobs he wants the government to create. This is because he doesn’t care, because in his view, even useless spending grows the economy. In that case, why doesn’t the government borrow a trillion dollars, pay $500 billion to one group of people to go around digging up holes and the rest to another group of people to go around filling them in? Look at all the jobs that would create!

And what does he identify as the problem? People aren’t spending because there is a lack of demand. So the government should artificially create demand with “stimulus”—the way he advocated that the Fed’s monetary policy should be such as to create a boom in housing, which policy along with the government policy of encouraging homeownership did indeed create artificial demand in the housing sector following the collapse of the dot-com bubble, thereby inflating the housing bubble and leading us to the crisis we are in now.

Government bureaucrats emphatically do not know better than the market how to most efficiently direct scarce resources into the most productive uses.

Fourthly, the argument that growth comes from spending is itself a fallacy. It does not, and this DEBT = ECONOMIC GROWTH argument in particular belongs with Orwell’s FREEDOM = SLAVERY. Economic growth comes from saving, from deferring consumption so as to create capital to invest in means to increase production and thereby raise society’s standard of living.

Should we really be taking advice from the guy who advocated that the Fed create a housing bubble to replace the dot-com bubble, which it did, precipitating the very situation we now find ourselves in? Are the people who are responsible for creating this mess really the folks we should trust to get us out?

This is not wisdom.