That Krugman feels it necessary to resort to such logical fallacies as strawman and ad hominem argumentation while accusing others of dishonesty illustrates how he is incapable of producing any kind of actual reasonable and factual argument and also speaks volumes about what an extraordinary hypocrite he is. 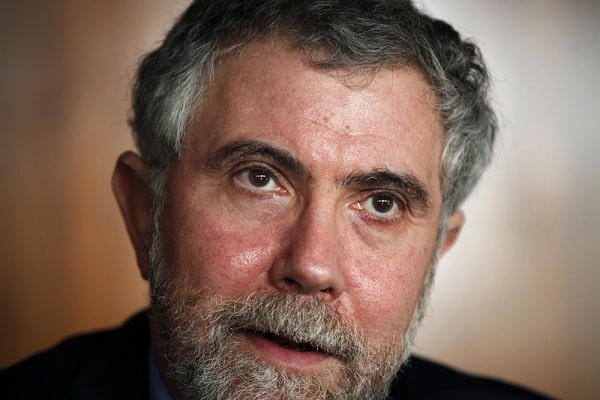 Paul Krugman’s column this week is on the Supreme Court’s upholding of the individual mandate of the Affordable Health Care Act, a.k.a., Obamacare, under which the government forces every American under threat of penalty to purchase health insurance. He doesn’t offer much in the way of facts about what this law is or what it actually does, beyond celebrating the fact that it means more people—30 million more, to be precise (or as precise as the Congressional Budget Office’s estimate)—will now be insured.

Well, obviously, more people will be insured after the law takes effect than before it. If the government passed a law forcing people under threat of punishment to purchase garden gnomes, then, yeah, one consequence would be that more people own garden gnomes. (Feel free to replace “garden gnomes” with whatever you please in that syllogism.) But, one, is that the only consequence of the law, and, two, is that necessarily a good thing?

Krugman assumes that it his readers will just recognize that it is plainly obvious why having 30 million more Americans insured by forcing them to buy insurance against their will is a good thing. It’s so simple, does it really require any explanation? Everybody knows that with health care costs so high these days, if you don’t have insurance, you are pretty much just screwed. And everybody knows that some people can’t afford insurance because premiums are so high. And then there are others who can’t afford health care but can afford insurance and choose not to get it anyways. And obviously one of the reason premiums are so high is because health care providers don’t turn away people who need care just because they are too poor to be able to pay for it themselves and also don’t have insurance, but rather take care of these people anyway, and then pass those costs on to others who can afford to pay for the care themselves and/or for insurance. So, before Obamacare, the problem was that people who could afford health insurance were really just subsidizing people who are a burden on society by virtue either of being poor or selfish. Now, that is unfair socialism or something, so we can’t have that.

So it just goes without saying that the solution to the problem of wealthier people subsidizing people who are a burden on society by virtue either of being poor or selfish is to just force everybody to buy insurance. Of course, you can’t force poor people to buy something they still can’t afford, so there are exemptions for them in the law. So they still won’t be covered. They will continue to get care, and the costs will continue to be passed on to wealthier individuals, so nothing much will change there. Those freeloaders, on the other hand, are not exempt and will have to purchase insurance or pay the penalty. So they will no longer be able to get free care by passing their costs onto others who do buy insurance.

Of course, many of these people who choose not to buy insurance do so because they are young and/or because they choose to live a healthy lifestyle and thus don’t suffer from chronic medical conditions requiring expensive care as do others who choose to live unhealthy lifestyles. So under Obamacare, effective subsidization of one group of people by another still exists, it just shifts around a bit. So now people who eat right and exercise and would, under their own free will, choose not to buy insurance will be forced to subsidize the medical care for their fat, lazy neighbors who smoke two packs a day. This is not to say that everyone who requires health care does so as a consequence of their own lifestyle choices, but such choices are certainly a major factor in the rising costs of healthcare, a fact the Supreme Court points out in its ruling.

In fact, the whole reason the mandate is supposed to keep insurance premiums from rising is due to the fact that it will require people who don’t require lots of medical care to pay more into an insurance policy than they will get out of it so that those people who do require lots of medical care won’t have to have their premiums increased. This is an uncontroversial observation. This fact is explicitly noted in the Supreme Court’s ruling, which states that “the mandate forces into the insurance risk pool more healthy individuals, whose premiums on average will be higher than their health care expenses.”

So, in other words, the government’s solution to the problem of rising premiums for people who buy insurance is to force healthy individuals who don’t require health care to subsidize the costs of insurance for others who do require it. So all the mandate really does is replace one kind of subsidization with another.

That means that Obamacare actually creates the very problem it is ostensibly designed to solve.

The point bears repeating, but don’t take it from me. Here’s the Supreme Court (emphasis added):

In the Affordable Care Act, Congress addressed the problem of those who cannot obtain insurance coverage because of preexisting conditions or other health issues. It did so through the Act’s “guaranteed-issue” and “community-rating” provisions. These provisions together prohibit insurance companies from denying coverage to those with such conditions or charging unhealthy individuals higher premiums than healthy individuals….

The guaranteed-issue and community-rating reforms do not, however, address the issue of healthy individuals who choose not to purchase insurance to cover potential health care needs. In fact, the reforms sharply exacerbate that problem, by providing an incentive for individuals to delay purchasing health insurance until they become sick, relying on the promise of guaranteed and affordable coverage. The reforms also threaten to impose massive new costs on insurers, who are required to accept unhealthy individuals but prohibited from charging them rates necessary to pay for their coverage. This will lead insurers to significantly increase premiums on everyone….

The individual mandate was Congress’s solution to these problems.

In other words, the recognized predictable effect of Obamacare’s increased regulations for the insurance industry would be to actually to increase the costs of buying insurance—the very opposite consequence we are told these regulations are designed to produce, and the Congress’s solution to the problem their own regulations exacerbated is to force people to buy insurance who otherwise would choose not to because their premiums would be higher than their expected health care costs, thus effectively replacing the problem of subsidization of health care costs of lower-income uninsured people by higher-income insured people with the subsidization of health care costs of unhealthy people by healthy individuals.

Once again, these facts are explicitly acknowledged in the Supreme Court’s judgment.

But never mind any of these facts. The “real winners” from Obamacare “are ordinary Americans—people like you”, Krugman declares, without elaborating, beyond pointing out the already self-evident fact that it will mean more people will be insured than otherwise would have been.

Declining to provide any discussion of the actual facts of the law, Krugman chooses instead to begin with the assumption that the law is a good thing, and his only argument is that if anyone doesn’t recognize this axiomatic truth, that this law is good and just and wise, then they must just be a complete sociopathic asshole who just doesn’t care about other people.

He asserts without bothering to present an argument or any facts to support his view that “all of use stand to benefit” from Obamcare, which will make “America a kinder and more decent society.”

“[T]he law that the Supreme Court upheld is an act of human decency”, Krugman declares. This is simply axiomatic, so self-evident as to require no argument or elaboration of facts.

“[T]he most striking thing about the campaign against reform”, Krugman continues, “was its dishonesty.” Notice how Krugman frames this. If you oppose Obamacare, then you ipso facto oppose reform. This is, of course, a nonsense strawman argument (one of Krugman’s favorite rhetorical devices). What opponent of Obamacare would argue that the health care system in the U.S. is just fine the way it is, thank you very much? This is idiotic nonsense.

Continuing with his personal attacks on anyone who disagrees with his view, Krugman thunders that “what was and is really striking about the anti-reformers”—that is, translated from Krugman-speak, people who want health care reform but just oppose the specific reforms of Obamacare—“is their cruelty.”

Notice again how Krugman creates a strawman argument (opponents of Obamacare are against reform of any kind), projects this strawman upon anyone and everyone who disagrees with him, and then from that foundation engages in ad hominem attacks, arguing that anyone who doesn’t support the reforms of Obamacare is dishonest and cruel, someone who lacks human decency, who just cares nothing for other human beings.

In effect, Krugman’s argument boils down to attributing outright sociopathy to anyone and everyone who doesn’t share his view.

Never mind any of the actual facts about Obamacare, the munificence of which we may simply assume purely as a matter of faith.

That Krugman feels it necessary to resort to such logical fallacies as strawman and ad hominem argumentation while accusing others of dishonesty illustrates how he is incapable of producing any kind of actual reasonable and factual argument and also speaks volumes about what an extraordinary hypocrite he is.