The ludicrous claims that Iraq shipped WMD to Syria in 2003 are unlikely to rest until people like Harvey Morris get a clue and stop trying to repeat claims for which there is not only absolutely no evidence, but for which all evidence shows to be false. 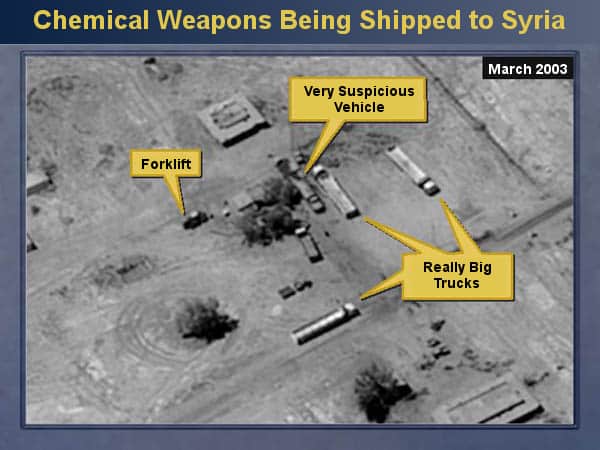 The existence of undeclared Iraqi W.M.Ds was President George W. Bush’s casus belli in 2003. The failure to find them following the collapse of the Saddam Hussein regime led to the conclusion that the U.S. and its British allies had cherry-picked and massaged intelligence reports of alleged hidden weapons in order to justify the war.

Whoah. Hold on right there. Let’s set the record straight.

Second of all, this isn’t a conclusion drawn only after WMD weren’t found following the invasion, it was perfectly obvious to anyone paying the slightest bit of attention before the war even began. I, for one, got started with my writing that ultimately led to me creating Foreign Policy Journal and this site by sending emails home to friends and family and pretty much everyone in my address book and pointing out to them the many lies that were being told to start a war (which emails were not well received, but oh well, I happened to have been right, even if nobody would listen).

Now that we’ve set the record straight on those counts, let’s continue. Morris next comments:

Claims of a secret transfer to Syria of chemical and other weapons have, broadly speaking, been embraced by those who supported the 2003 invasion and dismissed by those who opposed it.

Morris, of course, has precisely zero evidence to support his suggestion that perhaps Iraqi WMDs were sent to Syria. Here’s the best he can do:

My own evidence, for what it is worth, is purely anecdotal. As I drove east from Damascus in mid-March 2003 to cross the border into Iraq, my Iraqi Kurdish companion said he had spoken to Kurdish truck drivers who regularly used the road.

They reported an unusual build-up of traffic out of Iraq in previous days. Closed convoys of unmarked trucks, which other drivers were forbidden from approaching or overtaking, had been streaming across the border into Syria.

He’s being serious, by the way. His post is not a joke, although I would myself definitely be suspicious if it had been posted on April 1.

Further on, towards the end, Morris does his readers the service of noting:

A post-war report by the Iraq Survey Group concluded that stockpiles of Iraq’s weapons of mass destruction were destroyed after the 1991 Gulf War and that by 2003 the Saddam Hussein regime had not fulfilled its eventual intention to resume secret production.

Yep. The CIA eventually was forced to admit what a few of us were saying before the war, that there was no evidence that Iraq still had any WMDs, but that all evidence suggested it had been completely disarmed by UNSCOM (the first U.N. inspections regime, the later one being UNMOVIC), which also found evidence of unilateral destruction dating to ’91.

Bottom line: the CIA concluded after its own search and investigation that at the time of the 2003 invasion, Iraq had no WMD. Let that sink in for just a moment. Iraq had no WMD. Okay, let’s continue. Morris next adds:

An addendum to the report by its author, Charles Duelfer, the C.I.A’s senior weapons inspector, reached no firm conclusions about whether W.M.D-related material was shipped out of Iraq before the invasion.

Okay, pause. Now, let’s think about that. The Duelfer Report reached a very firm conclusion that Iraq had been completely disarmed of its WMDs by the early to mid- ‘90s. So how is it possible to have reached that firm conclusion and yet at the same time to have “reached no firm conclusions” about whether WMD was shipped to Syria just prior to the invasion? Obviously, this is a logical impossibility. If Iraq had no WMD, then it couldn’t possibly have shipped any WMD to Syria.

Ah, but notice the careful wording Morris used: “W.M.D.-related material” (emphasis added). Well, what does that mean? Morris quotes from the addendum to to Duelfer Report:

“It was unlikely that an official transfer of W.M.D. material from Iraq to Syria took place,” the addendum said. “However, ISG [the Iraq Survey Group] was unable to rule out unofficial movement of limited W.M.D-related materials.”

Let’s look a bit further at what the addendum stated:

ISG was unable to complete its investigation and is unable to rule out the possibility that WMD was evacuated to Syria before the war.

Pause for translation: There is absolutely no evidence that WMD was evacuated to Syria, but, hey, anything is theoretically possible. Continuing:

It should be noted that no information from debrieﬁng of Iraqis in custody supports this possibility. ISG found no senior policy, program, or intelligence ofﬁcials who admitted any direct knowledge of such movement of WMD. Indeed, they uniformly denied any knowledge of residual WMD that could have been secreted to Syria.

But, hey, remember, anything is theoretically possible.

Nevertheless, given the insular and compartmented nature of the Regime, ISG analysts believed there was enough evidence to merit further investigation.

What “evidence” merited further investigation? Not the slightest bit of it has ever been presented.

It is worth noting that even if ISG had been able to fully examine all the leads it possessed, it is unlikely that conclusive information would have been found.

Translation: It is theoretically possible such a transfer of WMD occurred, even though there isn’t the slightest bit of evidence for it and even if we had completely exhausted our resources in our investigation, we probably wouldn’t have been able to find any.

At best, barring discovery of original documentary evidence of the transfer, reports or sources may have been substantiated or negated, but ﬁrm conclusions on actual WMD movements may not be possible.

Translation: There are absolutely no documentary evidence, reports, or sources that evidence any such transfer, but we cannot conclude with certainty that no such transfers occurred, because, hey, anything is theoretically possible. We then come to the paragraph quoted by Morris (who in turn was citing an AP report, not the actual addendum, which he apparently couldn’t trouble himself to Google):

Based on the evidence available at present, ISG judged that it was unlikely that an ofﬁcial transfer of WMD material from Iraq to Syria took place. However, ISG was unable to rule out unofﬁcial movement of limited WMD-related materials.

Translation: Yeah, okay, you get the idea. Morris closes with:

The debate is likely to rest there until the departure of President Bashar al-Assad’s regime. When, or if, he goes, outsiders might at last be able to examine his arsenal and finally resolve a mystery of the 2003 war.

Well, everybody loves solving a good mystery, so let’s get this regime-change business going!

The ludicrous claims that Iraq shipped WMD to Syria in 2003 are unlikely to rest until people like Harvey Morris get a clue and stop  trying to repeat claims for which there is not only absolutely no evidence, but for which all evidence shows to be false.