On Krugman, Kicking the Can Down the Road, and Ireland’s ‘Austerity’

Paul Krugman writes that "eventually" the U.S. will need "to rein in the growth of U.S. government debt", but that for now, "it would be irresponsible and destructive not to kick that can down the road"

Paul Krugman writes that “eventually” the U.S. will need “to rein in the growth of U.S. government debt”, but that for now, “it would be irresponsible and destructive not to kick that can down the road” because cutting government spending “destroys jobs and causes the economy to shrink”, as proven by “the severe and continuing slump in Ireland”, which has implemented “fiscal austerity”.

Yeah, about that. Krugman has frequently pointed to Ireland as an example of how “austerity” is bad for the economy. Last April, for example, in response to one of his columns, I wrote:

So let’s look at Ireland, for example, which Krugman argues that “austerity” has failed. What is the situation there? Well,Reuters tells me that Ireland’s debt is actually poised to increase in terms of its debt to GDP ratio, peaking next year at over 120% of its GDP. Is that “austerity”? The Wall Street Journal tells me that Ireland ran a deficit of 9.4% of GDP in 2011 and under the terms of its IMF bailout must reduce that to 8.6% this year. How is either figure “austerity”? Wouldn’t having “austerity” meannot running a deficit? Wouldn’t it mean not spending over €70 billion when revenue is at €57 billion, with spending “projected to be little changed” through 2015? Wouldn’t it by definition mean not continuing to struggle to “to rein in runaway debts”? Wouldn’t “austerity” rather entail having a balanced budget and paying down of debt, rather than a deficit and more debt? Gosh, maybe it’s the outrageous government spending that’s the problem! Did that possibility ever cross Krugman’s mind? Did the possibility that you can’t solve a “debt crisis” by spending more ever get fired across any synapses in his brain? 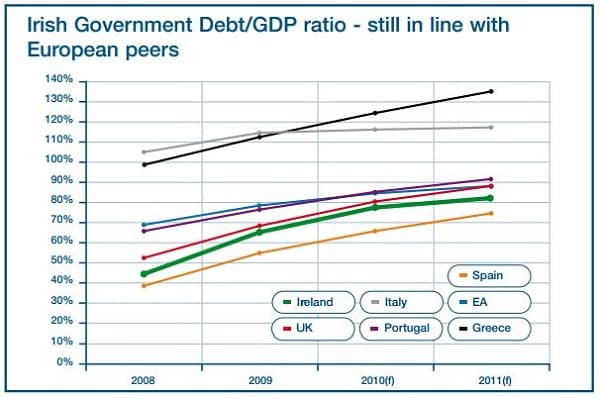 Here’s a graph of what Ireland’s spending has looked like (the blue line):

And I found the numbers and made my own charts of Ireland’s government expenditures: 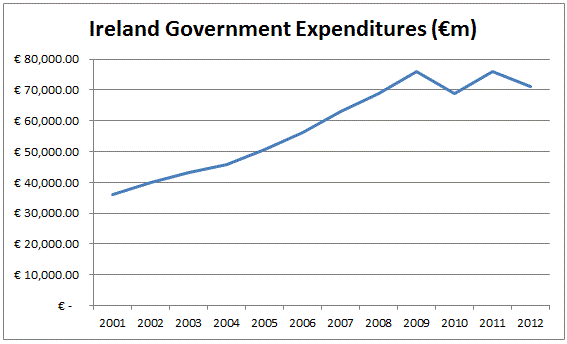 And again, as a percentage of GNP: 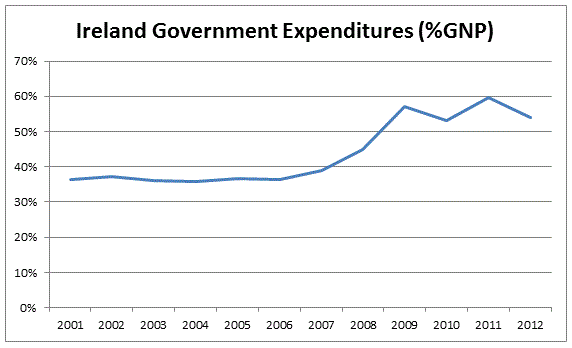 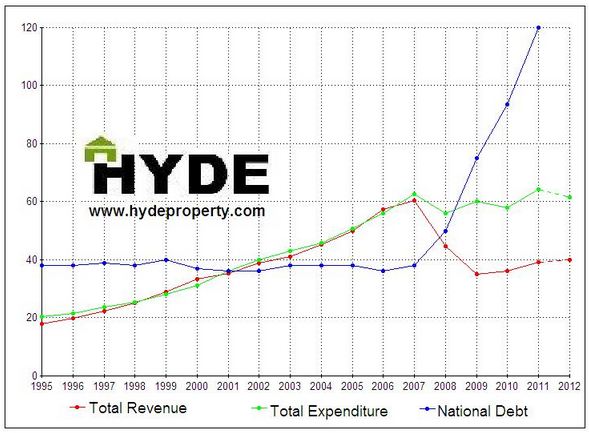 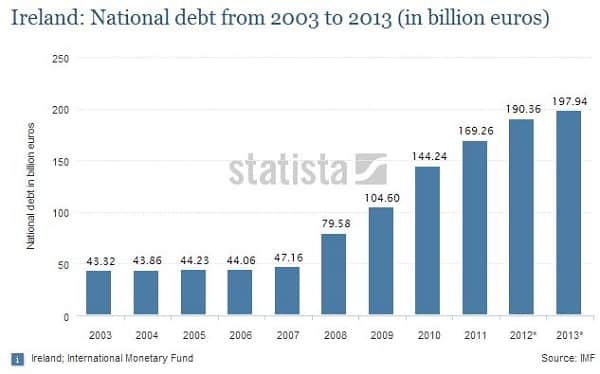 This is what Krugman calls “austerity”. So it isn’t Ireland’s profligate spending and ever increasing debt that is the problem, but it’s policy of “austerity”. Clearly.

Krugman doesn’t only point to Ireland, of course, as an example of how “austerity” is bad for the economy. I’ve posted before about his intellectual dishonesty in this regard (click to see the graphs I posted there). And it isn’t only Krugman, but the New York Times in general hammering on this theme and effectively calling for the U.S. to do what Greece has done without even realizing it.