Ludwig von Mises and Friedrich Hayek, luminaries of the Austrian school of economics

In yet another vain attempt to discredit Austrian economics, Paul Krugman tries in a recent blog post to attribute to the Austrian school an irreconcilable self-contradiction. 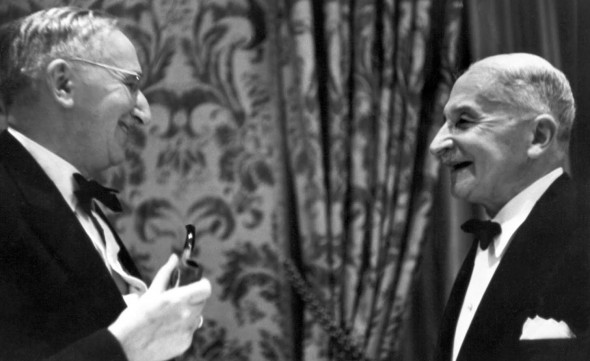 Ludwig von Mises and Friedrich Hayek, luminaries of the Austrian school of economics

In yet another vain attempt to discredit Austrian economics, Paul Krugman tries in a recent blog post to attribute to the Austrian school an irreconcilable self-contradiction.

It is a “common creed”, he writes on his blog, “of all the anti-interventionists out there” that Adam Smith’s “invisible hand is out there, and it knows what it’s doing”, and “economists and government officials cannot possibly second-guess the market in any useful way.”

“This contradiction has always been a core peculiarity of the Austrians”, he adds.

He thus attempts to attribute to the Austrian school a “contradiction” that is really just the product of his own willful ignorance.

First of all, what is it, exactly, that he is trying to deny with his comments about the “invisible hand” of the market? That prices in a free market aren’t determined by supply and demand? That they don’t tend towards an equilibrium in which a producer of a good is able to satisfy consumer demand for it, without either running out of the good before everyone willing to pay that price for it has done so or having a stock of the good on the shelves unable to be sold?

Secondly, notice that Krugman is here expressing his belief that wise government bureaucrats, guided by preferences that are at best arbitrary, absent this pricing system, can know better than the free market how to more efficiently direct scarce resources towards productive ends, that a better use of resources can be achieved through the use of coercion to confiscate wealth from one group of people in order to bestow on another than through individuals acting to make voluntarily exchanges in the marketplace for mutual benefit.

There isn’t any such “contradiction” in Austrian economics as Krugman would have his readers believe, although it is, ironically, accurate to say that that an ability to predict certain of the negative consequences of central bank money printing is “peculiar” to this school of thought.

How can Krugman deny that there were predictable negative consequences and misallocation of resources from the Federal Reserve’s inflationary monetary policy when students of the Austrian school like Ron Paul in fact accurately predicted both the dot-com and the housing bubble? How can Krugman suggest that the Fed’s lowering of interest rates through monetary inflation didn’t send the housing market “wildly off course” by creating an unsustainable boom when he himself advocated that the Fed inflate to lower interest rates specifically in order to create a housing bubble?

Ah, but therein lies the explanation for Krugman’s willful ignorance, obfuscation, and denial. He can’t admit that he was wrong, and that someone like Ron Paul was right, and thus he continues to try in vain to discredit the Austrian school, including with his constantly repeated mantra (which I discussed in this Foreign Policy Journal editorial) that the Austrian economists have been “wrong about everything”.

How was Ron Paul able to so accurately predict the housing bubble and the financial crisis it precipitated? Because he understands the Austrian theory of the business cycle. He understands that interest rates, too, are a price, determined in a free market by supply and demand, but in our centrally-planned economy by the arbitrary whims of a small group of individuals in a boardroom at the Federal Reserve. And he understands that artificially low interest rates cause distortions in the market by sending wrong signals to entrepreneurs and investors.

Ron Paul understands that by lowering interest rates artificially, meaning below where they otherwise would be if determined by the market, the signal to entrepreneurs and investors is that rates of savings are higher than they actually are, that people are consuming less and saving more. And so, in order to meet the future demand from this perceived deferred spending, they will invest more in assets, like capital goods, stocks, or housing. They invest in longer-term projects to increase productive capacity in anticipation of the future demand when people start spending again.

Except that the pool of capital for all this investment doesn’t actually exist. It only appears to exist because of central bank monetary policy. And so as the excess credit enters the economy and finds its way into certain sectors, prices in those sectors are bid upwards, until they get so high that more and more of the longer-term projects that were invested in are no longer able to be funded, and the malinvestment reveals itself.

When you understand the Austrian theory of the business cycle, or at least the basic gist of it (as I have tried to outline briefly and simply here to the best of my own knowledge), it becomes clear that it isn’t a “contradiction” at all to think that the “invisible hand” of the free market is “out there” and “knows what it’s doing” and at the same time to believe that this same market “can be sent wildly off course if the central bank prints too many pieces of green paper”. On the contrary, these are not contradictory but complimentary beliefs.

Thus one can see that the only “contradiction” is the one Krugman invents in his own mind, by virtue of his own willful ignorance. Unfortunately, it isn’t true that the only person Paul Krugman is fooling is himself. Despite his abysmal record and complete unwillingness to even try to honestly understand the economic theories of the Austrian school, he remains extremely influential.

For a review of his record on the housing bubble, and how his predictions and policy prescriptions compared with Ron Paul’s, see my book Ron Paul vs. Paul Krugman: Austrian vs. Keynesian economics in the financial crisis.

“Highly recommended. Cogent, passionate, clear, informed. Also quite readable. A must for those interested in economics. Jeremy Hammond will be an author to watch.” — Gene Epstein, economics editor at Barron’s magazine