The Geniuses in Washington and Their Support for the Syrian Rebels

In the brilliant minds of those running the U.S. government, if a policy is failing, the obvious solution is to just keep doing more of the same thing only on an even bigger scale. 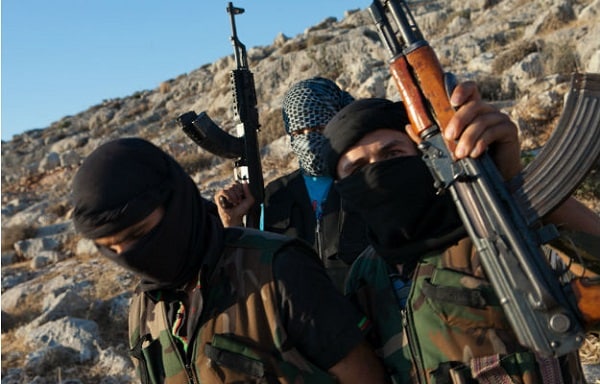 An Associated Press article last month titled “US surveillance, arming of Syrian rebels under debate as House takes up defense bill” enlightened us that:

The House also will consider an amendment that would bar funds for any military action in Syria if it violated the War Powers Resolution.

So, let’s see…. The geniuses in the Congress want to make a law that would forbid themselves from providing funds for illegal military action. Hey, why not just pass a law forbidding government from doing anything that is unconstitutional in the first place?! Oh, that’s right, that law already exists. It’s called the Constitution.

But that brilliant idea isn’t the one I want to focus on here. Further into the article, we learn:

The United States has been providing humanitarian assistance to the opposition seeking to overthrow the Assad government. The administration has recently taken steps to arm rebels with weapons and ammunition, a move welcomed by some in Congress but troubling to other lawmakers.

Separately, members of the House Intelligence Committee who had balked weeks ago at the Obama administration’s first attempt to pay for lethal aid for the Syrian rebels said Monday that their concerns largely had been addressed.

“After much discussion and review, we got a consensus that we could move forward with what the administration’s plans and intentions are in Syria consistent with committee reservations,” Rogers said in a statement.

Money to arm the rebels would come from current classified intelligence budgets.

At a Capitol Hill news conference on Tuesday, Boehner expressed his support for the move.

“I think their effort to help the right set of rebels in Syria is in our nation’s best interest,” he told reporters.

So arming Syrian rebels would be in the U.S.’s “best interest”, we are informed by the genius Speaker of the House, John Boehner. That same day, we learned from Reuters that

President Barack Obama will move forward with a plan for the United States to arm the struggling Syrian rebels after some congressional concerns were eased, officials said on Monday….

The White House announced in June that it would offer military aid to vetted groups of Syrian rebels after two years of balking at directly sending arms to the opposition….

But both Republicans and Democrats on the House and Senate intelligence committees had expressed worries that the arms could end up in the hands of Islamist militants in Syria like the Nusra Front, and would not be enough to tip the balance of the civil war against President Bashar al-Assad anyway.

As for that “consensus” that directly arming the rebels would be in the U.S.’s best interests, we learned that dissent was not entirely nonexistent.

“…I think we also have to expect that some of the weapons we provide are going to get into the hands of those who would use them against us,” Schiff said.

He said his view is probably a minority one within the intelligence committee….

But it seems his view is not so much a “minority” one in the intelligence committee, into which the New York Times provided some further insights:

A senior American intelligence official on Saturday warned that the Syrian conflict could last “many, many months to multiple years,” and described a situation that would most likely worsen regardless of whether the Syrian leader, President Bashar al-Assad, fell.

The comments by David R. Shedd, the deputy director of the Defense Intelligence Agency, were one of the strongest public warnings about how the civil war in Syria has deteriorated, and he seemed to imply that the response from the United States and its allies had so far been lacking.

Mr. Shedd suggested that in addition to strengthening the more secular groups of the fractious Syrian opposition — which the Obama administration has promised to arm with weapons and ammunition — the West would have to directly confront more radical Islamist elements. But he did not say how that could be accomplished.

“The reality is that, left unchecked, they will become bigger,” Mr. Shedd told the Aspen Security Forum, an annual meeting on security issues. “Over the last two years they’ve grown in size, they’ve grown in capability, and ruthlessly have grown in effectiveness.”

The Times continued on to cite Mr. Shedd pointing out that if the U.S. effort to overthrow the Assad regime in Syria by directly arming the rebels is successful, then

radical elements like the Nusra Front would fight to control parts of the country. “They will fight for that space. They’re there for the long haul.”

Mr. Shedd offered a sobering assessment of America’s ability to draw distinctions among an opposition that he said numbered about 1,200 groups….

Mr. Shedd said he was particularly concerned that the Syrian revolution, unlike the other Arab uprisings, was far more likely to explode than implode, and that Jordan and Iraq would be caught in the conflict and instability….

“Al Qaeda Iraq will emerge stronger as a result of its experience inside of Syria,” he said.

Incidentally, the same day as the aforementioned A.P. and Reuters articles, the Times reported:

Under that headline, the Times noted:

“We are concerned about the increased tempo and sophistication of Al Qaeda operations in Iraq,” said a senior State Department official….

Regional volatility, including the Syrian war and Iran, are compounding Iraq’s instability.

WASHINGTON — A rising number of radicalized young Muslims with Western passports are traveling to Syria to fight with the rebels against the government of Bashar al-Assad, raising fears among American and European intelligence officials of a new terrorist threat when the fighters return home.

More Westerners are now fighting in Syria than fought in conflicts in Iraq, Afghanistan, Somalia or Yemen, according to the officials. They go to Syria motivated by the desire to help the people suffering there by overthrowing Mr. Assad. But there is growing concern that they will come back with a burst of jihadist zeal, some semblance of military discipline, enhanced weapons and explosives skills, and, in the worst case, orders from affiliates of Al Qaeda to carry out terrorist strikes.

“Syria has become really the predominant jihadist battlefield in the world,” Matthew G. Olsen, the director of the National Counterterrorism Center, told a security conference in Aspen, Colo., this month….

Many have joined ranks with the Qaeda-aligned Nusra Front, which American officials have designated as a terrorist group.

So, to sum up, the geniuses in Washington think that it is in the U.S.’s “best interest” to pursue a policy of regime change by seeking to overthrow the government of Syria by directly arm rebels whose ranks include the al-Qaeda affiliated Nusra Front despite bipartisan concerns in Congress that “the arms could end up in the hands of Islamist militants”, which they say they would like to prevent despite the fact that there is no clear plan for “how that could be accomplished”, and despite the view of the intelligence community the consequence of this effort, if it is actually successful, will be increased regional instability and an increased threat of terrorism, including the possibility of blowback against the U.S. itself

So, you see, in the brilliant minds of those running the U.S. government, if a policy is failing, the obvious solution is to just keep doing more of the same thing only on an even bigger scale.