Did You Hear the One About the Launch of Obamacare’s Insurance Exchanges?

What was the "Most Popular" question on HealthCare.gov the day before the exchanges were launched?

Reporting on the “quickly encountered technological problems” experienced by many people visiting HealthCare.gov, which is host to Obamacare’s online insurance exchanges, the New York Times opened with the spin:

Millions of Americans visited new online health insurance exchanges as enrollment opened on Tuesday, suggesting a broad national appetite for the affordable coverage that President Obama has promised with his health care law.

Paul Krugman ran with it, blogging that the “glitches” were “a bit worse than expected” because traffic volume to the site was “much bigger than predicted.” This was “good, not bad news” because it showed that “young, healthy people” had not been scared away from signing up to get an insurance policy by the “combination of ignorance and misinformation”. “Lots of people logging on and signing up on the very first day,” Krugman asserted, was “an early indication that it’s going to be fine, that plenty of people will sign up for the first year of health reform.”

But what was the “Most Popular” question on HealthCare.gov the day before the exchanges were launched? 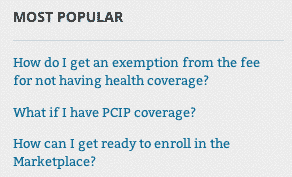 How do I get an exemption from the fee for not having health coverage?