Keynesian Economists Are the Problem

It is deeply unfair to blame textbook economics either for the crisis or for the poor response to the crisis. The mania for financial deregulation, for example, didn’t come out of standard economic analysis — in fact, it flew in the face of the canonical model of banking crises, Diamond-Dybvig, which suggested both a crucial role of government guarantees to prevent self-fulfilling panics and the need for regulation to control the moral hazard such guarantees would create….

As for the crisis response, the remarkable thing has been the determination of policy makers to do the opposite of what textbook macroeconomics said they should have been doing. Slashing spending when interest rates are zero, jumping at any excuse to raise rates, aren’t about orthodox economics being applied….

First of all, by “textbook macroeconomics”, Krugman means Keynesian economics.

Second, the claim that “deregulation” was the cause of the financial crisis is nonsense. The primary cause was the Federal Reserve’s inflationary monetary policy intended to push interest rates down, which, along with government policy of encouraging homeownerehip, caused the housing bubble that precipitated the crisis. Paul Krugman, as per his Keynesian economic theory, advocated for this Fed policy of lowering interest rates to spur a boom in housing. In fact, he went so far as to advocate that “Alan Greenspan needs to create a housing bubble to replace the NASDAQ bubble.” So one can begin to see why Krugman tries to shift blame for the crisis onto a red herring like “deregulation”.

Krugman is presumably alluding to the partial repeal of the Glass-Steagall Act, its separation of commercial from investment banking. But what did this have to do with the crisis? The financial institutions hardest hit by the crisis, like Lehman Brothers and Bear Stearns, were solely investment banks, while commercial banks or those with both commercial and investment banking, like JP Morgan Chase, weathered the storm far better. The problem with the repeal of Glass-Steagall was that it didn’t go far enough. It left in place the system of federal deposit insurance, the explicit promise of taxpayer bailouts if the banks got into trouble, thus incentivizing their riskier behaviors. Notice that Krugman actually acknowledges that this “moral hazard” is a product of government regulation.

As a further illustration of how government regulation — as opposed to deregulation — was part of the problem, take the credit ratings agencies. An excerpt from my book Ron Paul vs. Paul Krugman: Austrian vs. Keynesian economics:

The few Nationally Recognized Statistical Rating Organizations, such as Standard & Poor’s and Moody’s, benefit from an oligopoly market structure in which their ratings are recognized by the SEC. The government has to a large extent made these agencies immune from civil and criminal liability for malfeasance, even though the SEC relies on their ratings in making regulatory determinations, which is to say the SEC has outsourced some of its regulatory functions to the ratings agencies oligopoly. A good credit rating thus implies regulatory compliance of the issuer being rated, which pays for its own rating. Traditionally, ratings agencies had sold ratings to investors, but once this cartel was established, they began charging fees to rate issuers of debt, which is where most of their revenue now comes from. In a free market, this apparent conflict of interest might not pose such a hazard, since the agencies would still depend on the credibility of their ratings to remain competitive. However, the same cannot be said when any competition they might otherwise have is eliminated by government decree. Going back to Krugman’s question, “Why were the bond-rating agencies taken in (again), and where were the regulators?” The answer is that they were the regulators! And this was not the failure of a free market, but of government intervention in the market.

Third, Krugman tries to argue that policymakers have been determined to do precisely the opposite of what “textbook” — that is, Keynesian — economics prescribes. But notice his careful choice of words. He doesn’t say the government has actually done the opposite of what Keynesianism prescribes, just that policymakers are “determined” to do so. Despite their ostensible determination, they have evidently failed. As the Congressional Budget Office stated in February, “federal spending rises over the next few years in dollar terms”. A CBO update in May showed that government outlays will increase from nearly $3.5 trillion this year to $3.6 trillion in 2014, and upwards from there.

As for interest rates, well, needless to say, the Fed’s policy has actually been one of massive monetary inflation intended to push interest rates down. Here’s what the increase in the monetary base looks like: 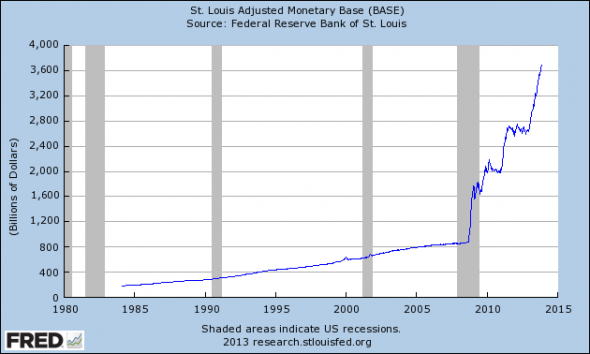 Krugman got one thing right, at least. We need different economists, because economists like Paul Krugman are very much a part of the problem.

By the way, I’m having a Thanksgiving book sale! Get my aforementioned book, Ron Paul vs. Paul Krugman: Austrian vs. Keynesian economics in the financial crisis, on your Kindle for just $0.99! Learn about the true causes of the housing bubble and financial crisis it precipitated and save $4.00! What more could you ask for? Thanksgiving Day through Saturday only, take advantage of this special 81% discount.