Franklin D. Roosevelt gives a national address, one of his "fireside chats", on the merits of his "recovery" program, at the White House in Washington, DC, on June 28, 1934. (Harris & Ewing/Public Domain)

Paul Krugman repeatedly cites Roosevelt's 'mistake' of 1937 to support his position that government should run a deficit. The trouble is, it doesn't.

To support his argument that we “need to run deficits to support employment in bad times”, Paul Krugman has repeatedly pointed to what he calls “the great mistake of 1937, when F.D.R. prematurely slashed spending, sending the U.S. economy — which had actually been recovering fairly fast until that point — into the second leg of the Great Depression.”

On his blog last month, he complained that “the public doesn’t ‘get’ macroeconomics” since there is a widely held view that the government should cut spending.” He then pointed out how the public by a strong majority in 1936 wanted the government to balance the budget. “And guess what”, Krugman remarked: “FDR went along with public opinion, scaled back stimulus, and plunged the nation back into recession — with devastating consequences in the 1938 midterm election.”

In his regular column a couple days later, he repeated that “it’s very hard to communicate even the most basic truths of macroeconomics, like the need to run deficits to support employment in bad times.” Then he repeated:

Consider what happened in 1936. F.D.R. had just won a smashing re-election victory, largely because of the success of his deficit-spending policies. It’s often forgotten now, but his first term was marked by rapid economic recovery and sharply falling unemployment. But the public remained wedded to economic orthodoxy: by a more than 2-to-1 majority, voters surveyed by Gallup just after the election called for a balanced budget. And F.D.R., unfortunately, listened; his attempt to balance the budget soon plunged America back into recession.

But as I’ve previously pointed out:

The trouble is that this argument makes no sense whatsoever. Just for starters, while it is true that spending in ’37 was less than in ’36, it was still more than in every year prior to that, when the supposed recovery was underway. And the economy rebounded in 1938. But spending was even lower that year. The story doesn’t get much better if looking at the deficit rather than total spending, since the deficit was reduced dramatically in 1938, largely due to increased tax revenues [as opposed to spending cuts alone]. Here’s a chart of government receipts and outlays: 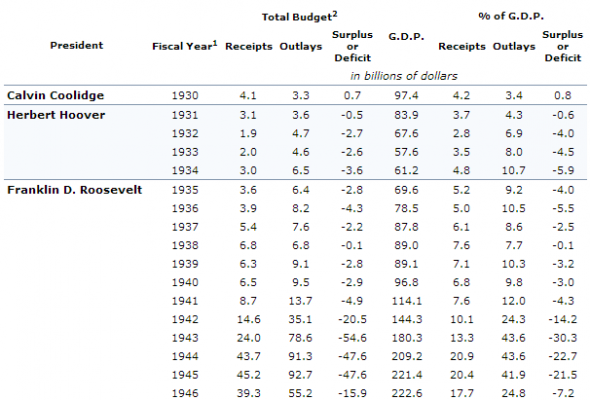 Roosevelt never did do what the public wanted, but ran a deficit every single year of his presidency. Well, deficit spending obviously didn’t do the trick. Krugman argues that this is because government just wasn’t spending enough. But, again, the government was spending even less in previous years while what Krugman calls a “recovery” was going on, and, again, the economy rebounded in 1938, when spending was even lower and the deficit even less than in 1937.

So what really caused the economy to slump in 1937? Just as the Fed’s monetary inflation caused the dot-com and then the housing bubbles, it was an increase in the money supply that fueled an unsustainable boom masquerading as what Krugman considered “economic recovery” (just as he considered it a good idea to print money to push down interest rates to fuel the housing bubble).

Keep in mind also that Krugman is arguing that we need more government spending to fight unemployment. Consider what Hoover’s Treasury Secretary Andrew Mellon had to say about unemployment in 1931:

In this country, there has been a concerted and determined effort on the part of both government and business not only to prevent any reduction in wages but to keep the maximum number of men employed, and thereby to increase consumption.

Now, let’s see what Paul Krugman has written about the consequences of government price fixing the price of wages above where they would otherwise be if determined by the market and supply and demand:

So what are the effects of increasing minimum wages? Any Econ 101 student can tell you the answer: The higher wage reduces the quantity of labor demanded, and hence leads to unemployment.

Here’s what Krugman has written in two different economic textbooks about it:

And yet, instead of advocating for eliminating minimum wage laws, Krugman advocates for increasing the federal minimum wage and at the same time increasing government spending, citing the “mistake” of 1937 as supposed support for his position. Getting back to that, here’s what Roosevelt’s Treasury Secretary Henry Morgenthau had to say about it in 1939:

We have tried spending money. We are spending more than we have ever spent before and it does not work…. I say after eight years of this Administration we have just as much unemployment as when we started…. And an enormous debt to boot!

Perhaps Roosevelt should have actually tried doing what the public wanted and balancing the budget, instead of doing what Krugman advocates and running a deficit every year.