The mainstream media has standard refrains about the Palestinian group Hamas that serve to misinform the public and manufacture consent for US policy.

Hamas, the Iran-backed group that took control of the Gaza Strip in 2007, is a violent, extremist organization committed to Israel’s destruction. Gaza militants regularly fire rockets into Israel; in 2012, Hamas fought an eight-day war with Israel.

That’s the obligatory standard refrain in the mainstream media when it comes to Hamas, this particular example coming from the New York Times, the standard-bearer of propaganda serving to manufacture consent for the US policy of financially, militarily, and diplomatically supporting Israel’s violations of international law and violations of human rights against the Palestinian people.

Let’s break this down, shall we?

The Hamas ‘Coup’ in Gaza

The Times, when repeating how the Hamas “took control of” Gaza, never feels inclined to inform readers how this occurred. It is typical for it to be described as a Hamas “coup” in Gaza. The truth, however, is quite different.

Naturally, the Times doesn’t inform its readers that Hamas actually came to power through democratic elections in 2006. This outcome, however, was not acceptable to the US and Israel, who conspired with the head of the Palestinian Authority, President Mahmoud Abbas, to overthrow the Hamas government. Factional violence thus broke out between Hamas and Fatah (the party to which Abbas belongs), with the result being Hamas expelling Fatah and remaining in control of Gaza while the Abbas-headed government remaining illegitimately in power in the West Bank.

Likewise, it just wouldn’t do to mention the fact that Hamas has repeatedly, since at least 2005, reiterated its acceptance of a Palestinian state alongside Israel within the pre-June 1967 borders, in accordance with the international consensus on a two-state solution to the conflict.

Nor would it do to inform readers that in fact Hamas has largely held to its ceasefire agreements, which have repeatedly been violated by Israel. Moreover, Hamas has encouraged other factions to abide by ceasefires, including with harsh crackdowns on extremist Salafist groups.

It was Israel, for example, that violated a six-month ceasefire in 2008, following which it launched its 22-day full-scale military assault on the civilian population and infrastructure of the Gaza Strip, code-named “Operation Cast Lead”.

Likewise, the eight-day war in 2012 the Times refers to was begun by Israel when it used the opportunity of a ceasefire that had just been brokered by Egypt and that was being honored by Hamas to draw a Hamas official out of hiding in order to assassinate him. 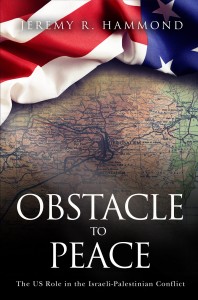 I’ve extensively documented the full details of all of these points in my forthcoming book, Obstacle to Peace: The US Role in the Israeli-Palestinian Conflict, which systematically and thoroughly deconstructs the mainstream narratives about the conflict. Here, for example, is a relevant excerpt from Chapter 2, which covers “Operation Cast Lead” in great detail:

[A]s for the obligatory claim that Hamas sought Israel’s destruction, also commonly manifest as a claim that Hamas rejected Israel’s “right to exist”, Hamas had in fact long declared its intention of seeking a Palestinian state alongside Israel. This is a position Hamas has reiterated constantly over the years.

To cite a few examples, in early 2005, Hamas issued a document stating that goal and “unequivocally” recognizing the pre-June 1967 line as Israel’s border.[i]

In early 2006, Hamas official Mahmoud al-Zahar publicly stated that Hamas was seeking a Palestinian state and would accept a long-term truce with Israel if it withdrew from the territories it occupied in 1967.[ii]

Ismail Haniyeh, as already noted, had reiterated to the Washington Post in February 2006 that Hamas would accept an agreement for “the establishment of a Palestinian state with Jerusalem as its capital with 1967 borders”.[iii]

In December 2006, Hamas leader Khaled Meshal said that “all the Palestinian factions agree to a return of Israel’s borders to pre-1967 designations…. We accept the need for two countries to exist, but Israel has no legitimacy so long as the occupation continues.”[iv]

Former U.S. President Jimmy Carter met with Hamas officials in April 2008 and relayed their acceptance of a Palestinian state on the 1967 lines and willingness to “accept the right of Israel to live as a neighbor next door in peace” if it withdrew.[vi]

Hamas’s “ultimate goal”, Carter said, “is to see Israel living in their allocated borders, the 1967 borders, and a contiguous, vital Palestinian state alongside.”[vii]

Meshal at the same time repeated, “We accept a state on the June 4 line with Jerusalem as capital, real sovereignty and full right of return for refugees but without recognizing Israel…. We have offered a truce if Israel withdraws to the 1967 borders, a truce of 10 years as proof of recognition.”[viii]

Haaretz explained that “Meshal used the Arabic word hudna, meaning truce, which is more concrete than tahdiya—a period of calm—which Hamas often uses to describe a simple cease-fire. Hudna implies a recognition of the other party’s existence.”[ix]

On November 8, 2008, four days after Israel’s violation of the ceasefire, Haniyeh once again reiterated his government’s willingness to accept a Palestinian state within the 1967 lines.[x]

Stay posted! Subscribe to my newsletter below to get more inside looks and updates about the book.