Paul Krugman argues that what is needed to grow the economy is more government spending, but his fallacies are glaring.

Paul Krugman in his Monday column repeated his familiar mantra that what is needed to grow the economy is more government spending, but his fallacies are glaring. He writes (bold emphasis added throughout):

[T]he most important thing we need is sharply increased public investment in everything from energy to transportation to wastewater treatment.

How should we pay for this investment? We shouldn’t — not now, or any time soon. Right now there is an overwhelming case for more government borrowing.

He presents two key arguments to support this assertion:

First, we have obvious, pressing needs for public investment in many areas. In Washington, the aging Metro is in such bad shape that whole lines may have to be shut down for maintenance. In Florida, green slime infests beaches, in large part because failure to upgrade an 80-year-old dike or to purchase more land as a runoff area is forcing the Army Corps of Engineers to release polluted water from Lake Okeechobee. There are similar stories all across America.

Put these two facts together — big needs for public investment, and very low interest rates — and it suggests not just that we should be borrowing to invest, but that this investment might well pay for itself even in purely fiscal terms. How so? Spending more now would mean a bigger economy later, which would mean more tax revenue.

So let’s examine his fallacies:

First, his claim that government spending produces economic growth ignores the opportunity cost — how that money otherwise could have been spent. And as a simple logical truism, government bureaucrats making decisions at best arbitrarily (assuming only good intentions) do not know better than the market with its pricing system how to efficiently allocate scarce resources toward productive ends as determined by the will of consumers.

Second, his observation that the government is able to borrow at low interest rates ignores why it is able to do so: namely, because the Federal Reserve, like central banks around the globe, has kept interest rates at near zero artificially. That is to say, it has engaged in price fixing, pushing interest rates below where they otherwise would be if determined by the market rather than by a handful of officials in a board room. 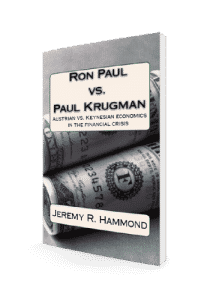 Interest rates are a critical price in a free market economy as they indicate the amount of capital available. By pushing interest rates below where they would otherwise be, it creates an illusion of large pools of available capital. This, along with the government’s policy of encouraging homeownership, is what created the housing bubble. In fact, Paul Krugman in the years prior to the bubble’s bursting had been advocating a Fed policy of low rates specifically to fuel a boom in housing!

For the full story on that, read my book Ron Paul vs. Paul Krugman: Austrian vs. Keynesian Economics in the Financial Crisis.

Of course, he failed to learn the lesson from that experience and instead of acknowledging the error of his ways, he’s doubled down and called for even more of what caused the problem in the first place, only on an even greater scale.

Third, his argument that government should borrow at low rates and spend assumes that growth comes from spending. It does not. Krugman ignores that how money is spent matters. If the government paid half of Americans to go around digging up holes and the other half to go around filling them in, there’d be plenty of spending, but would there be economic growth?! Certainly not. On the contrary, since that money otherwise could have been directed toward productive ends, the country would be poorer as a result of government spending.

Of course, Krugman doesn’t suggest doing such an obviously unproductive thing, but, again, he is simply assuming that directing scarce resources toward the ends he identifies would be the most efficient use of that money, which overlooks the opportunity cost and, absent market prices indicating how resources ought to be directed, is a completely arbitrary judgment.

Moreover, economic growth does not come from spending, per se, but from saving. Coming back to the importance of interest rates, in a free market, when rates of savings are high, banks seek to attract borrowers by lowering interest rates, and when rates of savings are low and reserves dwindling, banks seek to to attract depositors by raising interest rates. These rates are a price indicating to investors and entrepreneurs the amount of capital available for longer-term investment, such as in capital goods to improve means of production, resulting in more and better goods available at lower prices — thus increasing society’s standard of living.

When low interest rates are determined through central planning, rather than through the workings of the market, it creates the illusion of high rates of savings when in reality the capital isn’t available to sustain all the borrowing and spending the low rates incentivize. The result is the illusion of growth we know as a bubble.

Doing more of the same of what’s caused the US’s current economic woes in the first place only on an even greater scale cannot possibly at the same time also be the solution.

Don’t make the same mistake as Krugman of ignoring the lessons of the past. Pick up your copy of Ron Paul vs. Paul Krugman today!

Or better yet, sign up for Tom Woods’ Liberty Classroom to get access to full courses teaching you Austrian economics and the errors of the Keynesian economics Krugman clings to, and I’ll send you Ron Paul vs. Paul Krugman plus my two other books completely free as a bonus.

Click here to learn more about Liberty Classroom and how to get my three free books!