Has the Hib Vaccine Simply Shifted the Risk Burden to the Elderly?

Maybe instead of using our children as subjects of a mass uncontrolled experiment, we should work on developing natural herd immunity to H. influenzae.

Haemophilus influenzae type b (Hib) was a common childhood infection in the US before the development of the Hib vaccine. It’s unrelated to the influenza virus and, indeed, isn’t even a virus; but the fact that the disease was caused instead by a bacterium wasn’t discovered until after the organism had already got its name. Type b is one of six encapsulated serotypes of the bacterium, which are designated types a through f. There are also unencapsulated or “nontypeable” strains. Type b accounted for 95 percent of H. influenzae cases and was the most common cause of bacterial meningitis in children under age five.

Pretty much everyone was infected as a child, but most people showed no symptoms, and full immunity was generally acquired by the age of five or six. The duration of this immunity was lifelong as the disease rarely occurred in people over age five. Infants under six months of age were protected by antibodies transferred from the mother prior to birth through the placenta and after birth through breastmilk. Mothers were able to provide this protection during these vulnerable early months of life precisely because they had themselves been infected as children and therefore had acquired a robust, long-lasting immunity that was naturally boosted through repeated exposures to the circulating bacteria. The same mechanisms also afforded protection to the elderly, who are at a greater risk of dying from infection.

This has all changed as a result of mass vaccination.

While the incidence of Hib disease in children has decreased by 99 percent since the introduction of the vaccine, a study published in 2011 in the journal Emerging Infectious Diseases found that H. influenzae infections among adults were increasing, and that invasive disease caused by the bacterium was disproportionately affecting the elderly. 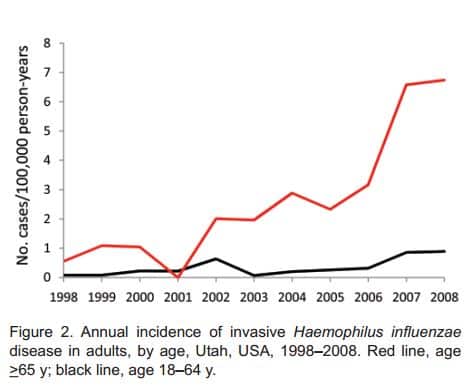 The team of researchers who authored the study looked at reported cases of H. influenzae infections in Utah from 1998 to 2008, and what they found was that incidence had increased, particularly among people aged 65 or older. This was a trend, they noted, that was similar to the findings of other studies in other states. 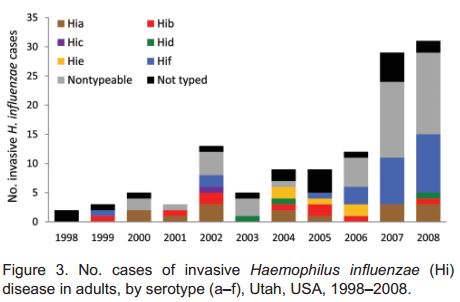 In other words, mass vaccination for type b simply caused a genetic shift resulting in non-type b strains circulating more dominantly, as well a shift in the risk burden away from children, among whom it was mostly well tolerated and never led to disease, and onto the elderly, among whom H. influenzae infection is associated with a high mortality rate.

In fact, 22 percent of cases resulted in death, with over two-thirds of deaths occurring among those aged 65 or older. Furthermore, the researchers noted that the death rate did not differ significantly by serotype, meaning that other types could be just as virulent as type b, which is the only serotype that the vaccine offers protection from.

Commenting in 2012 on the experience after twenty years of Hib vaccination in the United Kingdom, Dr. Shamez N. Ladhani in the journal Clinical Therapeutics noted that the vaccine had proved disappointing in terms of the duration of immunity it conferred. He explained how, in the pre-vaccine era, infants were usually protected at birth by high levels of transplacentally acquired maternal antibodies, which waned over time to a low level generally by about six months of age. By around eleven months, the child’s own immune system was developed enough to begin generating antibodies.

Most children developed immunity through exposure to H. influenzae that never progressed to the point of causing symptoms; it was only “occasionally” that the bacterium caused infectious disease. In the US, the annual rate of Hib infectious disease in children under five was 88 per 100,000, and it was even less common in the UK and throughout Europe. The known risk factors for Hib disease included lack of breastfeeding.

The long duration of immunity conferred by natural infection had to do with the formation of memory B cells that, upon reinfection, were able to produce more antibodies more rapidly than the immune system was able to do during the initial exposure.

Moreover, over time, fewer antibodies were required to successfully fight off infection due to the increasing strength with which antibodies were able to bind to the antigen, which is known as antibody avidity. Avidity maturation is also a feature of immunologic memory and is understood to result from repeat exposures to Hib.

One consequence of mass vaccination is the interruption of transmission of the bacteria. The logical corollary is that vaccination impairs the ability of children today to develop the robust, long-lasting immunity that natural infection conferred.

Natural infection conferred a level of antibodies that were sufficient to protect against disease without interrupting transmission, meaning that people could be asymptomatic carriers of the disease, which is precisely what enabled the development of a robust, lifelong immunity that protected people through old age.

The immunity conferred by the vaccine, on the other hand, wanes quickly, requiring repeated “booster” shots. (The CDC’s routine childhood schedule calls for Hib vaccination at two, four, six, and between twelve and fifteen months of age.)

As a review article published in the journal Immunology in 2004 observed, the Hib vaccine was introduced despite the fact that scientists only “partially understood” how they worked.

The authors acknowledged that it was “possible” that vaccinated individuals have “a reduced ability to respond to Hib” than individuals who acquired immunity through natural exposure (emphasis added).

During the pre-vaccine era, being exposed in early infancy was actually a good thing since newborns were generally protected by maternal antibodies and the exposure primed their immune system to be able to respond effectively to prevent infectious disease upon subsequent re-exposures.

Mass vaccination has interrupted transmission, which was the very thing that, through repeated stimulation of antibody production, induced “both individual and herd immunity.”

In other words, the natural herd immunity that the population might otherwise have has been destroyed through mass vaccination.

This is particularly worrisome for adults, who may lose their immunity in the absence of natural boosting from routine exposure.

Furthermore, vaccine pressure, the authors predicted, might just result in an increased prevalence of other strains of H. influenzae.

Vaccine-conferred immunity wanes quickly, such that a child will lose a protective level of antibodies within two years of vaccination without the booster after age one; and even with the booster, immunity lasts no more than ten years in the absence of natural boosting.

Perhaps instead of using our children as subjects of a mass uncontrolled experiment that could potentially have disastrous unintended consequences, scientists and public health officials should direct their energies toward understanding ways to improve the development of natural herd immunity.

After all, for the majority of children who get vaccinated, the vaccine confers no real benefit, but comes at a considerable opportunity cost.

The New York Times claims it’s wrong to say that the risk to children of dying from COVID-19 is “basically 0”, but it truly is near zero.