A Newsweek propaganda piece absurdly lies that vaccination entails no health risks -- and that anyone who knows better has no "faith in science".

There’s a Newsweek opinion article making the rounds on social media this week that shamelessly lies to readers by communicating the message that getting vaccinated does not come with any health risks.

The very title of the piece reveals that it’s nothing more than mindless vaccine propaganda: “The Anti Vaxxer Movement Is Growing—We Need to Restore Faith in Science”. 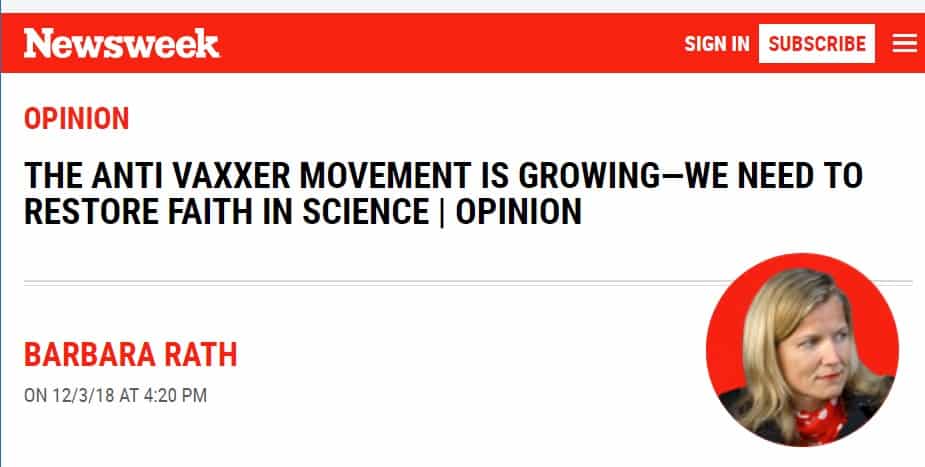 A screenshot of the Newsweek propaganda piece lying that vaccination entails no risk.

“Anti Vaxxer”, of course, is the media’s derogatory label for anyone who dares to question public vaccine policy. Anytime you see this label being tossed out, you can know with 100% certainty that what you are reading is not a science-based discussion, but pure propaganda.

One would think that doing a modicum of research into why more and more people are refusing vaccines for themselves or their children would be a requirement for writing an article about it. But not when the purpose is to advocate public vaccine policy instead of properly informing the public so they can make a truly informed choice!

So, to fill anyone in who isn’t already in the know: the problem is emphatically not that people are losing their faith in science. On the contrary, it’s that they recognize that what public health officials and propaganda rags like Newsweek say science says about vaccines and what science actually says are two completely different and mutually incompatible things.

They recognize that, when it comes to vaccines, the mainstream media prefers to do public policy advocacy instead of journalism.

But she doesn’t want to do that by doing the science and finding safer and more effective ways of preventing disease.

Instead, she wants to do that by straight up lying to people about vaccine safety.

We can see this by reading just the first two sentences of the article: “The anti-vaxx movement has been gaining momentum in countries across the globe. In a world of post truth politics, more and more parents are buying into the belief that vaccines come with health risks.”

So there you have it. The implication, of course, is that vaccines don’t come with health risks—which is an utterly stupid and recklessly irresponsible lie.

Seriously, how insulting to our intelligence can these pro-vaxxers—to borrow their derogatory label—be?

How stupid do they think we are?

Notice that, by definition, an “anti-vaxxer” is someone believes that there are health risks associated with vaccination.

As an illustration of just how idiotic this article is, by that definition, the vaccine manufacturers themselves are “anti-vaxxers” since they include package inserts with all their vaccine products warning consumers of the known associated health risks.

For mothers, contraindications to vaccination include pregnancy, as “the possible effects of the vaccine on fetal development are unknown” since there are “no adequate studies” into that question. “However,” Merck appropriately adds, “it would be prudent to assume that the vaccine strain of virus is also capable of inducing adverse fetal effects.” The vaccine-strain mumps virus “has been shown to infect the placenta and fetus”. Studies have shown that the vaccine-strain of rubella virus can be transmitted to infants through the breast milk. Whether this is also true of the measles and mumps viruses “is not known”. Merck advises that “pregnancy should be avoided for 3 months following vaccination” and that “Caution should be exercised when M-M-R II is administered to a nursing woman.” The vaccine also “has not been evaluated for carcinogenic or mutagenic potential, or potential to impair fertility.” Among those who should not receive it are children who are hypersensitive to any of the vaccine’s components, including gelatin and eggs, the latter because the live viruses are propagated in chick embryo cell cultures. The rubella portion of the vaccine is propagated in “human diploid lung fibroblasts”; specifically, WI-38 (ATCC®CCL-75TM), which contaminates the vaccine with human DNA from an aborted female fetus. (This has raised some concern over “ethical problems” at the Vatican; specifically about “cooperation in evil” and the “unjust” practice of forcing parents “to act against their conscience”.) Another ingredient is “fetal bovine serum”. Another is “recombinant human albumin”; specifically, Recombumin® Prime, a product of Novozyems Biopharma US Inc. This is a genetically engineered protein (“recombinant” means it was made by dicing and splicing genetic material). The product was developed because of concerns that using the blood protein albumin from humans or cattle carries the risk of blood-borne contaminants like mycoplasma, prions, or viruses. (This has happened. In March 2010, the rotavirus vaccine Rotarix, manufactured by GlaxoSmithKline, was found to have been contaminated with a pig virus after it was administered to a million children.) Possible adverse reactions to the vaccine include:

But we’re supposed to believe that anyone who knows that vaccination is a medical intervention entailing risk is somehow anti-science!

The insults to our intelligence don’t stop there, of course. You can probably guess what the very next sentence in the Newsweek propaganda piece is about….

That’s right, you guessed it! The supposedly “debunked” link between vaccines and autism! Rath writes, “Many still believe the MMR (measles, mumps and rubella) vaccine is linked with autism, despite numerous scientific studies debunking this myth.”

Of course, “anti-vaxxer” parents know that the claim that science has disproven the hypothesis that vaccines can cause autism at least in a subpopulation of genetically susceptible individuals is a Big Lie.

The “anti-vaxxers” understand that, in reality, the number of studies examining the hypothesis that the CDC’s routine childhood vaccine schedule might be contributing to the autism epidemic is zero.

In fact, the body of studies the pro-vaxxers are referring to when they state their Big Lie has only considered one vaccine on the CDC’s schedule (the MMR) and one vaccine ingredient (Thimerosal, which by weight is about half ethylmercury, a known neurotoxin).

“Anti-vaxxers” also understand that the hypothesis is not only biologically plausible, but that those studies weren’t designed to test it.

Rath’s motive is illuminated further down the page, where she opines that “Restoring trust in vaccines and immunization requires innovative solutions….”

Notice that she’s dropped the pretense of restoring faith in science and just stated flatly that it’s faith in public vaccine policy that she’s really after—and these are two mutually incompatible aims.

She speaks of “the widening communication gap between patients and healthcare professionals.”

There is indeed such a communication gap. This is because the patients are doing their own research and thinking for themselves and most healthcare professionals simply are not.

The most fundamental communication gap, though, is that between what the public is told science says and what science actually says.

Of course, the aim of this Newsweek article isn’t to educate people about the science, but to advocate public vaccine policy. In fact, the whole purpose of the article is to promote a new mobile app developed by the Vienna Vaccine Safety Initiative, of which the author is co-founder and chair.

The app is called VaccApp, and as we can deduce from Rath’s implicit lie that getting vaccinated doesn’t come with any health risks, it isn’t designed to properly inform people about the science, but only to give them information to persuade them to follow the CDC’s vaccine recommendations.

In other words, we can glean from this Newsweek article that the VaccApp is less than worthless and you should not use it because it’s obviously going to be an untrustworthy source for information about whether or not to vaccinate.

If you want to be able to make a truly informed choice about whether to vaccinate, you need to know what science really says, as opposed to what you’re being told by mainstream propaganda outlets, who are just serving the function outlined by Edward Herman and Noam Chomsky in their book Manufacturing Consent. (That is, they are doing public policy advocacy to manufacture consent for the CDC’s vaccine recommendations, not journalism.)

The simple fact of the matter, as this mindless Newsweek piece so amply demonstrates, is that there is no serious discussion of the vaccine issue in the mainstream media.

So, if you’re not already on my mailing list, get real journalism on the vaccine issue by clicking here and entering your name and email address to sign up for my newsletter and download a free report explaining why the words “FDA approved” don’t mean much especially when it comes to how vaccines get to market.