Are You Prepared for a Recession?

Contrary to what you might read in the New York Times and other establishment media, the US economy is not doing fine. Another Fed-caused bust is coming.

The New York Times on July 19 published an article by Neil Irwin titled “The Economy Looks Solid, but the Fed Plans to Cut Rates Anyway. Here’s Why.” Irwin reports that the Federal Reserve plans to cut interest rates later this month “even though the United States economy, by most available evidence, is doing perfectly fine.” He explains the planned cut as a precautionary measure intended to coordinate the Fed’s monetary policy with that of other central banks.

But the US economy isn’t doing fine at all. And, regardless, interest rate cuts won’t fix the problem.

To support his assertion that the economy is doing just fine, Irwin states that the US job market “is quite healthy by any modern standard”.

But the caveat “by any modern standard” quite possibly renders this statement meaningless, unless Irwin means to say that a still-low labor force participation rate in today’s economy is nothing to be concerned about. 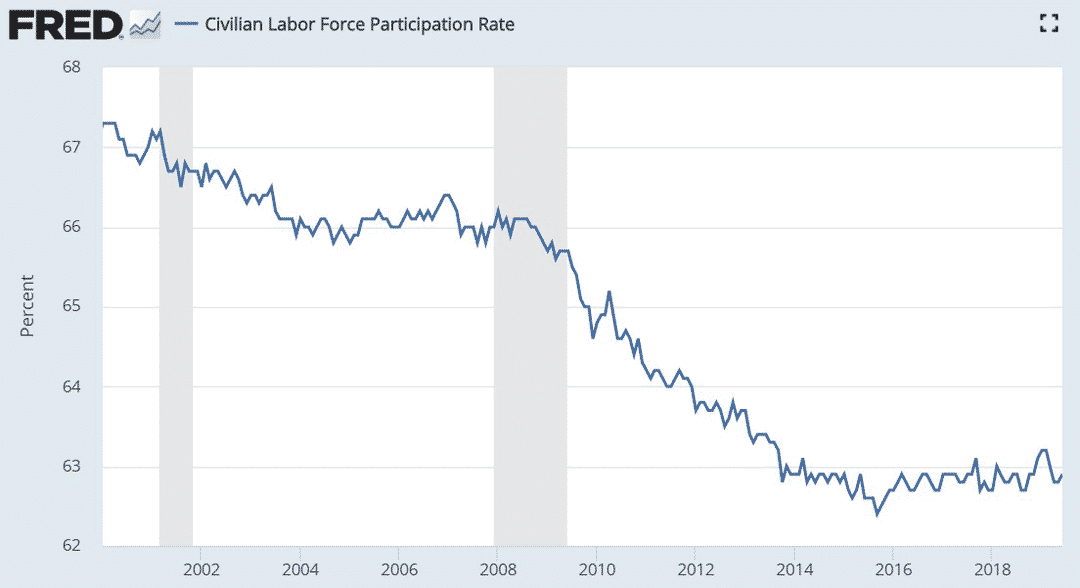 While the official unemployment rate is 3.7 percent, this figure excludes people who would like a job but are not currently looking for one, including people who are so discouraged by not being able to find a job that they have given up looking. When these people are included, the unemployment rate, by official measure, remains at 7.2 percent.

The low labor force participation rate coupled with the unspectacular real rate of unemployment are good indications that something is structurally wrong with the economy today.

To further bolster his assertion that the economy is doing fine, Irwin says that “overall growth for the quarter that just ended looks likely to be comfortably in positive territory” and that “American consumers keep spending money”.

But official measures showed “growth” also before the recession that began in the fourth quarter of 2007, following the collapse of the housing bubble. The logical syllogism presented—that since there is “growth” occurring by official measures, therefore the economy is doing fine—is a patently obvious non sequitur fallacy (a conclusion that does not follow from the premise).

Likewise, it does not follow from the fact that American consumers are spending a lot of money that therefore the economy is doing fine. This, too, seems an obvious lesson from the last recession, but the idea that spending is what fuels economic growth is pervasive in mainstream economic thinking, i.e., Keynesianism (a school of thought built upon the theories of British economist John Maynard Keynes).

As the housing bubble should have taught us, the nature of the spending matters. What creates economic growth is the investment of capital into advancing means of production, thus enabling businesses to provide better goods and services for lower prices. Real economic growth means a societal increase in standard of living.

But when the Fed pushes interest rates below where they otherwise would be if determined by the free market—rather than by a government-legislated private monopoly over the currency supply—it harmfully distorts the economy by creating the illusion that savings rates are high and that there’s thus a large supply of capital available for borrowing and investment.

But that large pool of capital isn’t really there. Consumers, investors, and entrepreneurs borrow and spend money on things they wouldn’t direct resources toward if rates were determined by supply and demand rather than by fiat.

The Fed’s low interest rate policy is an inflationary monetary policy. The mechanism by which the Fed pushes rates down is the purchasing of assets—primarily US debt backed by the blood, sweat, and tears of American taxpayers—with US dollars created out of thin air and backed by nothing of real value.

On the mistaken presumption of a fundamentally sound economy, here’s how the Times explains the Fed’s projected plan to devalue the dollar by engaging in more legalized counterfeiting:

The Fed is grappling with the reality that its actions can ripple through the world economy in ways that create powerful feedback loops that endanger the domestic economy.

At times in the last several years, traditional measures of the American economy suggested that it was reaching full health and that interest rate increases might be justified to prevent inflation. But when the Fed’s policies diverge too much from those of its counterparts around the world, it causes the dollar to rise, financial conditions to seize up and overseas economies to slow, in turn endangering the United States economy.

In other words, the Fed is going to engage in more legalized counterfeiting because that’s what other central banks are doing.

But the problem isn’t that it’s bad to allow the dollar to gain in value relative to other currencies. After all, a stronger dollar means an increase in purchasing power, and what consumer wouldn’t like being able to buy more stuff with fewer dollars?

The real problems are very different. For one, if interest rates rise too much, the US government will find it difficult to finance its enormous debt.

For another, consider again the housing bubble. Since the “growth” in the housing market was based upon artificially low interest rates rather than sound economic fundamentals, the bust was inevitable. In response to the recession precipitated by that bust, the Fed massively inflated, quadrupling the base money supply—upon which other banks may expand through the magic of fractional reserve banking and the creation of dollars out of thin air. 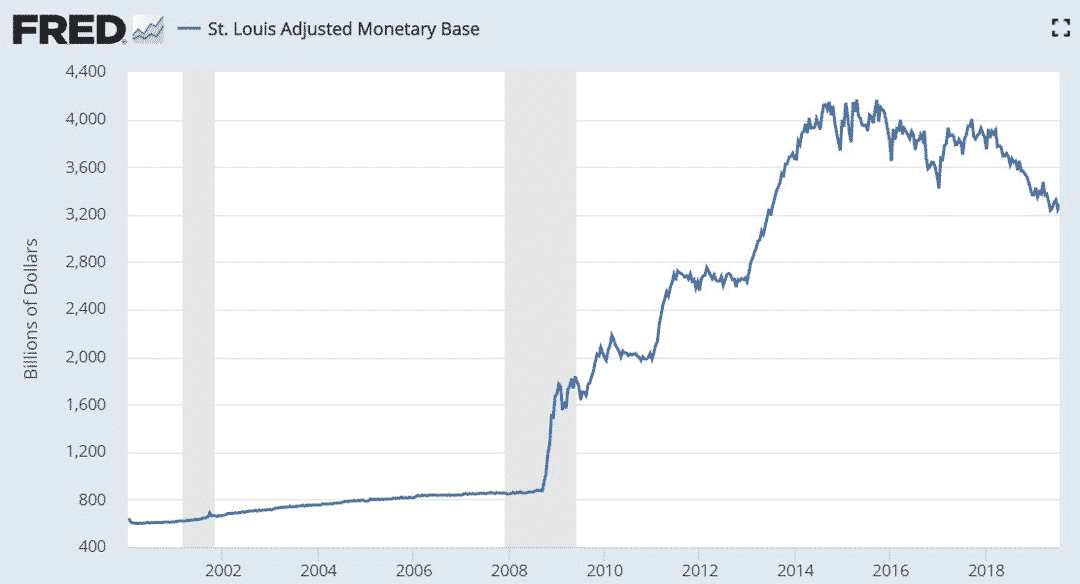 In other words, the Fed responded to the last recession by doing even more of the same as what caused it, only on an even greater scale.

What mainstream economists seem incapable of comprehending is that wealth does not come from a printing press.

Among the relatively few commentators who knew better and was warning against the coming bust was Peter Schiff, CEO of Euro Pacific Capital Inc. Here’s how he recently described the US economy:

It’s a bubble. Powell doesn’t seem to understand that. He seems to think the economy is doing OK. It’s not. The economy today is in worse shape than it was before it collapsed in 2008. The Fed inflated a much bigger bubble this time than it did last time. And yes, the longer we succeed in kicking the can down the road, the greater the imbalances grow as a result of this bubble, and the more painful it is when the air comes out. And that’s what’s going to happen.

It might be wise to listen this time to those who understand how the Fed’s manipulation of interest rates distorts the economy, rather than those who succumb to the fallacies of Keynesianism, a school of thought favored by the political establishment because it breeds a class of technocrats who serve to manufacture public consent for the existence of central banking, which in turn serves the interests of the politically and financially elite at the expense of everyone else in society.