Michael B. Oren and Israeli Hasbara

Michael Oren, Israel’s ambassador to the U.S., had an op-ed in the Wall Street Journal this week with a headline asking “What Happened to Israel’s Reputation?” 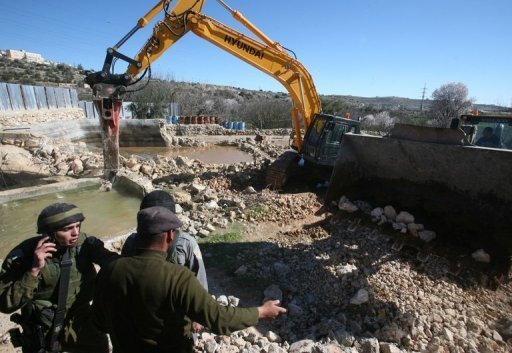 Michael Oren, Israel’s ambassador to the U.S., had an op-ed in the Wall Street Journal this week with a headline asking “What Happened to Israel’s Reputation?” He repeats many of his standard hasbara, much of which I addressed in my article “Michael B. Oren’s Worship of ‘Israel’s Resilient Democracy’” last month and won’t repeat here, to arrive at the conclusion that “The answer lies in the systematic delegitimization of the Jewish state. Having failed to destroy Israel by conventional arms and terrorism, Israel’s enemies alit on a subtler and more sinister tactic that hampers Israel’s ability to defend itself, even to justify its existence.”

Oren first argument is to deny that “Israel today is a Middle Eastern power that threatens its neighbors” and trying vainly to make Israel sound like the underdog, not Israel the “Goliath”, but Israel the “David”. Israel is “David” and Gaza militants the “Goliath” because the latter have rockets. Of course, Israel has much more sophisticated weaponry, such as missiles, bombs, tanks, helicopters, jets, and nuclear weapons. Gazan militants don’t. Israel actually has an army, and a navy, and an air force.  Palestinians don’t. But never mind, Israel is “David”, goddamit, not “Goliath”! And if Qassam rockets aren’t enough to convince you, consider that Iran “regularly pledges to wipe Israel off the map” and “is developing nuclear weapons.” Never mind that the former claim is a lie and there is no evidence for the latter. Israel is “David”, goddamit!

Of course, Israel only ever “has acted in self-defense”, and “Few countries have fought with clearer justification, fewer still with greater restraint, and none with a lower civilian-to-militant casualty ratio.” I mean, just look at Operation Cast Lead, from December 27, 2008 to January 18, 2009, in which Israel killed 1,387 Palestinians, according to Israeli human rights organization B’Tselem, of which at least 773 were not participating in hostilities. With only 330 of those killed having been combatants, that’s more than twice as many civilians killed as militants, including 107 women and 320 children. But nobody does a better job of preventing civilian casualties than Israel, goddamit!  Israel is “David”, and you’d better believe it!

Aaron David Miller over at Foreign Policy isn’t buying Oren’s conclusion that “Israel’s image has eroded principally because of a dedicated campaign to delegitimize it.” Miller thinks that Israel’s actions actually have something to do with its “very bad PR” problem. But Israel’s actions fall last on Miller’s list of three things affecting Israel’s image.

Miller praises Oren as “a remarkably talented historian” and “astute analyst”. He’s not a shameless propagandist, goddamit, and even if you disagree with his conclusion, you must take his arguments seriously! Miller excuses Israel’s “contradictions, political expediency, hypocrisies, and self-justifying policies” on the grounds that this is just part of “being normal”, of “acting like a normal state”. It’s perfectly “normal” for states to act with hypocrisy, as the example of the U.S. illustrates: “Israel’s loyal ally, the United States, operates in that world too”, Miller points out. Okay, he has a legitimate point there…

Miller next rejects Oren’s assertion that Israel is “David”. He does his readers the service of not insulting their intelligence by denying that Israel is “Goliath”. But his reason for doing so is because “There’s much truth in this image of Israeli might, and anyone who denies that capacity trivializes what the Israelis have accomplished and does them a grave disservice by portraying them as victims.” So, yes, it’s true, Israel is “Goliath”, not “David”, but this is a glorious accomplishment, in Miller’s mind.

Miller finally gets around to talking about Israel’s actions. Israel has a bad reputation in part because it is just misunderstood. Israel is “roundly and unfairly criticized” for “legitimate expressions of Israel’s real security needs”. Miller cites as an example Israel’s 1981 attack on the Iraq Osirak nuclear reactor. Never mind that this was an unambiguous act of aggression. Never mind that Iraq’s nuclear program was under the IAEA inspection regime and in compliance with the nuclear non-proliferation treaty. Never mind that this attack led Iraq to try to seek a nuclear deterrent to any further such Israeli attacks. Again, I’ve written about that before, such as here, here, and here, and won’t repeat the details, suffice to say Miller is full of shit trying to describe such Israeli aggression as somehow legitimate.

The second problem with Israel’s actions is that some of its policies “make little sense morally or strategically”. He cites the example of Israel’s settlements in the West Bank, which is contrary to the goal of “peace with the neighbors”. Somehow, the conclusion that stealing Palestinian land is a higher priority than peace escapes Miller, who does not bother to mention that Israel’s colonization efforts are illegal under international law. Gosh, could it be that Israel has an image problem because it perpetually violates international law? Miller doesn’t even begin to touch on such questions.

The third problem with Israel’s actions are that some of them are “dumb, arbitrary, or disproportionate in terms of loss of life”, including “policies that humiliate Palestinians, including collective punishment, housing demolitions, and so on.” Such policies may be “dumb”, but not “malevolent”, apparently, in Miller’s view. They are “arbitrary” rather than “deliberately cruel”. They are “disproportionate”, not “illegal” or “murderous”. In Miller’s final analysis, “Israel is a remarkable state that has sought to preserve its moral and ethical soul in a cruel and unforgiving world. But it is still only a nation of mortals trying to survive in that world.”

Could it be that Israel has a “PR problem” because of such actions as demolishing Palestinian homes or closing a Palestinian school to make way for a military training zone for Israeli soldiers, just to cite two examples from just this week?

Which really makes Miller a not-much-less-crude propagandist than Oren.