Juan Cole Censors Critical Comments on His Blog (in this case, on Obamacare)

How is one supposed to have a serious, intelligent discussion on such as serious topic as health care when you are not willing to engage people who don’t share your view?

Juan Cole posted the following image on his blog: 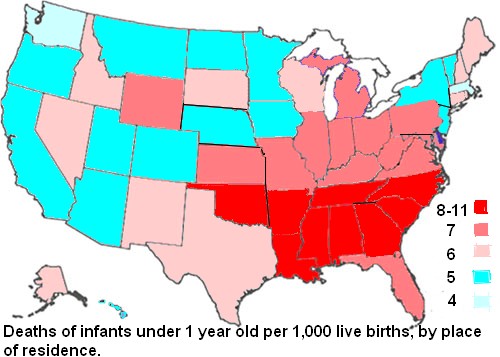 The post is titled “States with Highest Infant Mortality Rates most Opposed to Obamacare”. The image is accompanied by a link to the source for the data on infant mortality. That is it. He offered no comment. Now, I tried to image what his actual argument might be, and it seemed rather evident that it must be something along the lines of Paul Krugman’s argument that if you don’t support Obamacare, you are just a cruel, indecent, dishonest, sociopathic American. I was the first to leave a comment on Juan’s post, which was the following:

Is there actually supposed to be a point? States joining lawsuits against Obamacare include the following from your blue states: Nebraska, Utah, Colorado, North Dakota, Arizona; and from the pink: Idaho, Nevada, Texas, South Dakota, Wisconsin, and Maine. So what conclusions may we draw? Why, absolutely none! This is a ridiculous post.

When you post comments at his blog (as I had done several times previously) you will get a notice that your comment is awaiting moderation. I thought it curious why, with effective anti-spam plugins and such for blogging platforms, he would feel it necessary to moderate every comment, but, hey, that’s his right. Juan approved my comment and replied:

State officials opposed to expanding medicaid are not the same as general populations voting for the right wing, whose representatives promise to repeal the Affordable Care Act altogether. That’s not a pledge representatives of the blue states have made. Your attempt to muddy the waters is what is ridiculous.

I then submitted another comment, which I don’t recall word for word, but basically asking how I could muddy the waters when it was so unclear what his point was in the first place, and adding that what was ridiculous was the Supreme Court’s ruling that Obamacare is constitutional. I left the link for a 35-page paper I wrote systematically and completely destroying the Court’s arguments, illustrating the logical fallacies (and in one case outright fraud) therein.

I received the notification that my comment was awaiting moderation.

Juan declined to approve it. Comments of others left after I had submitted mine, not a critical voice among them, were approved.

Mr Hammond: what’s most ridiculous is the fact that the US is the only Western country not to have universal health care. It’s mind boggling really. It’s almost unfathomable that you haven’t evolved farther socially.

Washington D.C. has the nations highest infant mortality rate at 12.8 per 1000 link to statehealthfacts.org
They must really be opposed

To which Juan replied:

The high infant mortality rates are mainly a result of the economic marginalization of minorities, and opposition to Obamacare is opposition to spending public monies on righting this wrong. If Washington, DC’s local government were dominated, as in Alabama or South Carolina, by white oligarchs, it would be opposed.

I note that the State of Washington and the Commonwealth of Massachusetts have the lowest infant mortality rates at No.1 and No.2 respectively. I wonder if Romneycare has anything to do with Massachusetts’ low rate.

To which Juan replied:

After reading these comments, I tried to post another, which I kept a copy of this time (just in case):

Juan Cole, I don’t see how I could “muddy the waters” any further when you didn’t answer my question of what conclusion you think we may draw from the infant mortality data. Please tell us what you are trying to infer. That southerners are racists? That they don’t care about infants? That they don’t want minorities to receive health care? Please do explain.

Jan Karklsson, are you referring to my person or my country as not having evolved socially? Either way, I don’t agree that the Affordable Care Act represents social evolution. On the contrary, inasmuch as the individual mandate is unconstitutional, and inasmuch as government intereference in the market for health care and in contracts is the reason health care is so unaffordable in the first place, it is a step backwards.

Grandmere Mimi, you ask whether Romneycare could explain Massachusetts low infant mortality rate. The answer is “no”, for the obvious reason that the above data is from 2005 and the Massachusetts health care insurance reform law wasn’t enacted until 2006. One could also just as well ask whether not having something like Romneycare has anything to do with Washington’s low rate of infant mortality.

This time, the comment simply disappeared. Rather than appearing on the page with the notification that it is awaiting moderation, it simply vanished. I repasted it and submitted it once more. Same result.

Now, I thought, well, this could very well be just some glitch with Juan’s site. Yesterday, trying to access some of his posts returned a 404 error page. Stuff like this just happens sometimes. On the other hand, considering the fact that he had already censored one of my comments, it wouldn’t surprise me if Juan had banned me from commenting on his blog. I tried a third time using a different e-mail address, and got the same result. So unless he actually banned my username (“Jeremy R. Hammond”), it seems like it’s just a glitch in the system. I’ll give Juan the benefit of the doubt and assume so. Perhaps it did actually go through, and perhaps he may later approve it.

However, what remains certain is that Juan censored my second comment. This would seem to explain why he feels it necessary to personally moderate every comment that appears on his blog.

I used to respect Juan as an anti-war voice, back when Bush was president. But since Obama became president, he is just like any other commentator. He’s right there on the bandwagon. As I’ve observed previously:

Juan Cole jumped on the “Green Revolution” propaganda bandwagon in 2009 with the claim that Mahmoud Ahmadinejad stole the presidential election, despite the fact that all indications were that he legitimately won. He cheered on NATO’s illegal regime-change military operation in Libya. He has also been dutifully towing the line on Syria.

It’s difficult to continue to have respect for a person who so clearly is critical of U.S. foreign policy only along partisan lines, and who chooses to stifle criticism on his blog by censoring comments.

And how is one supposed to have a serious, intelligent discussion on such as serious topic as health care when you are not willing to engage people who don’t share your view or even let their views be heard on your blog?

Is it good enough to just state (like Krugman) or infer (like Cole) that anyone who opposes Obamacare is just an uncaring, horrible person? Are such ad hominem arguments, whether explicit or implicit, what constitute reasonable debate these days?

For my part, if you don’t like this post, and if you don’t agree with my views of Obamacare, you are welcome to leave your comment below. It will be automatically filtered for spam (hint: don’t leave a huge number of links and keep it relevant) and, assuming it isn’t sent to the spam folder, will appear immediately (caveat: this is usually true, although I use page caching to reduce page load time and there is sometimes a delay as a result). So long as you keep it respectful and don’t engage in personal attacks (don’t be a troll), you are most welcome to share your views with me.