The Predictable Rising Costs of Premiums Under Obamacare

Under the Patient Protection and Affordable Care Act, a.k.a. Obamacare, young people will be forced to pay higher premiums for health insurance.

CNN Money points out that under the Patient Protection and Affordable Care Act, a.k.a. Obamacare, young people will be forced to pay higher premiums for health insurance:

But some people, particularly young men who aren’t insured through their employers, could see their premiums go up once coverage in the state-based insurance exchanges begins in January.

…One key provision is that those with pre-existing conditions cannot be excluded or charged more for coverage. Until now, many cancer survivors, heart attack sufferers and those with other ailments have found it tough to get insurance. The new rule is great for those who have been sick, since they can now obtain more affordable plans, but it is likely to make things more expensive for the healthy people who get insurance by raising the overall cost of coverage.

…Older Americans, who tend to be sicker, will likely see their premiums go down, because they will now be mixed into a risk pool with younger, healthier people.

…”Younger people will have to offset costs of those who are older,” said Robert Zirkelbach, spokesman for America’s Health Insurance Plans, a lobbying group for insurers.

There are some other perverse effects, as well:

Currently insurers can charge premiums based on gender. Men usually pay less than women, since they typically visit the doctor less frequently. The Affordable Care Act, however, doesn’t allow insurers to charge different rates to men and women.

This isn’t news. What I want to emphasize here is the fact that forcing young, healthy people who require little or no health care are forced under Obamacare to subsidize the costs of others who require more care is not some unintended consequence. This is the purpose of Obamacare. It was designed this way.

From the Supreme Court’s ruling on the Act:

The mandate primarily affects healthy, often young adults who are less likely to need significant health care and have other priorities for spending their money. It is precisely because these individuals, as an actuarial class, incur relatively low health care costs that the mandate helps counter the effect of forcing insurance companies to cover others who impose greater costs than their premiums are allowed to reflect.

As I commented in my paper illustrating the preposterous, Alice-In-Wonderland-ish logical flaws of the Supreme Court’s ruling that the individual mandate under Obamacare is constitutional:

It is important to emphasize the Court’s explicit recognition of the fact that the purpose of the mandate is to subsidize the costs of insurance premiums for unhealthy individuals by forcing healthy individuals who are on the whole financially better off without it to purchase an insurance policy. The Act does nothing to solve the problem of Americans choosing unhealthy lifestyles; on the contrary, its incentives are perversely contrary to that goal. Rather, it rewards people for doing so while individuals who eat a healthful diet and otherwise make healthy lifestyle choices are penalized by making them pay for the health care costs of their fellow Americans who choose less wisely. This is not to say that choosing a healthy lifestyle can guarantee one will never require health care, and there are certainly times when care is needed for unexpected illnesses or injuries that are no fault of an individual’s lifestyle choices. Nevertheless, the choice of many Americans to live unhealthy lifestyles, as the Court points out, contributes significantly to the problem of the high costs of health care. Despite its name, the Affordable Care Act does nothing to address such underlying causes of unaffordable care. With it, Congress set out from the beginning only to deal with one of the symptoms—namely, high insurance premiums—and did so in a manner that they recognized would only exacerbate the problem, thus making it “necessary” to enact the individual mandate.

Or, as I’ve summarized it elsewhere:

Of course, “supposed to” is a key caveat there. But that Obamacare will have the unintended consequence of doing just the opposite and increasing premium costs should also be completely unsurprising.

After all, to cite just one obvious example of how this is a perhaps unintended but nevertheless perfectly predictable consequence,  if people who previously didn’t require health care are going to be forced to pay for it, they are going to want to use it, meaning more doctor visits for things they would otherwise forego if they had to pay out of pocket. Which means increased demand for services, while the supply of doctors remains the same. Simple supply and demand. Obamacare increases demand for health care and thus will result in higher costs for its consumers in the form of rising insurance premiums.

Here’s another example of how the government has created the very problems its legislation is purportedly designed to solve:

In fact, John C. Goodman points out in this paper inHealth Affairs,

In the main, insurance obtained through an employer is not portable, whereas insurance purchased by individuals is. Strangely, the tax law heavily subsidizes the former while giving very little tax relief to the latter….

If health insurance portability is desirable and if the tax law favors employer purchase, why don’t employers purchase individually owned (and therefore portable) insurance for their employees? The answer: Federal law makes this impossible, or at least impractical.

In his book, Priceless: Curing the Healthcare Crisis, Goodman writes:

In almost every state, employers are not allowed to buy the kind of insurance employees own and can take with them from job to job and in and out of the labor market. That prohibition needs to be rescinded. Most of the time, the problem of pre-existing conditions arises precisely because health insurance isn’t portable.

So we have a problem where federal law exacerbates the problem whereby people who change jobs lose their insurance coverage and, if they have developed a medical condition since they were hired at the first job, now have a “pre-existing condition” and cannot get coverage. But instead of fixing that problem, the Patient Protection and Affordable Care Act (ACA, a.k.a., “Obamacare”) simply decided to dictate to insurance companies that they must accept everyone, regardless of pre-existing conditions, which defeats the whole purpose of insurance. Imagine if the government was to dictate to fire insurance companies that they must provide coverage to people whose homes have already burned down.

This policy, of course, has unintended but predictable consequences. It incentivizes people to not purchase an insurance policy unless and until they get sick and forces insurers to raise premiums on everybody to cover the additional costs—precisely the opposite of the government’s ostensible goal of lowering costs and insuring more people. So what was the bureaucrats’ solution to the very problem they created with all their legislative bungling? Why, the individual mandate, of course! Which happens to be unconstitutional. But never mind that.

I’ve commented on this at more length here:

That means that Obamacare actually creates the very problem it is ostensibly designed to solve.

The point bears repeating, but don’t take it from me. Here’s the Supreme Court (emphasis added):

In the Affordable Care Act, Congress addressed the problem of those who cannot obtain insurance coverage because of preexisting conditions or other health issues. It did so through the Act’s “guaranteed-issue” and “community-rating” provisions. These provisions together prohibit insurance companies from denying coverage to those with such conditions or charging unhealthy individuals higher premiums than healthy individuals….

The guaranteed-issue and community-rating reforms do not, however, address the issue of healthy individuals who choose not to purchase insurance to cover potential health care needs. In fact, the reforms sharply exacerbate that problem, by providing an incentive for individuals to delay purchasing health insurance until they become sick, relying on the promise of guaranteed and affordable coverage.The reforms also threaten to impose massive new costs on insurers, who are required to accept unhealthy individuals but prohibited from charging them rates necessary to pay for their coverage. This will lead insurers to significantly increase premiums on everyone….

The individual mandate was Congress’s solution to these problems.

In other words, the recognized predictable effect of Obamacare’s increased regulations for the insurance industry would be to actually to increase the costs of buying insurance—the very opposite consequence we are told these regulations are designed to produce, and the Congress’s solution to the problem their own regulations exacerbated is to force people to buy insurance who otherwise would choose not to because their premiums would be higher than their expected health care costs, thus effectively replacing the problem of subsidization of health care costs of lower-income uninsured people by higher-income insured people with the subsidization of health care costs of unhealthy people by healthy individuals. 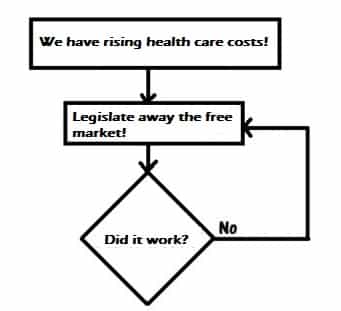 President Obama’s promise that premiums would decrease by $2,500 has been broken. Since 2008, the average family premium has instead grown by over $3,000. Even more shocking is that these increases occurred before Obamacare’s most costly requirements go into effect in 2014….

Obamacare will significantly increase premiums…. By how much will remain unknown until plan rates are submitted. However, we do have projections on what to expect in 2014.   Some estimates show some Americans facing startling premium increases of 203 percent because of the law. A study by actuarial firm Oliver Wyman suggests premiums in the individual market will increase an average of 40 percent. The Society of Actuaries similarly estimates an average premium increase of 32 percent in the individual market….

Higher health care premiums are the last thing single young adults and working families can afford. Yet contrary to what the president promised, that is exactly what Obamacare is projected to do….

Despite the availability of $1 trillion in subsidies, Americans across the country will still pay a higher premium in 2014 as a result of Obamacare. In fact, households earning as little as $46,000 will receive no premium assistance, yet they will be forced to accept unaffordable premium increases as a result of Obamacare’s mandates and regulations nonetheless.  Even after receiving subsidies, Americans earning as little as $25,000 will still pay more….

In the case of young adults, the premium spike will be even more painful….

The estimated average increase in premium costs for young people in the small group market is 145% and in the individual market 189%. The report concludes:

Taking into account empirical evidence from past state-level experiences, as well as future projections, upon implementation Obamacare will make coverage dramatically more expensive and unaffordable for individuals and families.