War on Syria: An Example of How Presstitutes Are Rewarded for Manufacturing Consent for US Policy

What better way to get access as a journalist to interview a high-level official than to openly declare your support for government policy?

In a previous post, I pointed out how a writer for TIME magazine willfully lies in an attempt to make readers mistakenly believe that they are in the minority among Americans if they oppose war on Syria. As I wrote of the reporter, Zeke J. Miller,

Miller probably has a bright career ahead of him. He knows how to play the game to get ahead. He knows that leaving the job of actual journalism and instead becoming a hack for the establishment will get him places. He understands that joining the priesthood for the state religion and playing the role of propagandist to manufacture consent for criminal U.S. foreign policies might open doors for him that being a real journalist and reporting the truth just would not.

An example of this is Nicholas D. Kristof. I pointed out earlier how he was repeating the standard propaganda narrative for war on Syria and also how his argument for war meets Einstein’s definition of “insanity”. Why do so-called “journalists” presstitute themselves this way? Going to the State Department’s website just now, I notice the following displayed prominently on the front page: 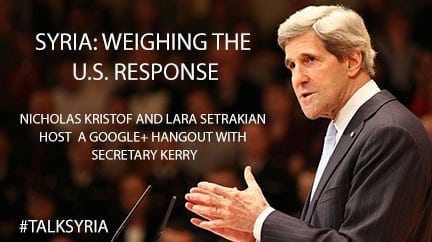 What better way to get access as a journalist to interview a high-level official than to openly declare your support for government policy? Kristof is a natural choice for the State Department. Don’t expect any hard-hitting questions from this interviewer.