Paul Krugman on Spain’s Economic Woes: It Doesn’t Matter Where Capital Is Directed, So Long As There Is Spending!

Nothing "structural" at all to see here. Move along. Just keep spending...

Paul Krugman writes that officials “all too often” when assessing what to do about a recession “interpret the slump as ‘structural’, something that can be fixed only through painful reforms (which, when unemployment fails to fall, will be dismissed as just not enough) rather than as a shortfall in demand.”

In other words, the problem isn’t that capital has been misdirected such that now the economy needs to restructure by redirecting capital from those areas where malinvestment has occurred back towards sustainable productive ends. It’s just that people aren’t spending enough money.

He takes Spain as an example, arguing that Spain’s problems aren’t “structural”, there just isn’t enough consumer demand; that is, people just aren’t spending enough. And since people aren’t spending, employers have no reason to hire, so unemployment remains a problem. Now, if the central banks would just print more money and push interest rates down, which would incentivize more borrowing and spending.

He concludes that, “given 2 percent inflation or a bit higher, Spain ought to be able to have an unemployment rate around 15 percent, or 10 percent lower than where it is now. That’s a lot of unnecessary unemployment.”

This made me curious about Spain’s inflation, so I Googled it. Turns out, Spains historic inflation looks like this: 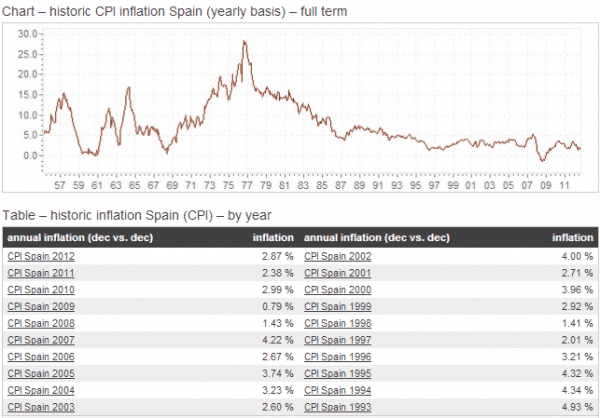 Remember that Spain had its own housing bubble. When Krugman says the resulting unemployment isn’t due to “structural” problems in the economy, but lack of demand, he is saying that it doesn’t matter where capital is directed or how money is spent, just so long as people spend. Now, I don’t know much about Spain’s economy, but I took 15 seconds to Google Spain’s housing bubble, found and found this, which linked to this from earlier this year (pictures included, as they’re worth 1,000 words): 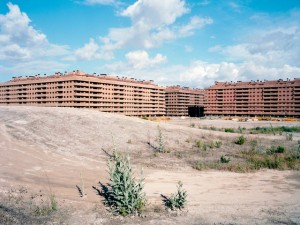 Spain’s zombie developers are finally about to die.

Spanish banks are pulling the plug on thousands of builders kept alive during the past five years even as they built almost nothing, said Mikel Echavarren, chief executive officer of Irea, a Madrid-based consulting firm that has advised on 22 billion euros ($28.5 billion) of refinancing. The banks, forced by the government last year to set aside provisions for the developers, have no incentive to keep funding them.

“Banks have taken the hit, so extend and pretend is over,” said Echavarren. “There’s no motivation to refinance companies that aren’t viable, have no liquidity or possibility of future earnings so we’ll see a tsunami of developer bankruptcies in the next two years.” 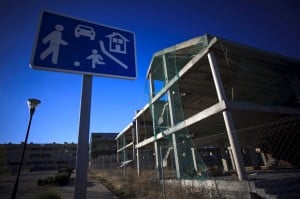 The final collapse of an industry that accounted for as much as 18 percent of Spain’s growth amid the country’s decade-long real estate boom will add to unemployment, already at a record 26 percent, depress consumer spending needed to turn around the economy and push down the value of residential real estate that’s already dropped more than 30 percent since 2007, said Raj Badiani, an economist at IHS Global Insight in London.

While job losses in the construction industry continued in recent quarters, “they’ve been less severe than expected, given the scale of the real estate slump,” said Badiani. “With banks cutting financial life support to many developers living on borrowed time, we can expect an accelerated downward adjustment in employment levels.” Badiani estimates the jobless rate could climb to more than 27 percent this year and house prices will fall at least 50 percent from the peak by 2015.

More than half of the country’s 67,000 developers can be categorized as “zombies,” with liabilities that exceed their assets and only enough income to repay the interest on their loans, according to R.R. de Acuna & Asociados, a real-estate consulting firm….

Spanish lenders, ordered last year to set aside provisions of 84 billion euros to cover anticipated real estate losses, have no incentive to keep unviable builders afloat after they’ve accounted for losses from 280 billion euros of their loans, according to Irea.

Only developers with sufficient rental income from commercial property to repay debt or those still building homes in areas where they can be sold at a profit will survive, said Echavarren, who estimates that between 5 percent and 10 percent of Spanish developers fall into those categories.

Since 2008, more than 19,000 real estate and construction companies, or 14 percent of the total, have gone out of business, according to Iberinform, a unit of credit insurer Credito y Caucion….

Spain built 675,000 homes a year from 1997 to 2006, according to a report by a unit of Spanish savings bank Cajamar. That’s more than France, Germany and the U.K. combined. The frenzy resulted in a surplus of about 2 million empty homes that will take between seven and 13 years to absorb, according to Madrid-based property research firm R.R. de Acuna & Asociados….

“Mortgage lending and demand for homes will never recover to the highs we saw,” said Juan Villen, head of mortgages for Idealista.com, Spain’s largest property website. “A few years ago an influx of immigrants and buoyant employment among Spaniards fuelled home sales, now everyone is leaving Spain and those left are unemployed or scared that they might become so.”

…The ruling PP Party, which took over in December 2011, passed a decree in February 2012 requiring banks to speed up recognition of losses on real estate by boosting provisions set aside for land to 80 percent from 31 percent and for unfinished developments to 65 percent from 27 percent. A second decree in May forced lenders to set aside more money for real estate loans classed as healthy.

Etcetera. But remember, according to Krugman, the problem isn’t that capital was misdirected into areas where it shouldn’t have been, such as by artificially low interest rates or government interference like forcing banks to continue lending for real estate development, presumably in an attempt to reflate the housing bubble, when there had already been fare more homes built during the bubble than there were people interested in living in them!

Nothing “structural” at all to see here. Move along. Just keep spending…