Debt Ceiling/Obamacare Debate: Neither Party Has the Interests of Americans at Heart

Each party is trying to "blackmail" the other. Neither has the interests of the American people at heart. 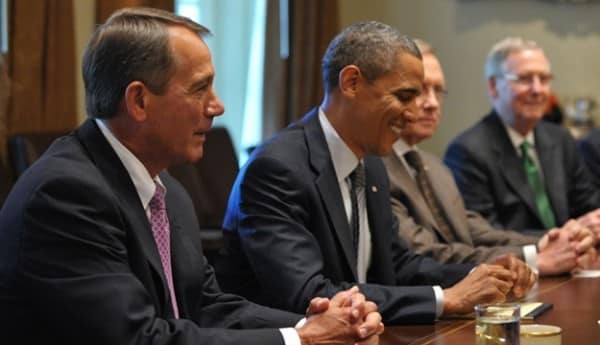 Criticizing the Republicans for trying to throw a wrench in the gears of the Affordable Care Act (Obamacare) by bluffing that they will let the U.S. default on its debt rather than raise the debt ceiling unless, unless the Act is defunded or elements postponed, Eduardo Porter writes in a NYT op-ed:

Nearly 6 in 10 Americans disapprove of trying to stop the law by cutting its financing. Even among those who don’t like the law, less than half want their representatives in Congress to try to make it fail.

conservative “experts” are creating false impressions about public opinion. Just after Kaiser released a poll showing a strong majority — 57 percent — opposed to the idea of defunding health reform, the Heritage Foundation put out a poster claiming that 57 percent of Americans want reform defunded. Did the experts at Heritage simply read the numbers upside down? No, they claimed, they were referring to some other poll. Whatever really happened, the practical effect was to delude the right-wing faithful.

As I pointed out, though:

One, the suggestion that Heritage was trying to “delude” people just assumes that the poll showing the number Krugman prefers (57% opposed to defunding Obamacare) is more accurate than the poll cited by Heritage. Thus, Krugman is here just unashamedly displaying his selection bias. (The Heritage poll asked: “Do you support or oppose de-funding, or removing the funding, from the Obama health care law?” The results were 56.6% who supported and 33.7% who opposed doing so.)

Two, even when we turn to the poll that gives the result Krugman prefers, we find that it in fact shows that only 37% of those surveyed had a favorable view of Obamacare compared to 42% who viewed it unfavorably.

The 57% figure Krugman refers to are the majority of Americans who, although they may be opposed to Obamacare, “say they disapprove of the idea of cutting off funding as a way to stop the law from being implemented” (emphasis added).

Remember what Krugman’s point is here: that people who hold a different view about Obamacare than Krugman does are trying to “delude” people by creating “false impressions about” what? About “public opinion” on Obamacare. And what does the very poll Krugman cites in an attempt to prove his point show? That more Americans view Obamacare unfavorably than favorably.

So, to sum up, the criticism from Democrats is true that Republicans are acting against the will of the public, but also hypocritical, since, after all, so are they.

Porter quotes the opinion of a Harvard political scientist about how stubborn Republicans are and how unwilling to consider the interests of the American people:

“They listen to nobody but themselves,” the Harvard political scientist Theda Skocpol told me. “They are convinced of their rectitude and convinced that they alone are qualified to save America from the dire threat of Obama and his polices.”

But of Democrats, we could also accurately criticize, “They listen to nobody but themselves. They are convinced of their rectitude and that they alone are qualified to save America through Obamacare. They have worked themselves into a dangerous place.”

Flawed though it may turn out to be, Obamacare, as the Affordable Care Act is popularly known, could fundamentally change the relationship between working Americans and their government. This could pose an existential threat to the small-government credo that has defined the G.O.P. for four decades.

Yes, indeed, when unconstitutional powers are usurped, such as unlawfully coercing individuals to participate in a market against their will under threat of penalty, it does tend to “change the relationship between Americans and their government.” This truly is “a dangerous place” for politicians to have worked themselves into — dangerous to the Liberty of every American. And this idea of Liberty poses an existential threat to the Big Government credo that defines the Democratic Party, which wants a government so big, and is so unwilling to meaningfully cut spending that they are willing to risk a default in no less a measure than the Republicans.

Each party is trying to “blackmail” the other. Neither has the interests of the American people at heart.