Paul Krugman's intellectual dishonesty is yet again on display in his column "Obamacare's Secret Success", in which he claims that the so-called Affordable Care Act (ACA) is responsible for the slowdown in the costs of health care.

Paul Krugman’s intellectual dishonesty is yet again on display in his column “Obamacare’s Secret Success“, in which he claims that the so-called Affordable Care Act (ACA) is responsible for the slowdown in the costs of health care. He writes:

The law establishing Obamacare was officially titled the Patient Protection and Affordable Care Act. And the “affordable” bit wasn’t just about subsidizing premiums. It was also supposed to be about “bending the curve” — slowing the seemingly inexorable rise in health costs….

So, how’s it going? The health exchanges are off to a famously rocky start, but many, though by no means all, of the cost-control measures have already kicked in. Has the curve been bent?

The answer, amazingly, is yes. In fact, the slowdown in health costs has been dramatic.

So, according to Krugman, “yes”, the ACA has been successful in “bending the curve”. Obamacare, according to Krugman, has been responsible for a “dramatic” slowdown in health costs. First of all, it’s important to understand that health care costs are still rising. It’s just that they are rising at a slower rate now than in the past. That understood, Krugman continues:

O.K., the obligatory caveats. First of all, we don’t know how long the good news will last. Health costs in the United States slowed dramatically in the 1990s (although not this dramatically), probably thanks to the rise of health maintenance organizations, but cost growth picked up again after 2000. Second, we don’t know for sure how much of the good news is because of the Affordable Care Act.

Still, the facts are striking. Since 2010, when the act was passed, real health spending per capita — that is, total spending adjusted for overall inflation and population growth — has risen less than a third as rapidly as its long-term average.

So, to review, according to Krugman, costs slowed in the ’90s, but “picked up again after 2000”. Then, in 2010, the “striking” thing occurred that health care spending had its “dramatic” slowdown — the “secret success” of Obamacare.

There’s just one really important little fact that Krugman left out. It is not the first time he has attempted to willfully deceive his readers into believing that the ACA has been responsible for the slowdown in health care costs (see here). Here’s a chart that illustrates the fact Krugman deceitfully omitted: 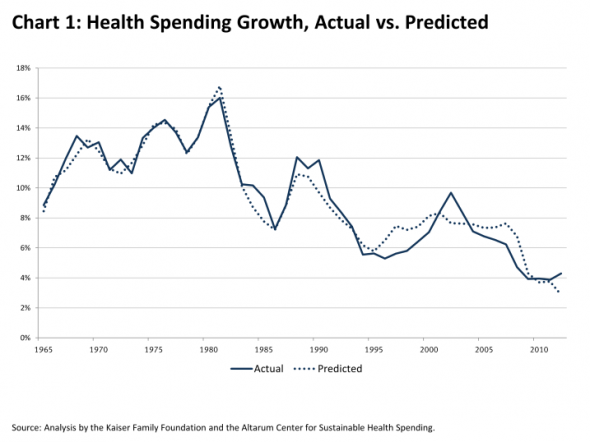 First of all, Krugman’s spending picked up during the Clinton administration and by 2000, when Bush took office, was already well into its increase, which then peaked in 2003 and has abated ever since. Needless to say, Obamacare has not been responsible for this slowing in the increase in health care costs. Note that according to the source of this graph, a Kaiser Family Foundation report, the ACA will cause an initial increase in the rate of health care spending. Here’s another closer look at the data: 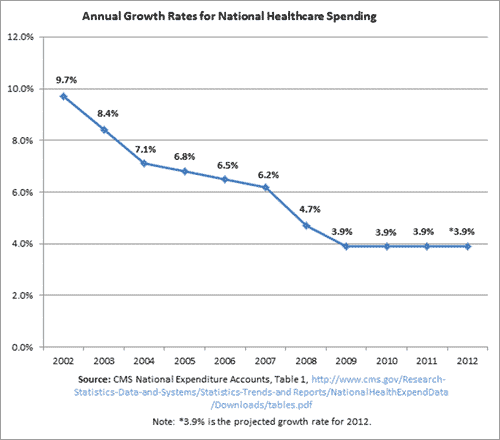 Can you see the decrease in health care spending there due to the ACA? Of course, not, because it doesn’t exist. As John C. Goodman notes:

Moreover, ObamaCare doesn’t really begin until this coming January. All the changes up to now have been cost increasing ― providing risk pool insurance to the uninsurable, forcing private plans to cover more benefits, and adding such extras to Medicare as free “wellness exams.”

So how does Krugman manage to give ObamaCare any credit for a slowdown in spending?

Good question. The Centers for Medicare and Medicaid Services (CMS) likewise projected in 2010 that there would be an initial increase in the growth of costs due to the ACA. In September of this year, CMS revised its projection to show slower growth than estimated in 2010. But it made clear that the reasons for this slower-than-expected growth were unrelated to the ACA, the effect of which was counter to the slowdown in costs.

Krugman could just read his own newspaper that he works for to learn that “Economists broadly agree that the sluggish economy remains the main reason that health spending has grown so slowly for the last half-decade,” that “the Affordable Care Act might be more a beneficiary of changes in health care spending than the primary driver of them”, and that, “To be sure, the Affordable Care Act will lead to a drastic bump in health spending by the government starting next year”.

Krugman’s repeated claims that the ACA has been responsible for the present slower rate of increase in the cost of health care is just another example of why he is a fraud and a hack who can’t be taken seriously.