Forget What You Think You Know about the Israel-Palestine Conflict

Empower yourself with the knowledge to become an effective voice for peace. 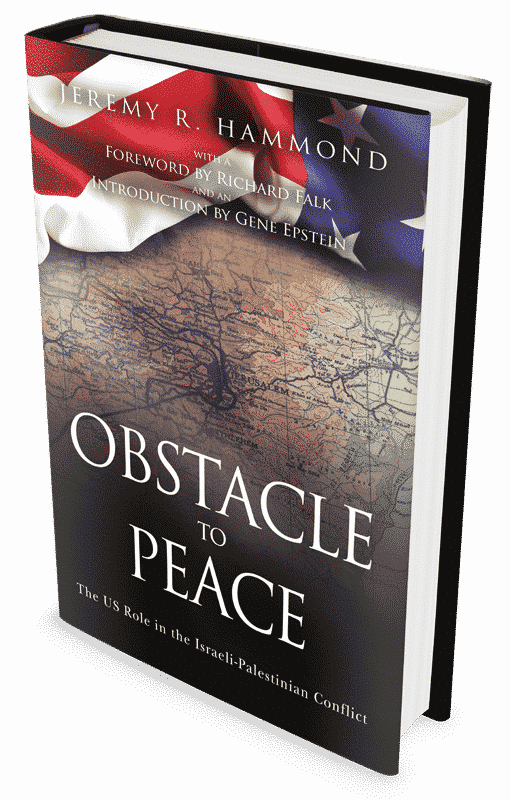 What is the root cause of the conflict between Israelis and Palestinans? Why has it persisted for so long? How can peace and justice finally be realized?

Obstacle to Peace not only provides the answers, but also explains why you won’t hear them from the US government or mainstream media.

For anyone seeking a better understanding of the conflict’s root causes, the true reasons for its persistence, and the way forward, Obstacle to Peace delivers the knowledge and insights to effect the paradigm shift required to achieve justice and peace in the Middle East.

Obstacle to Peace shatters mainstream propaganda narratives about the conflict, revealing the true reasons for its persistence and illuminating the path forward to a just resolution.

The Rise of Hamas in Gaza
^

Murder on the High Seas
^

Chapter 1: The Rise of Hamas in Gaza

In December 1987, a mass uprising of the Palestinian people began against the military occupation of their territory by the state of Israel that became known as the first “intifada”, an Arabic word meaning “throwing off”. In September 1988, the New York Times reported on “the first serious split of the nine-month-old Palestinian uprising”. The previous month, a new organization had published its charter. The group went by the name “Hamas”, an acronym for Harakat al-Muqawama al-Islamiya, or Islamic Resistance Movement, and it had quickly become “a major force in the Gaza Strip”. Hamas was critical of the Palestine Liberation Organization (PLO) and posed a threat to its secular leadership under Yasser Arafat. This was complicating efforts to pressure Arafat to negotiate a peace agreement with the occupying power.

Nevertheless, the Israeli government had “taken no direct action against Hamas”, which led to a belief among many Palestinians that Hamas was “being tolerated by the Israeli security forces in hopes of splitting the uprising”. This was a tactic, the Times noted, that Israel had used before. Reportedly, Israel had even funded Hamas’s parent organization, Mujama al-Islamiya, which was legally registered in Israel by Hamas founder Sheikh Ahmed Yassin nearly a decade before. The US State Department observed how “some Israeli occupation officials indicated that Hamas served as a useful counter to the secular organizations loyal to the PLO.” As a result, the US conceded, “Israeli forces may be turning a blind eye to Hamas activities”.

Hamas would go on to deserve its reputation as a terrorist organization. In April 1994, Hamas claimed responsibility for the first Palestinian suicide bombing, carried out in retaliation for the murder of twenty-nine Muslims in a mosque in Hebron by Baruch Goldstein, a Jewish settler armed with an assault rifle.

While it might at first seem inexplicable that Israel would lend its tacit support for Hamas’s rise, there is a logical explanation: the main problem confronting Israel was the threat of peace. The PLO had changed course, renouncing terrorism in favor of political engagement. It had dangerously joined the international consensus on the two-state solution for the Israeli-Palestinian conflict.

This international consensus is based on the principle of international law that it is inadmissible for a state to acquire territory by war. Consequently, Israel is required by law to withdraw from the territories occupied during the June 1967 “Six Day War”, which include the Palestinian territories of the West Bank and the Gaza Strip. In the aftermath of the 1967 war, this requirement was emphasized in United Nations Security Council Resolution 242, as well as numerous subsequent resolutions, including Resolution 338 (which called for a ceasefire to end the October 1973 Arab-Israeli war, or the Yom Kippur War, as it is known in Israel).

While initially it was presumed that the occupied West Bank and Gaza Strip would return to the states under whose administration they had previously been subject (Jordan and Egypt, respectively), in accordance with the right to self-determination explicitly recognized in the UN Charter, the consensus quickly evolved to envision the establishment of an independent Palestinian state alongside Israel on the basis of the pre-June 1967 boundaries (also known as the 1949 armistice lines, or the “Green Line” for the color in which it was drawn on the map), with minor and mutually agreed revisions to the final border.

The primary threat to Israel, given its goal of retaining as much of the occupied territory as politically feasible, was manifest on November 15, 1988, when the legislative body of the PLO, the Palestinian National Council (PNC), proclaimed the independent state of Palestine in Algiers, Algeria. The PNC attached a political communiqué to the declaration accepting UN Security Council Resolutions 242 and 338 as the basis for a peace settlement. “We totally and absolutely renounce all forms of terrorism”, Arafat declared the following month, “including individual, group and state terrorism.”

When Arafat was invited to address the General Assembly at the UN headquarters in New York City, the US refused to issue him a visa. So he was invited to address the Assembly instead from Geneva, Switzerland, where he called on the international community to stand by the Palestinian people in their struggle to exercise the right to self-determination, as well as to uphold the right of Arab refugees expelled from Palestine in 1948 to return to their homeland—rights rejected by Israel as contrary to both its colonial project in the occupied territories and its domestic character as a “Jewish state”. Arafat said that Palestine, for its part, was “a state which believes in the settlement of international and regional disputes by peaceful means in accordance with the charter and resolutions of the United Nations.” He again reiterated the PLO’s acceptance of Resolutions 242 and 338 as the basis for a peace agreement.

As a legal basis for its declaration of independence, the PLO also cited UN General Assembly Resolution 181 of November 29, 1947. The declaration characterized this resolution as having “partitioned Palestine”. In his address to the Assembly, Arafat described Resolution 181 as “the only birth certificate” for the state of Israel and reminded that it had called for the establishment of two states.

However, it must be emphasized that the popular claim that the UN created the state of Israel by partitioning Palestine is a myth.

“Hammond’s book breaks new ground in ways that fundamentally alter our understanding of the conflict and how to resolve it.”

Richard Falk, from the Foreword

“Jeremy Hammond’s carefully documented and highly informative study of how Washington has joined Israel in undermining the efforts to achieve a peaceful political settlement of the Israel-Palestine conflict is a welcome and timely contribution, and one that focuses directly on a salient issue, all too often evaded.”

“Given the intense focus and the passions aroused by the conflict it is rare to find a book or article that says something new but Jeremy Hammond’s Obstacle to Peace: The U.S. Role in the Israeli-Palestinian Conflict does just that, deconstructing the prevailing narrative on the Middle East while also explaining in meticulous and fully documented detail why and how a succession of United States administrations has actually become the greatest impediment to a just settlement that would benefit both Palestinians and Israelis….To my mind his book is essential reading on Israel-Palestine….”

“Everybody’s gotta read Obstacle to Peace: The US Role in the Israeli-Palestinian Conflict by Jeremy Hammond. It’s great! … It’s such an important book…. This is really the book I’ve been waiting for a long time to read.”

“In our days of darkness, spreading ignorance, and absence of serious debate in public forums, we can take hope from the fact that some scholars still produce serious and informative books on the most critical issues of our time. If in the future policymakers again seek the guidance of truth, they will have the information at hand. One such book of truth is Jeremy R. Hammond’s just published Obstacle to Peace, a closely reasoned, heavily documented (68 pages of footnotes), fully indexed, readable book….”

“Over the course of a book that is as meticulously detailed as it is readable, Jeremy Hammond explains how the US approach he correctly identifies as rejectionist is closing the door on peace in the Holy Land. We must learn the historical lessons Hammond outlines in Obstacle to Peace before that door is nailed shut for good.”

Max Blumenthal
Get the Book Now

The government perpetually lies to the public about important issues. The mainstream media dutifully serve to manufacture consent for criminal policies.

I free people’s minds by exposing state propaganda intended to keep them in servitude to the politically and financially powerful. My writings empower readers with the knowledge to see through the deceptions and fight for a better future, for ourselves, our children, and future generations of humanity. 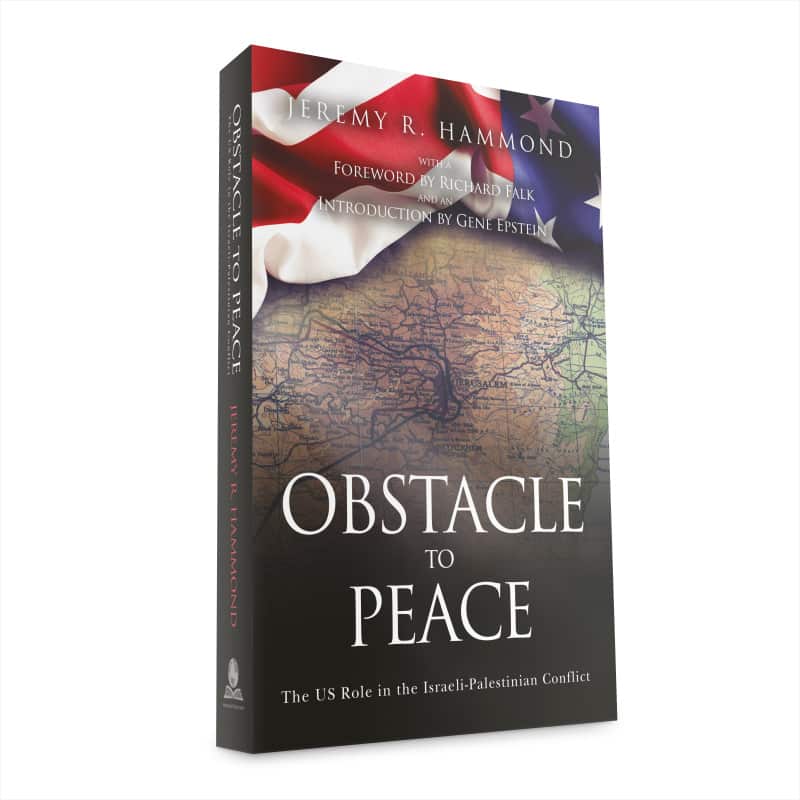 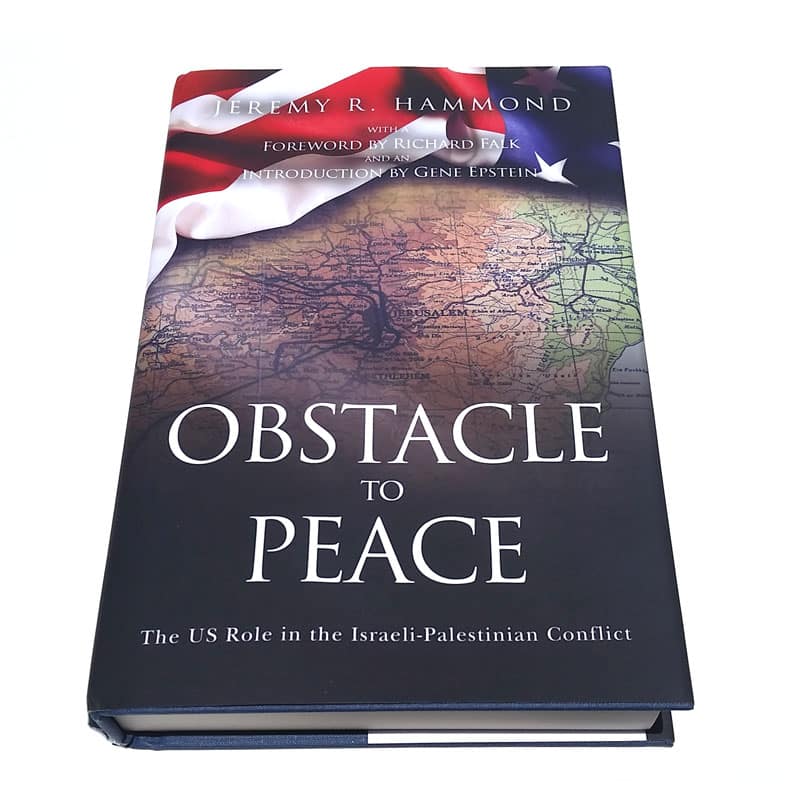 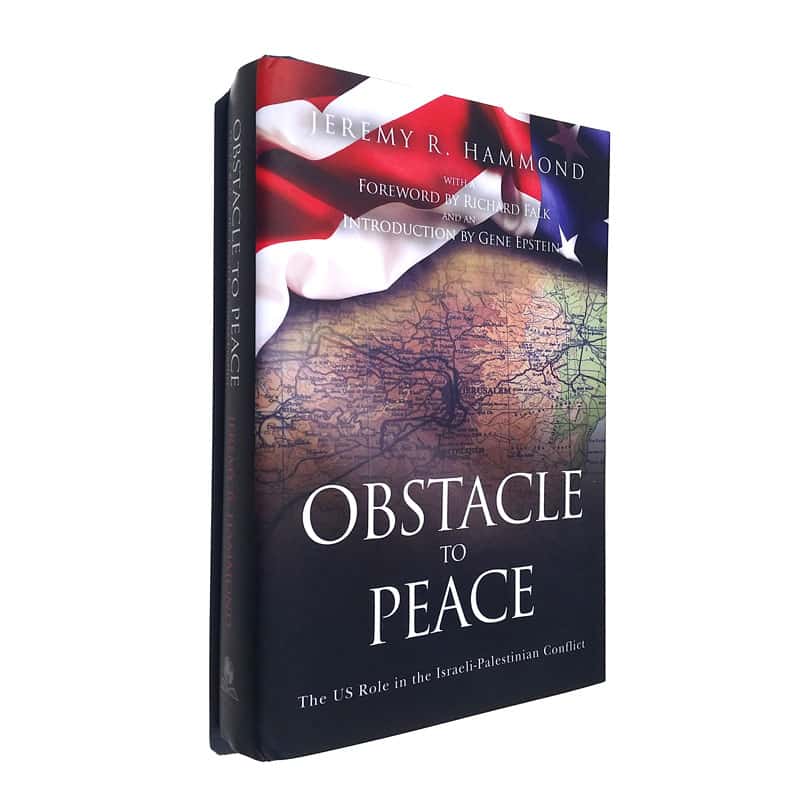 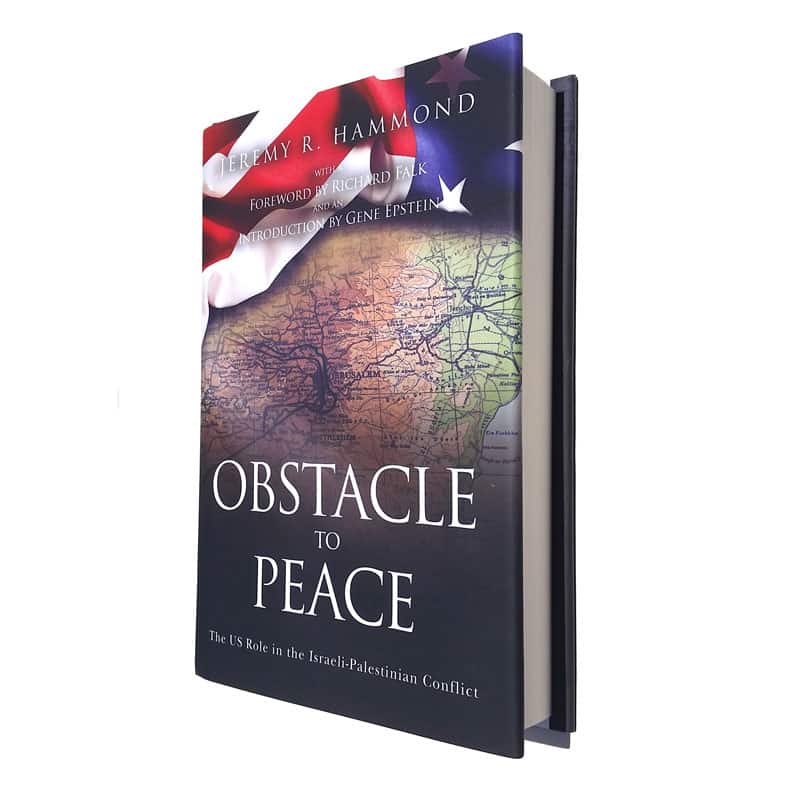 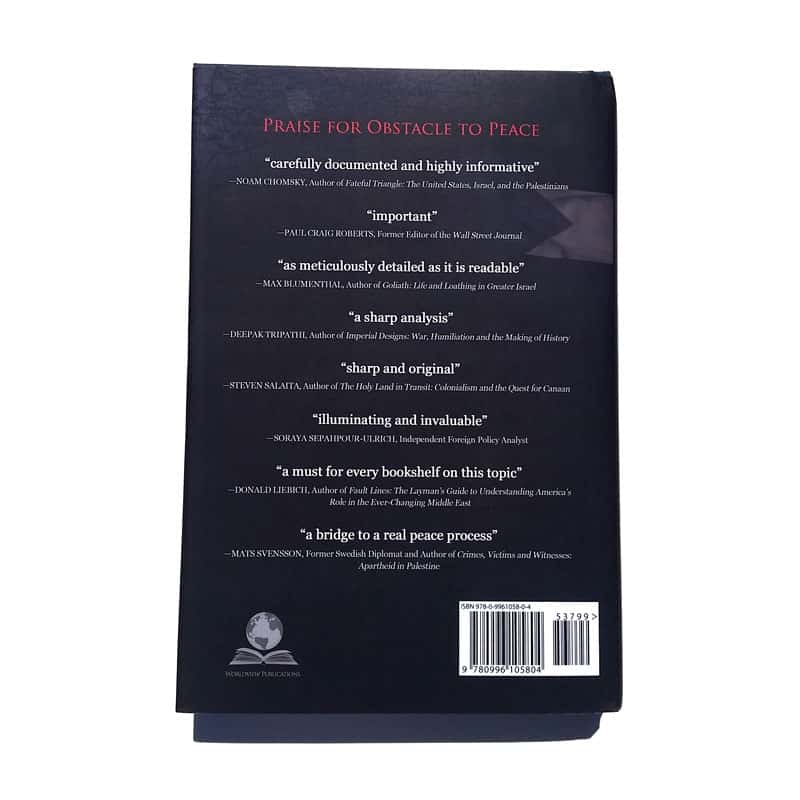 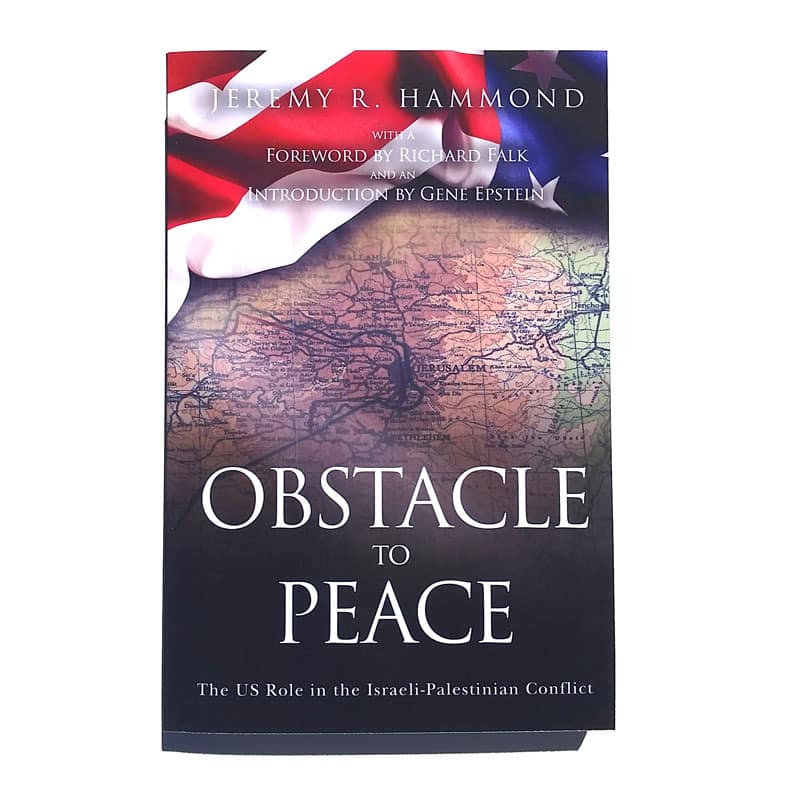 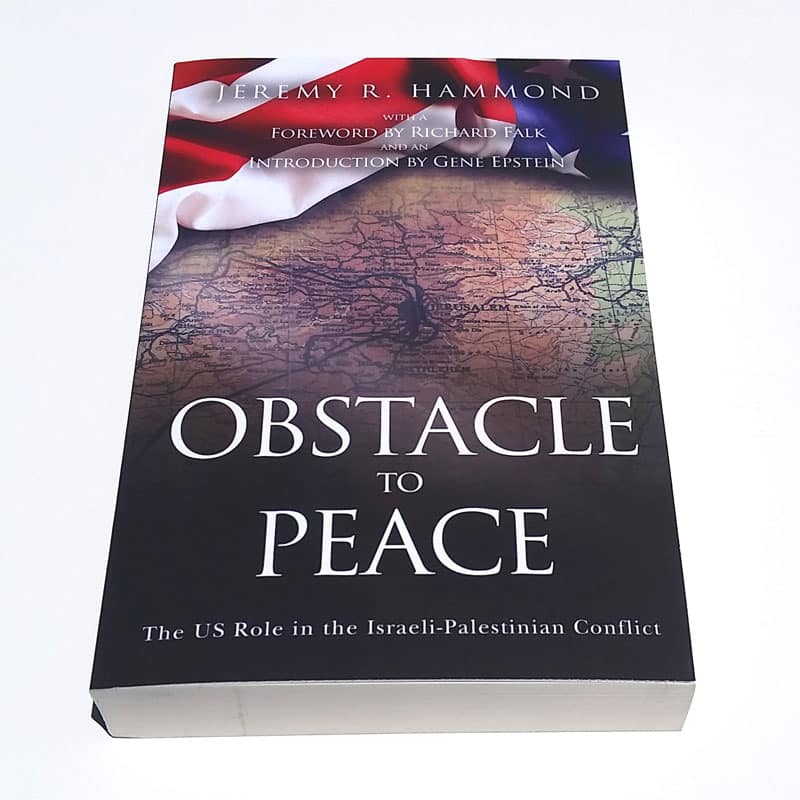 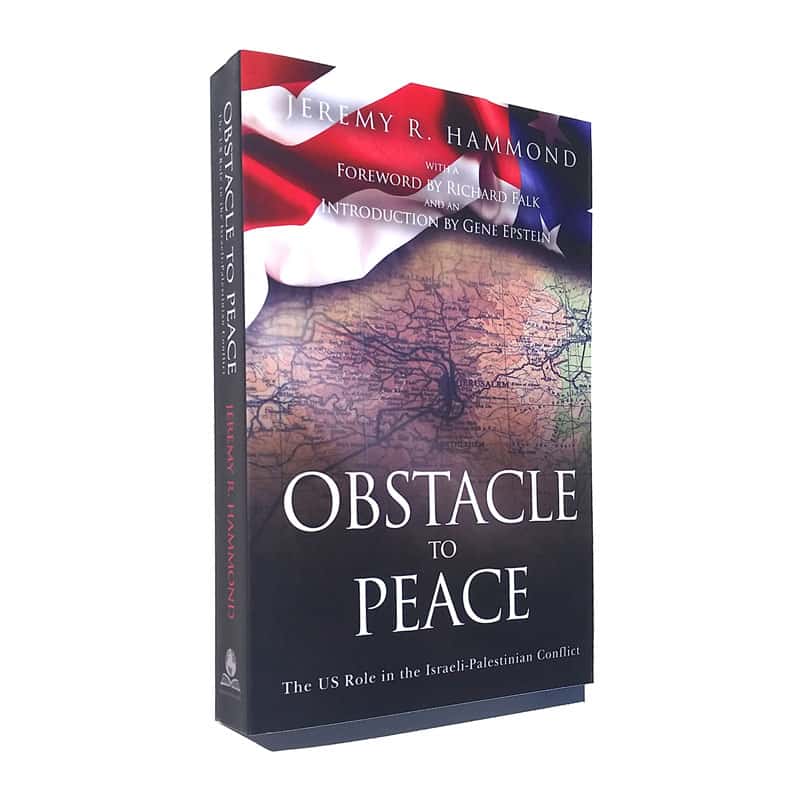 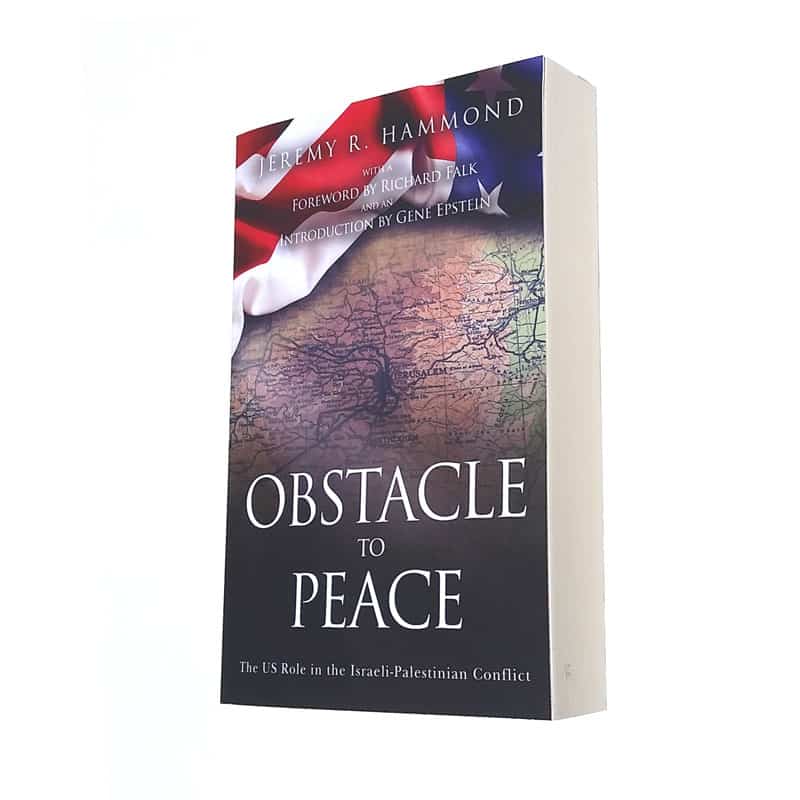 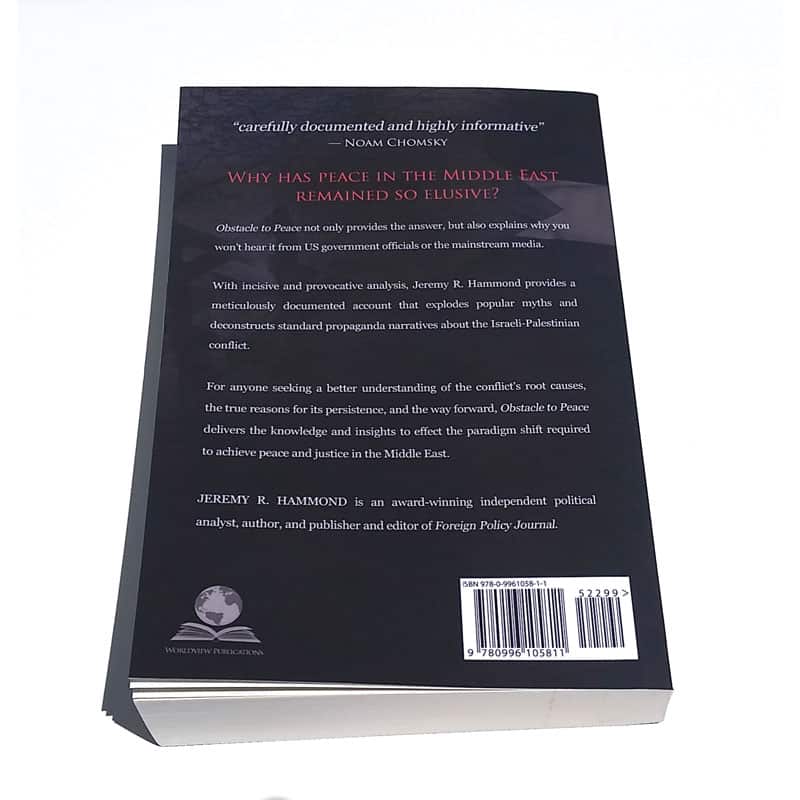 Obstacle to Peace: The US Role in the Israeli-Palestinian Conflict

Get a signed copy exclusively from this website.
Or get the Kindle edition