Paul Krugman and the Myth of ‘Austerity’

A constant mantra of Paul Krugman's is to blame Europe's and the U.S.'s economic woes on "austerity", even though there is none. 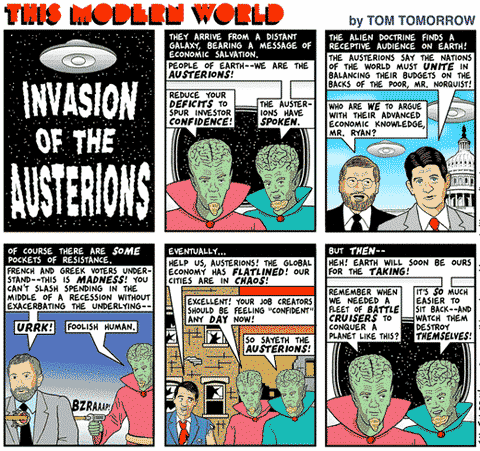 I don’t have anything against Tom Tomorrow. Paul Krugman, on the other hand…. The cartoon accurately depicts a constant mantra of Krugman’s that European countries are examples of the failure of a policy of “austerity”, such as Ireland, for example; and he has even gone so far as to blame the lack of a recovery in the U.S. on its policy of “austerity”, lambasting the government for slashing spending and taxes.

The problem with Krugman’s argument is that is based on pure fiction. There have been very modest, if any, spending cuts in the European countries he likes to point to (see links above), and in the U.S., there are no spending cuts at all, only increases (tax increases, too).

Furthermore, “austerity” in countries like Greece has also been defined by increasing taxes. Krugman points to supposed spending cuts as the problem, but ignores the tax increases. Greece raised taxes and its revenues actually decreased. As I’ve commented previously,

Dr. Mark Thornton has an excellent article titled “Real Austerity” that summarizes nicely the fallacy of blaming Europe’s (much less the U.S.’s) woes on “austerity” in The Free Market journal. Dr. Thornton notes that,

For the economists at the International Monetary Fund, “austerity” may mean spending cuts, but it also means increasing taxes on the beleaguered public in order to, at all costs, repay the government’s corrupt creditors.

In a presumable reference to Krugman (who to my knowledge coined the term “austerians”), he continues,

There is no real austerity in Europe, he writes, other than in eastern Europe:

Latvia is Europe’s most austere country and also has its fastest growing economy. Estonia implemented an austerity policy that depended largely on cuts in government salaries. There simply is no austerity in most of western Europe or the U.S. As Professor Philipp Bagus explains, “the problem of Europe (and the United States) is not too much but too little austerity—or its complete absence.”

While critics of “austerity” commonly attempt to characterize anyone calling for spending cuts as heartless, uncaring about the needs of those who are dependent upon social “safety net” programs and such, Dr. Thornton points out that

What austerity does not mean is that government cut-backs become a form of extortion. The cutbacks should not be in the form of eliminating garbage collection, the police force, and the fire department (unless private competition in these areas are allowed) while leaving the military, the education bureaucracy, and the dozen or so spy bureaucracies’ budgets untouched.

Real austerity, from the Austrian economics perspective, in other words, is not to be confused with “weaponized Keynesianism” (e.g., Mitt Romney arguing against cutting military spending because it would cost jobs). He comments further on the need to cut and not raise taxes:

Real austerity is not adding more difficulties on the productive sector of the economy in the form of higher taxes. The private sector produces, the public sector consumes. The IMF’s idea of raising taxes on individuals to pay off international banksters is bad economics and is not real austerity. In hard times, government policies should be guided by the idea of increasing production, not of making production more burdensome by higher taxes.

Why anyone still takes Paul Krugman — who following the bursting of the dot-cot com bubble called for a Federal Reserve policy of artificially low interest rates to replace it with a housing bubble — seriously is beyond me. (For more on that, see my book Ron Paul vs. Paul Krugman: Austrian vs. Keynesian economics in the financial crisis.)